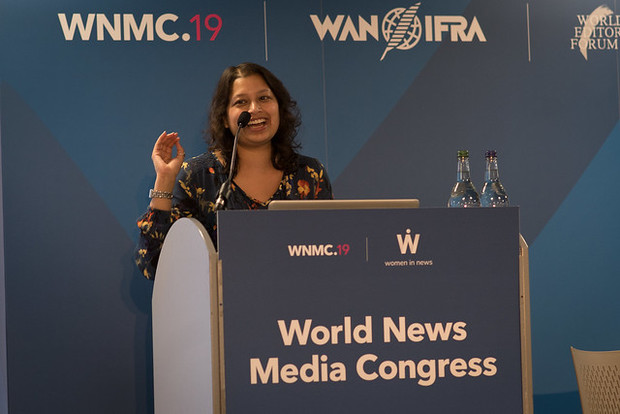 The BBC’s bid to seek a gender balance on its expert contributors has become the broadcaster’s biggest collective action to increase female representation in its content.

50:50, which asks BBC journalists to count the number of men and women across its airwaves in news, current affairs and a range of topical programmes, now has over 550 teams take part in the project on a monthly basis.

Building on the success of a 2017 grassroots project, BBC Director General Tony Hall challenged teams to reach a 50:50 ratio of men to women in expert contributors by April 2019.

Results saw 74 per cent of those involved, who were focused on English-language programming and had been in the project for at least a year, achieve the target – a staggering improvement from the 27 per cent of teams representing men and women equally in their first month of recording data.

These successes were achieved by many programmes including the Andrew Marr Show, BBC Breakfast, The One Show, Politics Live and Radio 4’s Saturday Live, ensuring coverage included a more diverse range of views and opinions.

64 per cent of those that had been involved in the project for just six months had also achieved an equal ratio of male to female voices.

“With these figures, you can see a rising trend – it is clear how gender equality is increasing the longer the teams are involved in the project and monitoring their data,” said Nina Goswami, 50:50 Project Lead at the BBC, speaking at the Women in News Summit, World News Media Congress Saturday (1 June).

The 50:50 project was deliberately designed to be easy to do – teams simply tally up the number of interviewees, guests, case studies and reporters in their output over a month, 1 point each.

“We do have one golden rule – the best contributor always takes part,” Goswami said. “And participants or players in the story don’t count – those needed to tell the story.This is not a quota system, it is about finding the best voices to tell the best stories.”

When the team were looking at the possibilities of 50:50, they questioned whether certain bits of the BBC’s output, such as BBC Arabic, would be able to reach 50 per cent representation.

“In April, I’m pleased to say they proved us wrong – it just goes to show that culture is not a barrier to increasing female representation.”

There have been challenges along the way, Goswami said, with teams suggesting they do not have the time or resources to find expert women interviewees.

As a result, Goswami and her team took on the challenge themselves.

“We put a call out on social media and also asked our colleagues for the expert women they knew.  We then created a central database that the whole of the BBC can use and draw on,” she said.

There is now over 1000 expert women names on it, and it keeps growing.

“We have our mission to inform, educate and entertain, but we can only do that if we are representing the whole audience,” she said.

Over 20 external media partners have signed up to replicate the idea themselves including the Financial Times and The Voice of America, and the BBC is inviting other broadcasters to get involved.