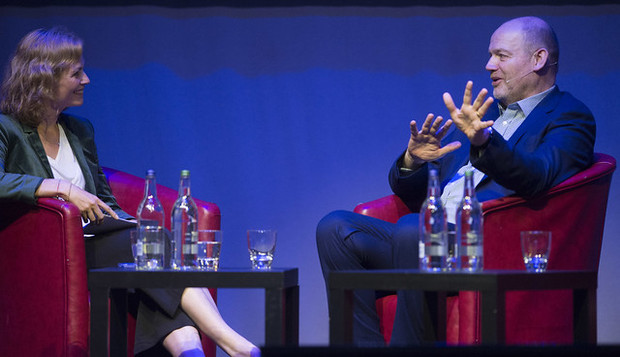 Among other insights, he shared why he believes innovation is regularly “murdered” by executive decision-makers, why the success of The Times’ Daily podcast has led to the creation of an entirely new audience, and whether he is more alarmed by Donald Trump or the Brexit saga.

While the NYT has undeniably benefited from the ‘Trump bump’, it’s always tempered by the knowledge that the rise of Trump’s particular brand of politics was as a result of some major societal trends that have been mirrored in Britain. Despite those similarities, Thompson argues that America is better placed to deal with the symptoms, if not the cause:

“There’s more than one way a country can screw up its politics. The idea that we can reinvent ourselves, and we can come back with new ideas, that is very present in the US. You can feel in the UK this creeping paralysis, [a sense that] ‘maybe we can’t change’. I now think Brexit is a play by Samuel Beckett.”

The core of the NYT will always be its news

With the stated goal of reaching 10 million digital subscribers in the next few years, there actually has been a lot of buzz about the NYT’s other subscription products, such as its standalone crossword app and upcoming parenting product. Despite that, Thompson is keen to note that the core of the business will always be focused on quality journalism, which has allowed it to exist as long as it has, and is now part of a virtuous circle of reinvestment:

“To be honest, the business of the NYT is about making the main news, opinion and feature-based NYT edition. Investing in that is by far the biggest thing we have to do.

“If you invest in newsrooms, you get the best journalists in the world, people will want to consume it. They fall in love with the product, and the money they pay will pay for more journalists.”

He compared The Times’ continued investment to that of Netflix’s pouring money into creating high-quality television conent.

Innovation isn’t something that can be dictated

While it is often the executives and chief editorial staff within a media business that receive the lion’s share of the credit for innovation, Thompson notes that true change is often driven from the middle of an organisation, from “your most disputatious and maverick colleagues”, and that the role of a manager is sometimes just to get out of the way:

“I don’t think innovation happens with senior leaders; it’s about not getting in the way of it. It’s not going to come with a business plan that makes much sense… a lot of this is about creating spaces where people can just try stuff,” – Mark Thompson

He cites The Daily, the NYT’s podcast product that has outperformed the NYT’s expectations, as an example of innovation that was forced onto the team by the political realities after Trump’s election. He noted that the team began work on the podcast before there was any revenue structure in place to support it:

“We thought ‘we should be doing this podcast right now’… before we got any revenue in place… and the team just spooled it up. By the time we launched, we’d got great launch sponsors; we’d promised BMW that they’d get 750,000 listeners in this launch phase. We gave them 43 million.”

Almost half of The Daily’s 10 million-strong monthly listeners are under 30, and Thompson is open to shaking it up again, noting it is “not inconceivable” that it could eventually be spun off into its own paid-for product.

As with the success of The Daily, the NYT is making forays into television with The Weekly. He believes that while the show will deepen engagement with the NYT’s subscribers due to showing the realities of journalistic work, complete with hardships and shoeleather journalism, the show will benefit NYT’s bottom line as well:

“We hope it’s going to be like The Daily and help people understand what our journalists do – I think some people think we just make this stuff up, but they will see that we really get out there.”

“This show has been commissioned, so it’s a cash-positive thing already, but if it works, I think we can get scale like we’ve done with podcasting.”

Thompson noted that around 49 percent of the NYT’s staff are now Millennials, compared to 20 percent when he initially took the reins. That is a tangible change to the paper’s internal makeup, but Thompson also notes that in order to become as flexible as start-up and challenger brands, a more radical transformation was required:

“We’re trying to celebrate our failures as well as our successes. Lots of things don’t work,” – Mark Thompson

“One of the things I’m most proud of was NYT Now, something more immediate, more visual, for phones,” he said. “Everyone loved it, but no one subscribed… we took everything we learned from it and reverse engineered it into our main product and got a 3-year jump on the future from this thing that didn’t work.”

… but not quickly enough

Despite that, Thompson noted that Netflix’s Reed Hastings has asked him what was taking the NYT so long to adapt and change. He said that he personally felt the rate of change within the company needed to increase:

“We’re faster than we used to be, [but] when I benchmark against the top digital companies, we’re still too slow and too cautious,” – Mark Thompson

The challenge of platform crossfire

In response to a question about who the NYT considers its primary competitors, Thompson echoed comments from previous WMNC panels. He argued that we have yet to hit truly fierce competition for attention, advertising revenue and even subscribers between news publishers. He did say, however, that the dominance of the platforms can have deleterious effects on publishers generally, even when the platforms do not intend it:

“Google’s absolute determination to be the best search engine meant they penalised publishers who had paywalls, but they’ve changed that. Google didn’t have the intention of hurting publishers, I believe, they were trying to have the best possible search.”

While the supposed battle between publishers and platforms has led to countless articles, Thompson is more concerned about something far more tangible, something with ramifications that are potentially larger still than a platform turning off a traffic spigot. He believes that reaching younger audiences is paramount for the future success of the NYT:

“I think as an industry, our biggest risk is not from the platforms but from a demographic that ages, and that you can’t reach people that are younger. We’ve never been a youth brand, it’s never been our intention, but our aim is to be a lot stronger with people who are in their late 20s.”

As a result of that, the NYT’s editorial focus is now increasingly on matters that are of particular importance to younger audiences. He specifically cited gender issues as one source of articles that can engage young people – and hopefully secure the future of The New York Times.

The differences between the BBC and NYT

Stiegler questioned Thompson about the key differences between working for the British state broadcaster the BBC and America’s premier quality newspaper. He explained:

“It’s America, and that means something around a spirit of trying things. In my experience… there’s just more of a sense of the possibility of reinvention. One of the reasons I took the job, I met enough people at The Times to believe they were serious about change and would do what it takes.”