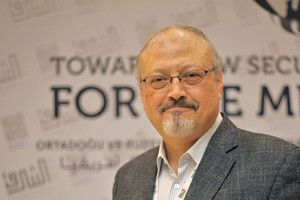 The special rapporteur’s findings used recordings obtained from inside the consulate in Istanbul where Khashoggi was killed to piece together events, concluding the death of the journalist to be “an international crime.”

The report showed “that the execution of Mr. Khashoggi constituted a violation of his right to life” and concluded that Khashoggi was the victim of “a deliberate, premeditated execution, an extrajudicial killing for which the state of Saudi Arabia is responsible under international human rights law.”

On 2 October 2018, Jamal Khashoggi entered the Saudi consulate in Istanbul to get documents related to his upcoming marriage to his Turkish fiancée Hatice Cengiz. But he never came out.

For the next two weeks, the Saudi government denied any knowledge about Khashoggi’s whereabouts, claiming that he had left the consulate after an hour. On 20 October, state television finally reported that he had been murdered in an operation ordered by an intelligence officer.

Conflicting information about his disappearance continued, with differing reports on how Khashoggi had died. More than a month later, Saudi Arabia’s attorney general admitted that Khashoggi had been given a lethal injection inside the consulate and that his death had been premeditated.

Acknowledging the deliberate attempt to cover up Khashoggi’s death, the UN report went on to heavily criticise the secrecy and culture of denial around the journalist’s murder. “This violation [of the right to life] has been compounded by Saudi Arabia’s failure to effectively investigate the execution and fairly prosecute those responsible. The secrecy attached to both the investigation and the prosecution also violates the right to know and the right to truth of the international community, his family, friends, colleagues and many around the world who also have a right to know what happened to Mr. Khashoggi; to know the nature and extent of Saudi Arabia responsibilities, the identity of the mastermind and of the other perpetrators and their respective roles in the execution of the premeditated murder.”

“WAN-IFRA continues to be appalled by the lack of justice surrounding the murder of Jamal Khashoggi,” said WAN-IFRA CEO, Vincent Peyrègne. “We sincerely hope that Saudi Arabia takes stock of the conclusions highlighted by the special rapporteur’s work and responds accordingly, and that the international community continues to pressure the Saudi authorities – including Crown Prince Mohammad bin Salman – to bring both the perpetrators to justice and the masterminds into the spotlight. This culture of impunity for crimes against journalists cannot be allowed to persist – there can be no ‘business as usual’ with regards to states that so blatantly flaunt international law, disregard the right to life, and quash freedom of expression.”

Read the full report by the UN special rapporteur here