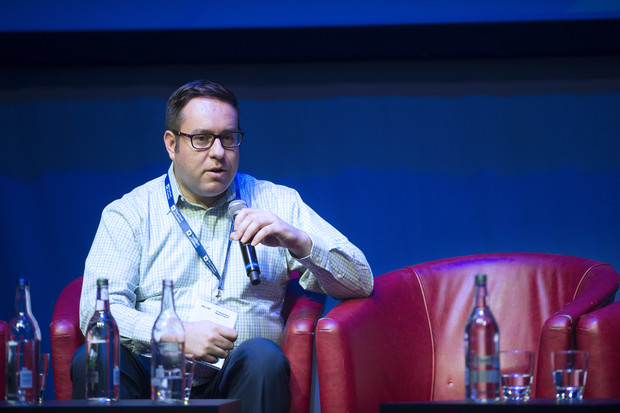 And they are doing just that, according to Jason Jedlinski, SVP of Consumer Products for Gannett’s USA Today Network (pictured onstage in Glasgow).

“We’re up to about 540,000 subscribers across 109 newspapers,” he told delegates at WAN-IFRA’s recent World News Media Congress, though he noted they are still very early in their journey.

Jedlinski discussed some of the ways the company encourages people to pay for content and described the three main approaches that are proving to be beneficial to them.

First, he pointed out that globally, the metered paywall model, which typically uses from 3-10 free articles and which has sustained media companies across the world for several years, is no longer the dominant model.

“Now you’re seeing a blend of people locking down certain content, or locking down all content, and experimenting with different paywalls,” he said. “At Gannett, and the USA Today Network, we still have our metered paywalls across 100 newspaper markets, but we are doing a lot of experimentation with hybrid and premium models and also dynamic.”

Noting that local media do not have the same budgets for technology as the big players, he said it’s important for smaller brands to experiment to find out what works best for them within their market(s).

For the USA Today Network, Jedlinski said the Key Performance Indicator (KPI) for deciding which paywall best suits a brand is the “meter stop rate,” which is the point where a reader can no longer access content without paying.

As part of a test in a few of their markets, Gannett found some success by putting high school sports content, a topic that appeals to a loyal audience, behind a hard paywall, while keeping the rest of the site metered. “This is the fremium model, and it’s also been popular in parts of Europe,” he said.

In another experiment, they removed their metered paywall completely at their newspaper in Burlington, Vermont, and saw a 16 percent increase in subscriptions from the baseline in the first eight weeks.

A third test that Jedlinski said was a huge success was installing a metered and hard paywall together, which resulted in a 117 percent subscription rise in one of their newspapers in Delaware. This model doubled the number of people who hit the paywall, and thus hit the meter stop rate, he said.

“The key insight and takeaway here is … if you think about your goals for consumer revenues and subscription plans, are you really aiming hard at that number of people who get to your paywall? Because then you can do plenty of things to make credit card processing go smoother, etc., but you don’t even have that customer at the cash register until they reach your paywall,” – Jason Jedlinski, USA Today Network

Audience quality, along with size, is crucial, he said. “What are the ways you are engaging the readers, planning on pulling them in and building tactics to get them to return? In a consumer revenue focused model, we have to turn our reach into greater depth and more time spent,” Jedlinski said.

Objectives aligned with conversion funnel“Readers are different,” he continued. “Think about your audience goals while picking stories or coverage areas. By getting a sense of where people are spending their time, and not merely the total page views, we tailor our content.”

Over a three-month period for 20 of its newspapers, Gannett found that regardless of whether a reader was a subscriber or not, that strong, core, local topics such as weather, taxes, politics, education and healthcare drew people in.

However, they saw a spilt when it came to areas like dining and high school sports, which are more appealing to a subscriber. Topics for which you have a specific momentary need such as elections and real estate came from more casual readers who might never turn into subscribers.

“We try to serve such casual readers with more advertising or find other ways to engage them that would benefit the company, rather than pushing them to subscribe, when we know that is not going to materialise, statistically,” – Jason Jedlinski

Furthermore, it’s worth remembering that sometimes small changes can make big differences. For example, while the USA Today Network’s mobile sites had a navigation feature that a reader could swipe over to see the various sections of the website, but not many visitors, who were mostly coming from social channels, did that.

Therefore, they decided to make better use of that real estate by replaced it with a prominent subscribe and sign-in button.

“It wasn’t something revolutionary, but we saw more people checking out our costs by virtue of the button just being visible,” Jedlinski said.

A prominent subscribe buttonFor their desktop websites, Gannett made the subscription button bigger, bolder and part of the main navigation. These sites also greeted people by their names when they logged in, and expanded the self-service options.

As a result, he said acquisition increased 65 percent on desktop and about 17 percent of the company’s total subscriptions – both print and digital – now come through that.

“It’s not a big technological feat. No artificial intelligence. No giant customer database. This is just an A / B, which lane are you in. But we’re seeing customer satisfaction and customer engagement increase because we are acting like we know you. So again, even if you are not The Wall Street Journal, you can find ways to tailor the message,” – Jason Jedlinski