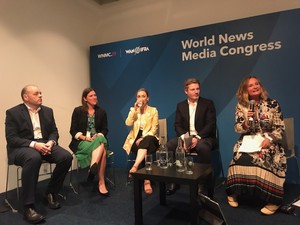 “Innovation”: the word is on everyone’s lips – but few actually practice it in their day-to-day jobs. The News Labs and Innovation session at the World News Media Congress was an opportunity to hear from leading professionals in the front lines of news innovation.

Read on to find out how leading experts in the innovation community are approaching AI, machine learning and voice in their organisations.

As autonomous driving becomes a reality, it will completely change what users expect from their cars. This will force car manufacturers to radically rethink their products, said Frédéric Sitterlé, Director of Development at Groupe Challenges.

If car makers fail to do this, other industries will be ready come in and offer their services to enhance the driverless on-board experience, Sitterlé said.

“It’s a choice between an Apple-like destiny, or becoming the Foxconn of the automotive industry.”

As more and more people will be able to enjoy autonomous driving in the future, it will create entirely new media consumption opportunities. “That will provide hours and hours of available attention, which we in the media can use it to provide value.“

This is why Groupe Renault invested in Groupe Challenges, a French magazine publisher: together with Publicis Groupe, a French communications company, they are building Augmented Editorial Experience (AEX), an initiative that aims to create a new distribution network for the autonomous on-board experience.

The first prototype of AEX was introduced last year at the Paris Motor Show.

AEX is being created following a few leading principles: first, the on-board experience should be based on premium content: “It is all about knowledge and content that makes you grow,” Sitterlé said. Second, the experience it offers should be contextualised and personalised based on the people in the car, the environment and the time of the day. Third, the product should have a deep support of voice commands (“the best way to interact with the system”).

Finally, the experience shouldn’t be limited to the car, but should accompany the user before, during and after the drive, thanks to integration with their smartphones.

“Car is becoming something positive again: sustainable, easy to use, and thanks to AEX, it helps you learn when you travel,” Sitterlé concluded.

The R&D lab of the New York Times has gone through multiple iterations over the years. Lately it has focused on near-term innovations and their impact on news consumption. “We look at what’s happening 2–3 years into the future, and make sure we make prototypes that are actionable for the organisation,” said Kourtney Bitterly, R&D Lead at the Times.

The rapid rise of smart speakers, especially in the US, has lead the lab to investigate how people use these devices, and what new opportunities the medium could offer for content.

“We do design-thinking research,” Bitterly said. “We spend a lot of time with people in their homes, interviewing and observing them.” For the project on smart speakers, the team conducted in-depth interviews with close to 25 people.

One finding that arose from the interviews was that many smart speaker users saw the device as a way for them to mediate their use of technology, Bitterly said. “People said that phones beg for attention, but with smart speakers they felt like they have more control over tech in their lives.”

Based on the lab’s observations, peoples’ use of smart speakers tends to fall in three modes:

Regarding news on smart speakers, the medium is still largely undetermined. “This feels like an opportunity for us as publishers to create use cases,” Bitterly said. One approach could be based on addressing the news fatigue many people feel: smart speakers could act as a throttle to the constant influx of content in people’s lives.

At the Times, the company has already rethought some of its own audio products: the publisher has released six experiences for Amazon’s Alexa, including the relaunch of the Daily podcast, Flash Briefing and News Quiz. “These are experiments we are trying to learn from.”

“AI is not a tech trend anymore,” said Robyn Spector, Director of Corporate Strategy and Development at the Associated Press (AP).

“59% of news organisations say they are using AI in their newsrooms for content recommendations, according to a Reuters study,” she said. “We have seen it grow and explode with the digital disruption.”

At the same time, news organisations are expected to produce much more content than before. This is reflected in the workflows of individual journalists: “They’re filing from the field with their laptops, they capture video and audio, and so on. Journalists have to be one-man bands,” Spector said.

“Our goal with AI is to give journalists the superpowers they need to thrive in this new news climate.”

The AP’s first AI project dates back to 2014. Working with the start-up Automated Insights, the news agency created natural-language generation templates that it to amplify its corporate earnings coverage. Previously the corporate earnings team produced 300 stories a quarter. With automation, they were able to scale this up to cover the whole stock exchange.

More generally, the AP aims to create AI-based tools that automate the non-creative parts of journalists’ jobs, so that reporters can focus on higher-level tasks. The goal is to give journalists the ability to “break news faster, dig deeper and get better insights,” Spector said.

Some advances in the area include: a tool that uses NLP to detect breaking news on social networks; a tool for verifying user generated content; creating automated story summaries for all the articles AP releases (with human editors overseeing the process); automatic transcriptions for video clips; and automated image recognition that groups and tag images.

“The point of all this is to make content smarter and make it travel faster through the pipes of other news organisations, so that you get as quickly as possible what you’re looking for,” Spector said.

Finally, she highlighted the growing issue of the “innovation gap”, which will likely get worse as technology evolves: “The New York Times and the Wall Street Journal have amazing R&D labs and innovation centres. But how can we make sure smaller, local organisations have the resources they need to be part of the conversation?”

The final presentation of the session was by Mark Devlin, CEO of NewsBlocks, a start-up that is attempting to create a new layer in the news ecosystem based on blockchain.

Although the news industry has moved on from print, we still read news in the form of articles that were designed for the paper age, Devlin said. How could we advance and reconfigure the news for the age of digital data?

“Imagine that there’s an article about Yoko Ono: it will almost certainly mention that she was married to John Lennon, and that Lennon was murdered in 1980. That’s three pieces of data that are trapped in the article,” he said. “In print you expect it, but on the internet they should be set free so that you we can do new things with them.”

In Devlin’s vision, collecting data from news articles on a massive scale, as well as the relationships between the data points, would open up entirely new opportunities for the news industry.

“It’s a once-in-a-lifetime opportunity for a company to collect, safeguard and sell that data.”

NewsBlocks plans to do this through a four-step process: first, the company is using algorithms powered by machine learning to convert news articles into structured data. Second, it aims to use blockchain to verify if a piece of data has been reported by at least two sources. Third, the firm aims to store all the data in a distributed network, making the data always available and resistant to censorship.

Finally, the company’s ambition is to use the verified and distributed data to create a data marketplace, which would allow anyone to use the data in their apps. “The key part is that every piece of data has a defined price,” Devlin said. “At the moment, there’s so much discussion about subscription models, and how much can we get people to pay for news. But nobody really knows the real cost of a piece of news.”

Showcasing its technology, the company has already built NewsLines – “a kind of Wikipedia for news” that organises data in a news timeline.

Devlin closed his talk by discussing the state of funding that is available to media start-ups, calling on larger companies and news organisations to be braver with their investment strategies.

“It seems companies really want to pick the winner. News organisations would rather wait and see if something succeeds,” he said. “But how can something succeed if they haven’t been funded from beginning?”