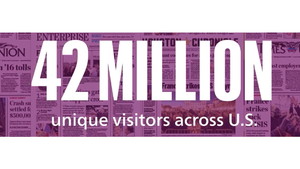 “My team’s job, in no small part, is to ensure a business future for the company. We do that by growing audiences and growing revenue. And we can’t do that and be disconnected from content, from the journalistic mission,” Barrett added.

What that means in practice is that he and his team listen to a lot of ideas from editors, sales leaders and other newspaper staff for outlets such as new mini-sites or vertical sites that are aimed at growing audiences.

Hearst owns some 360 companies, including about 75 community newspapers across the United States (the largest being the Houston Chronicle and the San Francisco Chronicle), which together regularly reach 42 million unique visitors in the country.

The conglomerate also owns numerous magazines, including Cosmopolitan and Men’s Health; 34 TV stations; cable TV networks, such as ESPN and A&E; Fitch Group, a global financial services company; and many other enterprises.

Noting a lesson he’d learned while working for a previous employer, Barrett said, “There was a big schism between the local groups and the corporate central team. It was very much a ‘Here’s your template’ situation and not a lot of dialogue. I promised myself that I would not have a corporate team that was like that.”

He and his team aim to help individual news sites create something that will work in their specific market.

“What we have tried to do is work with local ideas to validate them, rather than impose a lot of central ideas.”
– Robertson Barrett, President of Digital Media, Hearst Newspapers

Part of this process is establishing a “local product lead” – a staff person at the newspaper who takes ownership of the product and helps develop and guide it.

This person might also be called upon to help other newspapers in the chain that are interested in developing a similar product.

For example, the San Francisco Chronicle has a product called Datebook, an arts and entertainment guide for the San Francisco Bay Area, which combines news with an events calendar. Staff at the Houston Chronicle expressed interest in launching something similar for their market.

The local product lead in San Francisco went to Houston and gave the full leadership team a detailed presentation about the product and how it worked, Barrett said.

“They want to have a great local entertainment website with mobile and social built in, and the first thing he talked about was everything that it took for him to do this in San Francisco with my team’s help,” he said.

Going beyond the meter

With another product, Hearst started using much of the same infrastructure to create a dynamic meter, he said.

“This was simply going from having a fixed number of clicks free to being based on the individual user. So if they are a heavy sports user, they may be a better candidate for a prompt earlier on to subscribe, or to subscribe to a sports product,” Barrett said.

“We found that we get a lot of mileage out of playing with the meter, but the meter itself is no substitute for the right product, the right content. This is something that can be a multiplier.”
– Robertson Barrett

While his team is not really a marketing team, Barrett said much of what they do involves imagining how consumers will use a product “and then coming up with the kind of messaging and campaigns and promotions that are necessary. But the product itself has to work the way that people’s brains work.”

For example, a sports product would need to have a “seasonality factor,” taking into consideration a given sport’s on- and off-season, and provide news and information according to what is going on during the various stages of those seasons.

Using data to focus on those most likely to subscribe

A few years ago, Hearst lacked a common data infrastructure among their newspapers, so they were unable to easily compare the data of one paper with another, or groups of other papers.

However, Barrett said, they have since merged their systems using the Google stack, and they can now see patterns of subscriber behaviour and other trends.

For example, today, Hearst provides their newsroom staffs with data about how their work performed with subscribers, as well as with those who are considered likely to subscribe, he said.

“We stopped worrying about people who were coming in on the premium sites who were one-and-dones, or international visitors, because they would never subscribe,” said Barrett.

It takes a lot of work to get yield out of that data, he said, but their goal is to get more people visiting their premium sites at least three times a week.

“We’re finding that different users have different value to us. This has really come up in subscription sites. What that means is that if we serve too many ads, we alienate potential subscribers.”
– Robertson Barrett

“We could do this manually,” he continued, “but we started running machine-learning models on these templates so that in the future, we will actually have an algorithm decide which ad map you get, and that will take our revenue efficiency up a lot. But you still can’t do this without understanding what the content experience is, and how does it play, and what about direct sales?”