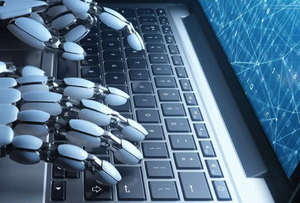 It’s a normal day and on the way to your office you open your news app and start reading a story.

Rarely do you give much thought as to who wrote it.

But it might not be long before you start wondering if the story was written by a human or a robot, because the ripples of robot-journalism might have reached India, too.

Across the globe, leading media organisations have been adopting bot-assisted journalism.

While Bloomberg has been using its bot “Cyborg” to generate stories on financial results of companies, the Washington Post’s “Heliograf” has been assisting its journalists to produce stories during elections.

At Forbes, the main mandate of the bot “Bertie” is to help reporters with templates for news stories.

In India too news reports by robots might not be too far.

Neerav Parekh, founder and CEO of artificial intelligence startup Vphrase, points out that his company is in discussion with two top business media channels to deploy the technology.

“While in India it is not picking up as fast abroad, there is great interest from business news media. We are talking with the top two business media channels, and they are planning to do the live market commentary and financial statement analysis through robot,” –  Neerav Parekh, CEO of AI startup VPhrase.

To put it in perspective, there are about 4,000 listed companies in India that publish their financial results every quarter, he says.

It is humanly impossible to analyse the results of all the companies and write stories on them.

This is where the bot chips in.

With the results in hand, the robot can generate stories on all the companies in about 30 minutes.

The application of automated journalism also extends to stories on elections, sports matches, weather, periodical government data on inflation rates, crime data and so on.

“Wherever you have numbers underlying the story, you can use a robot to write the story. Those data sets can be automatically summarised and explained using robot-journalism,” Parekh explains.

All it requires is some initial training where data and business scenarios are fed in to the bot.

Magdoom Mohamad, Managing Director – WAN-IFRA South Asia, is confident that in India too the time when a story is written by a bot and edited by a human is not far away.

“Using bots also throws open new discussion in the context of menace of fake news. Should news media companies declare that the story is written by a bot is a moot question” – Magdoom Mohamad, Managing Director – WAN-IFRA South Asia.

Across the world news automation has been picking up. In Sweden United Robots, which is partly owned by media company MittMedia, developed its own NLG system for news generation, Rosalinda.

In the UK, RADAR (Reporters and Data and Robots), a local news agency formed by a partnership between Urbs Media and the British news agency Press Association and funded by Google through its Digital News Initiative, uses human-authored journalism and automation to produce data driven local news stories for publishers across the UK.

WAN-IFRA recently published a report on this topic featuring several case studies from around the world. WAN-IFRA Members can download it free of charge and it is available for purchase by non-members. Please click here for more details and ordering information. https://wan-ifra.org/node/202044)

Nevertheless in neighboring India it could be a while before robot-journalism becomes mainstream.

The price points being very low, the international players still haven’t shown much interest in selling their technology here. Vernacular languages also pose a challenge for them.

Other factors that could prevent robot-journalism from taking off in India are cheap labour and growing readership base.

“Here people don’t come at a very high price,” Parekh says. “Typically people in India don’t value automation so much. Right now, readership is growing even in print compared to the West where print media is substantially losing readership every year. The moment when it flattens or starts going down is when the rush will begin for automation.”

“We are beginning to test robots on a few data centric stories and would be in a position to deploy them to post a few cycles of test and feedback” – Satyan Gajwani, Vice Chairman, Times Internet.

Now the question is whether robots would replace human journalists and lead to large scale layoffs.

“We don’t anticipate such bots to cause layoffs in the industry. Rather, we believe that it will allow journalists to focus more on producing less commoditised content, which is a critical need for most publications today,” he says.

Fake news and misinformation that pose strong challenges to trust have been pushing publishers to create stories that offer deeper analysis, with the human touch that only journalists can deliver, he says.

Gajwani is hopeful that we are moving out of an era where content was built for discovery on platforms that used to reward speed of publishing or headline management.

If he is right, there would be more of focus on high quality, in-depth journalism that provides a 360-degree view of the subject.

Bots might be able to provide significant support to journalists in such a future.

“Bots will coexist in the newsroom as an aid to the editorial team – the way tools for heatmapping, analytics, A/B headline testing, personalisation and prioritisation exist today – helping optimise their bandwidth so journalists can focus on what’s important,” Gajwani says.

Click on the video below to watch the WAN-IFRA webinar on News Automation at MittMedia with Li LÉstrade.