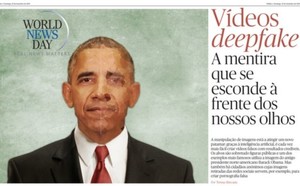 On the eve of World News Day, two new titles joined the campaign to show why journalism and news matters: Publico, a Portuguese national newspaper, and The Telegraph of India.

Newsrooms around the world celebrated the day with special editorial content for their readers via their print and digital platforms. They also promoted the day on social media, and some sent out press releases and news alerts to their readers about their contributions and efforts.

In Singapore, a public forum about the significance of real news and a special video show were also part of the activities. (See video at the end of this post.)

South Korea’s Chosun Ilbo picked up 36 of the 47 articles on WND for its own readers.

Publico carried reports on the issue of deepfakes to mark the day (see the image above), while several titles in Asia created their own editorial specials in print and online, including the South China Morning Post (SCMP), Viet Nam News, The Daily Star and Sin Chew Daily.

Their publications included their own contributions, content from other newsrooms, and commentaries on WND. Asia News Network, an alliance of 24 news titles of which The Straits Times is a member, carried it as its top news highlight of the day.

Many participating newsrooms and other stakeholders highlighted content on the WND website, which carries stories and videos of impact submitted by participating newsrooms. In Singapore, a 30-minute talk show highlighted the legwork and effort that goes into producing credible content by newsrooms worldwide and the difference it can make to the lives of people in different communities.

More than 150 people also turned up for the forum at Singapore’s Institute of Technical Education (ITE) College Central, a career and technical education institute. Speakers on the first panel, comprising regional editors from Sri Lanka, Myanmar and the Philippines attending an Asian Journalism Fellowship program in Singapore, shared their experience in covering conflict in their countries.

This was followed by a session on Fighting Fake News and a third session on stories that changed people’s lives. Participating newsrooms included the South China Morning Post, China Daily, JoongAng Ilbo and both Malay and Chinese titles from Malaysia, together with The Straits Times.

Created last year by the Canadian Journalism Foundation, WND was marked for the first time in Asia, after the newly formed World Editors Forum, Asia chapter, agreed in May to host it.

The initiative grew to a global iniative after WEF-Asia’s founding chairman and Warren Fernandez was elected the global president of World Editors Forum (WEF) in June. WEF is the network for editors within WAN-IFRA, the World Association of News Publishers.