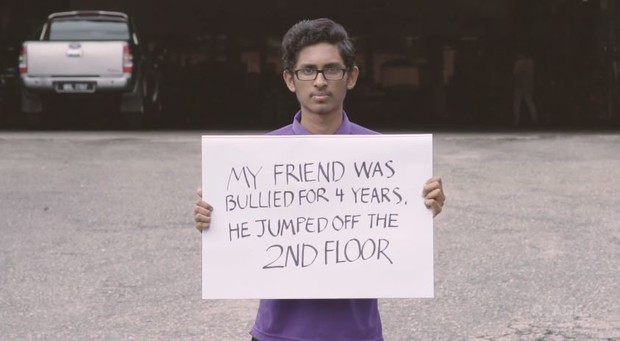 “I was extorted every day for two years. I was seven.”

“They call me Satan.”

“I cried in the toilet every night.”

As the quotes from young victims illustrate, Malaysia was hit by a spate of bullying in 2017, and The Star, the country’s most popular English-language daily, felt compelled to address it.

After consulting stakeholders such as teachers, students, civil society groups and educationists, they found that the typical “anti-bullying” approach is usually counter-productive, since it demonises bullies and encourages even more negativity in schools.

R.AGE, the investigative and impact journalism platform of The Star, came up with an idea to promote positivity by lobbying for a National Kindness Week in schools across the country.

Every year, schools focus on promoting and celebrating kindness on the first week of April, through student-led initiatives and school-wide programmes.

This year, the brand bagged the Best Branded Content Project at WAN-IFRA’s World Digital Media Awards for #StandTogether, a client-sponsored campaign to cultivate a culture of kindness in schools.

Endorsement by the Education Ministry


Following the implementation in 2017, the national Education Ministry endorsed the brand’s National Kindness Week and introduced it in schools across the country.

The #StandTogether initiative is not mandatory, as the company does not believe in blanket imposition on schools that have different needs and contexts. But schools are steadily signing up and to date, more than 1,000 are supporting the efforts.

To empower students to lead the movement, there is a grant fund of 1,000 ringgit (about US$240) for schools that come up with the most effective “Kindness Projects” for their communities.

“In the past two years, we’ve funded 70 such projects across the country and trained more than 2,000 Student Kindness Ambassadors across states,” says Ian Yee, Deputy Executive Editor and Producer, R.AGE.

The brand also ran an online Kindness Challenge targeted at the general public. More than 8,000 people signed up for the week-long challenge, which was conducted via a WhatsApp chat bot that delivered kindness-related tasks daily.

“More than 3,000 participants completed all five challenges, so that’s a lot of acts of kindness, all over the country,” adds Yee.

Screengrab from an R.AGE video

The kindness movement made its way to the Malaysian Parliament, too. As many as 25 prominent Members of Parliament pledged to support the campaign and observe National Kindness Week in Parliament itself.

“It was a huge statement to the Malaysian people for MPs to call for kindness and civility in politics, especially in today’s political climate,”
– Ian Yee, R.AGE

Journalists at R.AGE were thorough in their research and had a strategic roadmap for giving concrete shape to the National Kindness Week. The first step was to look for a sponsor to support the resources that would be used in a country-wide campaign.

“Trying to create a paradigm shift in a national education system is never easy,” Yee says.

A property developer, SP Setia, whose management was also deeply affected by bullying, decided to collaborate on the #StandTogether campaign as one of its corporate social responsibility initiatives. Supporting partners also include Unicef Malaysia, Digi, and International Medical University, amongst others.

The brand avoids blurring the line between editorial content and sponsors’ expectations by being upfront with the reader and transparent about the identity and role of a sponsor in a campaign.

It also always declares the social cause and objective of the campaign, so that the audience can hold both R.AGE and the sponsor accountable if the campaign turns into a blatant marketing exercise.

Does branded content necessarily mean a shift away from journalism? Journalists at R.AGE don’t quite agree.

“I don’t think so, because what R.AGE is doing is more like corporate-funded social campaigns, whose dynamics are different from a regular branded content project. Having said that, if there are clear guidelines in place that can’t be crossed, journalism can survive alongside branded content,” says Yee.

From print to ‘platform agnosticism’

R.AGE started out in 2005 as a print pullout section targeted at college students, primarily through lifestyle and entertainment content but with a strong undertone of serious, issue-based journalism.

It eventually moved online but maintained the content direction. In 2015, the brand revamped itself into an investigative and impact-driven platform.

“Thankfully, it caught on with young audiences, especially after we took a ‘platform agnostic’ approach and published our content across various social media content,” says Yee.

R.AGE currently does not have a print edition or even a regularly updated website. The content goes straight to its social media platforms, while the editorial pieces appear on print on an ad hoc basis.

Congratulations @thestar_rage for this win. #Standtogether is an example of what can be achieved for children in Malaysia through strategic private sector partnerships.

Our student-driven #StandTogether kindness movement has been recognised on the global stage! The campaign received a World Digital Media Award in the UK last week alongside @nytimes, @guardian, @ajplus and more.http://thestar.com.my/news/nation/2019/06/07/malaysian-student-kindness-campaign-wins-on-global-stage-alongside-new-york-times-guardian-aj-etc/ …

The R.AGE team had its big break in 2015, with its first documentary piece, The Curse of Serawan, which investigated the claims of hundreds of child deaths in a remote indigenous village due to a mystery illness. It created national headlines for weeks and sparked conversations about the plight of indigenous people in Malaysia.

R.AGE’s shift in focus from text to video also took place in 2015, because of the shifting consumption trend.

“We were excited about the potential of the medium to put audiences right in the middle of the issues we wanted to talk about,”  Yee says. “Out of sight, out of mind. It is easy, for instance, to dismiss the plight of Malaysia’s indigenous people. But when audiences are visually confronted with it, it becomes harder to ignore.”

In 2016, the brand released Predator in my Phone, an undercover investigation of online child sex predators in Malaysia that sent shock waves across the nation. The series pushed Parliament to pass the Sexual Offences Against Children Act, accompanied by widespread policy change.

“Video is probably the most expensive form of media, at least in terms of content production. Use it wisely and think of a broader communication and amplification strategy around it,” – Ian Yee

Alignment with sponsors is decisive


When R.AGE was launched, it was meant to sound like “our age”, since it was targeting the country’s youth. However, when people began mispronouncing it as “RAGE”, the team briefly considered rebranding during the 2015 revamp. “However, we decided against it when several people said we are essentially telling important ‘stories of our age.’ So, the ‘R.’ stayed,” Yee says.

R.AGE does not have a dedicated branded content team and only takes on sponsored campaigns, such as #StandTogether and the “Work In Progress” series on migrant workers, if they are aimed at resolving a social justice issue aligned with the brand’s work.

For R.AGE, a campaign is not merely about content and branding, but about using corporate funding and collaborations with stakeholders to create a positive real-world impact.

The platform only takes on a “branded content” job if it is in support of a social cause and is confident that the brand that is sponsoring it is genuinely keen on making a positive impact.

“We make this clear to our sponsors before taking them on for a project. We must be aligned in terms of the common social justice goals that we’re trying to achieve,” – Ian Yee

What skills and qualifications must an employee possess to make it to the R.AGE team?

“We look for passion for good, responsible, cause-driven journalism. Inner drive and motivation to do good are hard to come by. Technical skills can be easily taught,” Yee says.

Often it can take months for a campaign to see the light of the day.

“We’re trying to create real-world impact, and that means working extensively with stakeholders to come up with solutions and strategies. And that is usually before we even pitch it to our sponsor!” Yee says.