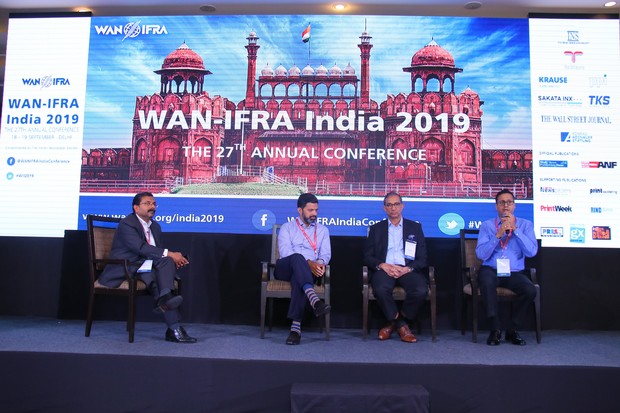 “There is still headroom for circulation growth, but we need to work much harder and reach out to the reader: That’s expensive,” Agarwal added.

He was speaking at the panel discussion on the future of media industry in India at WAN-IFRA conference there last week.

He pointed out that through the years, the print media industry in India, has been content with the support of categories such as real estate, education, automobile, lifestyle and others, which spent huge amounts of money on advertising.

Meanwhile, the industry has lost out on quite a few new categories such as ecommerce, OTT platforms, transaction services and so on, to the internet.

“We assumed they belonged to internet only, and we didn’t think how to attract them,” he said.

However, the traditional advertising categories have been under stress due to the market conditions putting the print dominated organisations on backfoot.

“We need a complete refresh of approaches. It’s a work in progress. As an industry we need to push it much more aggressively,” – Pawan Agarwal, DB Corp

Ranging from the mobile revolution to reader revenue to news aggregators, the panel discussed topics that are crucial in deciding the direction of the media industry in India.

The speakers agreed that their growth has either taken a hit or slowed in the recent years, however they unanimously expressed the view that print still had scope for growth in India if media houses could succeed in re-inventing the way they worked and generated content so as to attract younger readers.

“Advertising is getting fragmented. But to say that digital is affecting print, I don’t see it happening much. It is making its own space in the media spend,” – Sanjay Gupta, Jagran Prakashan

“Marketeers are increasingly realising the potential of social media and other vehicles for marketing their products. Increasingly new (news media) players are also coming in. This fragmentation is leading to not one particular group getting a larger share, but overall advertising is increasing,” he pointed out.

Jayant Mammen Mathew added that digital is a work in progress and unlike print, there isn’t just one single model that might succeed in digital.

“There is more scope for innovation and there is a lot of localisation that we need to do,” – Jayant Mammen Mathew, Malayala Manorama

Whether content should be paid for by the reader has been an ongoing debate in India.

Traditionally, newspapers were sold for as little as Rs 2-3 (equal to approximately 3 or 4 euro cents). The majority of production and distribution costs were paid for through advertising.

With the recent data explosion, India is also among the countries with the cheapest internet rates.

This resulted in the user being bombarded with free content.

In this context, the shift to making the reader pay for news is a major user behaviour change that has proved challenging.

However, the panellists observed that this has been changing, thanks to OTT platforms such as Netflix, Amazon Prime, Hotstar and regional players like Hoichoi that have required the user to pay for some kinds of content during the past few years.

“We have only started taking small steps – e-papers and magazines that need to be paid for. We also launched our OTT platform recently. But in the long term the whole website should be paid. But unless everybody moves in that direction, it would be difficult for someone to do,” he said.

“Once you get a customer habituated to free content, you are going to kill the goose. It is a sure way of killing the newsroom and its appetite to produce good news,” – Sanjay Gupta

According to Agarwal media organisations must value their content first, in order to get the reader to follow suit.

“All of us have spent 50-100 years building credibility in our brand and content engine. It has huge value. Unfortunately, the internet has established that whatever comes through it is free. We, as an industry, have to move together to payment models. We have to invest more in great content and technology,” he said.

While he noted that online traffic has been climbing, he pointed out that newsrooms should nevertheless focus more on direct traffic.

“Traffic is soaring, but readers come to us through other sources and they don’t know which brand they are reading. Google and Facebook will always be there, but we have to build our own business instead of relying on aggregators,” – Pawan Agarwal

The panelists observed that in coming days Indian media would see a paradigm shift with content leaning more towards video and graphics and the way of story-telling changing even for newspapers.

Agarwal noted that in the coming days the main challenges would be producing quality print content that is still relevant to the reader who has been bombarded by social media and identifying newer category of advertisers with whom relations must be built from the scratch.

“Newsrooms and operations are becoming more capital intensive; you need deep pockets to cater to the young audience, which is not easily migrating to newspaper,” Gupta said.

“It is challenging times,” he added. “Newsrooms need to reinvent themselves by going to wider spheres of journalism and giving more content on various needs of people today which is very different from 10-20 years back. Newsrooms should be agnostic of the medium content is being printed or published on. An efficient organisation is what that matters – we have to watch the cost, it’s very competitive out there.”