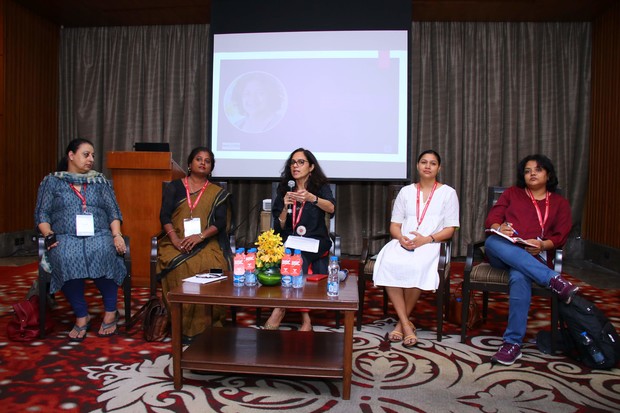 Now, with 17 years of experience, she spearheads digital operations and trains women at Khabar Lahariya, an Indian newspaper, to do fearless journalism.

Devi was speaking as part of a panel on the impact of the “Me Too” movement, a year later, in Indian newsrooms chaired by Ritu Kapur, co-founder and CEO of The Quint, during the WAN-IFRA India 2019 conference last week. Also on the panel were Neha Dixit, an independent journalist; Ritu Sarin, Editor of Investigations at Indian Express; Sandhya Ravishankar, Editor at The Lede.

Devi, who was the first girl in her village to break the status quo and get an education, is now in-charge of 35 women journalists working out of Uttar Pradesh and Madhya Pradesh.

Her motive is not to only bring women into journalism but also to make it representative and inclusive of Dalit, OBC, Muslim and tribal women, amongst others.

“Journalism is not about tokenism,” Devi said.

She co-founded Khabar Lahariya in 2002 as a grassroots newspaper that covers politics, crime, society, culture and entertainment amongst other beats, from a feminist perspective, employing marginalised women.

“I faced challenges in 2002, and I face challenges now; only the form has changed. When I approach a higher up for a quote for a story I am working on, instead of answering my questions, the official is more interested in noticing if I am wearing a toe-ring, bindi and vermilion – the physical signs of a married woman,” Devi said (translated from Hindi).

“Today, access to smartphones and the internet has made trolling cake walk. If I am online during the night, I am at the receiving end of unsolicited calls and messages asking why I am up at that hour,” she said.

The kind of challenges journalists deal with at Khabar Lahariya are far greater than those faced by female journalists in English mainstream publications.

The women at Khabar Lahaiya have been subject to death, rape and abduction threats, asked to issue corrections to stories and take back reports at gun point, but they have soldiered on.

“Our biggest crime is to have been marginalised, women and journalists. We have been repeatedly made to feel that journalism is not a woman’s territory. You can file an FIR or send us to jail, but we won’t stop honest reportage,” Devi said.

Sarin, who covers internal security, money laundering and corruption, has been fortunate enough to not have faced trolling and sexual harassment in a journalistic career that spans three decades.

“Sure, I have faced sexism in the newsroom but after a longish career, I have generally not felt very disadvantaged being a woman reporter. My experience might be stale because I have been in the same Indian Express newsroom was 23 years now,” said Sarin, who was among the earliest members of the International Consortium of Investigative Journalists (ICIJ) that brought us the Panama and Paradise Paper expose.

Half the resident editors at Indian Express currently are women. Sarin’s floor alone comprises 100 women and 125 men. The Head of Desk, one of the most critical operations in a paper, is a woman heading the brand’s largest team.

However, things are not so rosy in most Indian newsrooms. A Media Rumble survey, conducted in partnership with UN Women, brought to light dismal statistics for women in leadership roles, with the figures at 13.6% for magazines, 20.9% for television, 26.3% for digital media and less than 5% for newspapers.

During a span of her 13-year-career, Dixit has been an independent journalist for seven years.

“What women journalists my generation are able to do today is because of the battles fought by our predecessors. From being asked to cover only baby and flower shows, to now covering male-dominated beats, we have come a long way,” she said.

Dixit hails from a conventional north Indian family where women who became journalists are considered “fast.”

“Once, while covering a story on a khap panchayat (kangaroo court), I was told by their leader that they would have killed me right there had I been a woman belonging to their clan,” – Neha Dixit, independent journalist

Another time, Dixit was covering a story about Hindu fundamentalists trafficking girls to Gujarat from Assam and was able to trace 20 of the 31 girls.

“I was held hostage and since I am an independent journalist, I do not own a press card. I was only let off when the men saw me dressed in a dupatta and bindi and assumed that I was a Brahmin (and hence, decent) woman and could not do anything wrong.”

Ravishankar worked in broadcast media for 10 years before setting up The Lede in early 2019. “It was the norm to get molested at street corner meetings or political rallies. We just learned to walk with our arms out,” she said.

Ravishankar covered a story on illegally mined atomic mineral found in Tamil Nadu in January, and has since then, has been a victim of online trolling, rape threats, and visits to the court.

She has been accused of sexually engaging with a police officer, taking a bribe from a rival miner, and spying for a political party.

“I am not aware of circumstances where a man would face similar behaviour for covering a story,” – Sandhya Ravishankar, The Lede

Sarin attributed her good fortune of not having horror stories to not having a social media footprint.

“If I were online and faced with such behaviour, I’d be provoked. To question why one must dignify insult with anger is easier said than done. I like to be fair with a story and give everyone a fair chance to speak,” she said.

Dixit, however, disagrees. “International organisations such as Washington Post and Al Jazeera ask independent journalists for their social media handles, while considering submissions. Scholarships are now given based on the number of followers one has,” she said.

Who decides what the perspective should be on a story? Who decides where a story should be ranked? How much of a difference does it make to have women in leadership roles? How different is it to be an investigative reporter in rural media than in mainstream English media?

“The patriarchal mindset is so deep seated in us that I am waiting for the time when we will be called just journalists, instead of women journalists. When will we stop having panels like Women in News? It should really become an anachronism,” said Kapur.

Sexual harassment, character assassination, families amongst other factors are forcing women to leave journalism. How can the Indian newsrooms hold on to their women journalists?

“If I train 15 women, I can get only two to stay. When they go out reporting and reach home late due to lack of transportation, fingers are raised at their characters,” – Kavita Devi, Khabar Lahariya

Network of Women in Media, an informal collective of women journalists, conducted a survey in 2018 of 50 news organisations in India with 500 women participants, about the presence of an Internal Complaints Committee (ICC) at their workplace.

Only 47% of the women reported working at a company that had an ICC. Of the women who filed complaints, only 6% were satisfied with the outcome.

“A proper support system among women journalists for young journalists who are victims of sexual harassment is extremely important for them to gather the courage to fight,” – Sandhya Ravishankar, The Lede

The “Me Too” wave hit the Indian journalism industry in October 2018, when Anoo Bhuyan, of The Wire, accused Mayank Jain, a Business Standard reporter, for making unsolicited sexual advances. Subsequently, at least 10 women claimed to have been sexually harassed by journalist and politician MJ Akbar.

‘Women in News‘ is a WAN-IFRA initiative that aims to amplify women’s voices in news. It hopes to initiate a dialogue to achieve gender diveristy in newsrooms.

Click here to read WAN-IFRA’s State of Newsrooms in South Asia report. Turn to page 18 for an in-depth account of gender-parity in Indian newsrooms