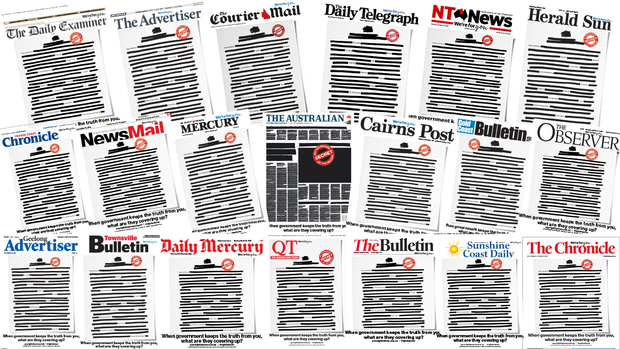 Heavy-handed responses to investigative journalism in Australia have united its news media.

In an unprecendented collaborative campaign, Australians woke to find the front pages of newspapers across the country heavily redacted – as a warning of a future where laws continue to erode media freedom so that governments can cover up information from the public.

The move aims to push the federal government into lifting its veil of secrecy.

It follows more than 60 pieces of legislation introduced during the past two decades which effectively criminalise journalism and penalise whistleblowing, even when they reveal wrongdoing or important information about decisions
the government is making.

The campaign involves every major media outlet across the country and includes advertising across print and digital, radio and powerful television advertisements, which have the potential to reach every adult Australian.

The campaign shines a spotlight on the continued threats to media freedom, which hinder attempts to hold powerful people and organisations to account by intimidating and harshly punishing those who dare to speak out, often when they have nowhere else to turn, according to the coalition’s press release.

It comes after Australian Federal Police raids on the ABC and the home of News Corp journalist Annika Smethurst back in June. Both media organisations are still awaiting the outcome of those raids, including confirmation of whether the targeted journalists will face prosecution.

“Australia is at risk of becoming the world’s most secretive democracy. We’ve seen the public’s right to know slowly erode over the past two decades, with the introduction of laws that make it more difficult for people to speak up when they see wrongdoing and for journalists to report these stories,”
– David Anderson, ABC’s Managing Director

These proposals would also force the government to weigh the public interest before applying for search warrants and launching prosecutions.

The reforms propose effective protection for those who speak out, ensuring there are systems in place to limit government secrecy.

They continue to participate in government inquiries into press freedom and await the findings of these later this year, but are also calling on Australians to voice their concerns and stand up for their right to know.