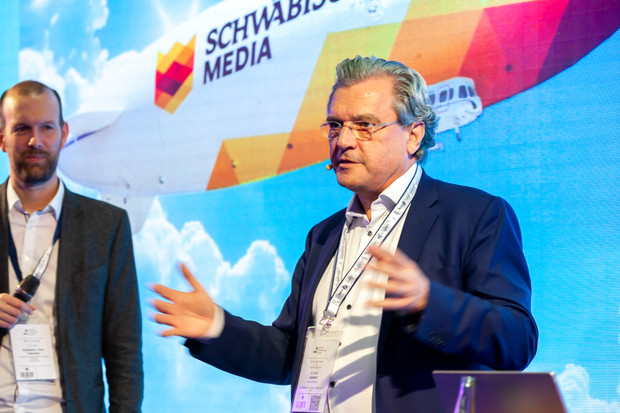 Essentially, Sabathil says, the “Fitness Program” has helped the company to remain relatively stable through one of the most turbulent decades in the news publishing industry’s history.

Based in the southwest of Germany between Stuttgart and Munich, Schwäbisch Media’s flagship newspaper title is called Schwäbische Zeitung. It is the largest newspaper in the state of Baden-Württemberg, the third largest of the country’s 16 states.

In addition to Schwäbische Zeitung, the company also publishes free newspapers and has a wide range of other activities including a postal delivery service through which they deliver some 100,000 letters a day as well as leaflets.

“Let’s face it, our newspaper industry is in big trouble,” he said during his presentation at IFRA Expo / DCX Expo in Berlin last week.

“National advertising revenues are moving to the internet giants and TV,” he said. “Our longtime newspaper readers are dying, and young people don’t like paper. So, it’s a very rough environment, and a lot of newspaper companies will be eaten up by other companies, or go out of business.”

Getting in shape for the future

In such an environment, only the fittest companies can survive, Sabathil said, and to help get in “better shape,” Schwäbisch Media embarked on a Fitness Program to refine its ongoing transformation process, which he launched after taking the reigns of the company 10 years ago.

The Fitness Program is made up of five key components:

A larger, and younger, staff

While most news publishers may well agree in theory about the importance of investing in the creation of good, high-quality journalistic content, Schwäbisch Media has actually been doing it.

The company’s editorial staff has risen by 28 percent during the past 10 years. The number of editors and video journalists has increased by 41, and the total number of employees increased by 100.

Furthermore, they have created several new positions, such as:

And the staff hasn’t only gotten larger, it’s gotten younger.

“It is important to be attractive to young people,” he said. “When you are in a dying industry, you don’t get good professionals, so you have to show that you are not only print but also digital and forward-looking. Twenty-five percent of our employees are younger than 29, and 50 percent are younger than 38.”

They also reorganised their sales department.

“Before we only sold section-by-section, and then we started cross-media sales and a reorganisation where we have some field managers for areas like real estate, or jobs or cars, and then all the areas we have in combination,” Sabathil said. “We also started cross media agency networks and a corporate publishing agency to put together the pieces we have.”

A paywall and podcasts

Like many publishers trying to offset print declines, Schwäbisch Media has been working to increase their digital revenues. They launched a paywall in 2014, and aim to have 30,000 digital subscribers by the end of this year (they had more than 27,000 as of September), with a goal of 100,000 by the end of 2024, Sabathil said.

The company has also developed an extensive Predictive Analytics-Anti-Churn Model that considers dozens of  and assigns each subscriber an individual score between 0 and 10 as to how likely that subscriber is to churn, so that they can take proactive measures to try to retain them.

Furthermore, they have expanded their digital offerings in areas such as podcasts, where they have producecd 158 episodes between December 2018 and July 2019 across a number of topics such as Football, Politics, Local Stories, Personalities, Psychology, and Chief-Editor Talks. Each topic produced between 20 to 40 episodes during the period and generated anywhere between 12,000 and 57,000 downloads per topic.

In addition, Schwäbisch Media has been building out other businesses, especially service-related companies that are natural extensions for news publishers, such as a corporate publishing and content management agency, and a tourism portal. These businesses are helping to build the company’s overall revenue streams and reduce their reliance on the newspaper revenues.

During the past 10 years, Sabathil said Schwäbisch Media has managed to stabilise its total revenue, only declining a couple percentage points since 2008. He said the difference between the German national average revenue drop of 17 percent and his company’s decline of 2 percent is a difference equal to 15 million euros, and this difference equates to 200 employees.

Editor’s note: This text was updated on 17 October to correct the number of staff added, and also the figure in the second to last sentence has been revised to 15 million euros (not 50 million).

For more details on how Schwäbisch Media has been transforming itself during the past decade, see two of our previous posts about them:

Hands up: Are you on the right transformation track?