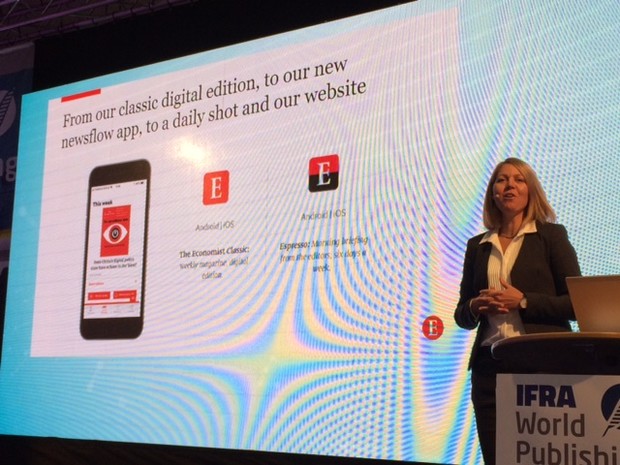 In a keynote presentation Wednesday at IFRA Expo / DCX Expo in Berlin, Marina Haydn, Executive Vice President and Managing Director, Circulation, described how The Economist has been engaging readers to drive business growth.

They’ve been steadily building readership as well, increasing their global circulation from a little below 1.1 million in 2014 to nearly 1.2 million last year.

The three central pillars of the reader-first strategy are:

“We focus deeply on the customer value exchange,” Haydn said.

Reader choice is central to their strategy; the reader has lots of options for accessing The Economist’s content, including print, digital, newsletters, podcasts, and more. “Only if we deliver the value that customers want, can we charge a premium,” she said.

.@TheEconomist’s reader-first approach: not focusing on a specific product type or channel — the reader should be able to choose him/herself.
Presentation by @marinahaydn, EVP and Managing Director of Circulation. #IFRAexpo #DCXexpo 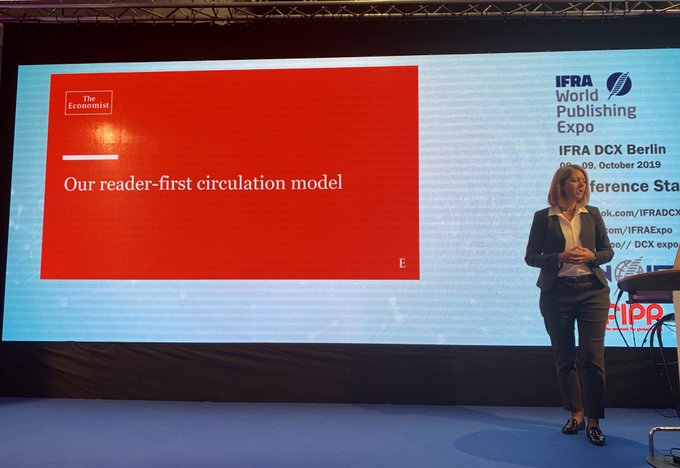 Getting feedback from readers

In order to help ensure they meet reader expectations, The Economist has extensively surveyed their customers to find out “What do they value?” “How are we perceived?”, “What would they pay?” and the like.

Interestingly, they learned that their subscribers actually thought The Economist was charging them too little. Furthermore, their research showed The Economist has strong pricing power across all the markets they studied, including the US, the UK, Canada, Europe, and Australia, Haydn said.

“Our strategy is to leverage The Economist’s pricing power through infrequent but substantial price increases,” she added.

Readers are charged the same amount for either a print or digital subscription, and a bundle of print and digital costs an additional 25 percent. More than half of their readers prefer both digital and print.

“By charging equally for digital and print, we have optimised profitability while underlining product value.”
– Marina Haydn, The Economist

Haydn said The Economist’s marketing approach is also crafted on engagement, and includes:

For example, The Economist has a fairly strict registration wall. Haydn said a visitor to the site can only see the first two paragraphs of an article before she or he is required to register, after which the person can read up to five articles a month for free.

The Economist is also using social media heavily as a key part of their marketing strategy and to bring their journalism to life, Haydn said. “We have refocused our social strategy this year,” she said.

These efforts are paying off: their social traffic has risen 70 percent in six months, and it is now at the highest level in two years. The Economist has a combined 45 million followers across their social media channels. The largest number of followers is on Twitter (more than 24 million) and the next largest is on Facebook. They also have the fifth-largest LinkedIn community in the world. 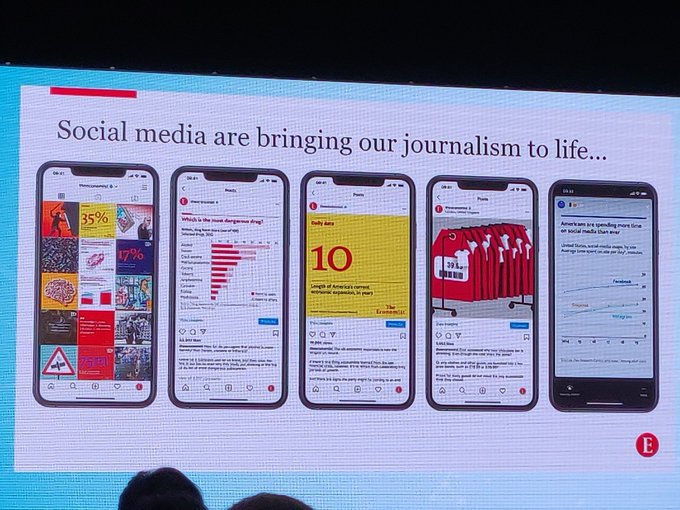 Strategic use of newsletters, audio

They are also using newsletters to boost engagement among registered users and subscribers, with more than 1 million customers receiving newsletters from The Economist every day, Haydn said.

The data they glean from the newsletters provides insight into the content preferences of our customers, she said.

“Traffic is growing and newsletters are now a bigger source of traffic to Economist.com than Twitter.”
– Marina Haydn, The Economist

Since 2006, The Economist has been working extensively with audio as well. For example, they record actors reading each article from the magazine, which their readers can then listen to when they are travelling or on the treadmill at the fitness studio, for instance.

In addition, The Economist has a stable of podcasts that have built up a loyal following since they began doing them back in 2010. Their newest offering in this area, called The Intelligence, launched in January 2019 and has already had more than 17 million downloads, Haydn said.