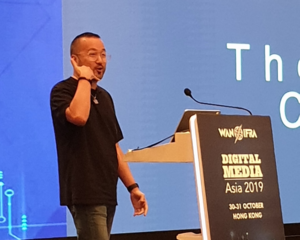 Ma has a long history in the entertainment and music industries and is a co-founder of 88rising, a media company dedicated to Asian American and Asian artists.

“I’m not a hard news guy, but I am a youth guy, and I am passionate about media, entertainment and technology, and how to always reach the current generation,“ Ma said.

For Ma, publishers need to accept that the news consumers of the future do not and will not consume their news in the same ways as generations past – however, generations in this case can mean just a few years.

For example, Facebook, though only founded 15 years ago, is already mainly for older internet audiences, while Instagram and the relatively new video apps TikTok and Triller are reaching younger groups. But it’s more than just what apps people use.

Ma says younger audiences see themselves as content creators as much as consumers, and they need to be engaged in that way.

“This generation wants to be known. They want to be seen, and they’re not waiting for anyone to make that happen. They’re doing it for themselves,” – Jaeson Ma

Even so, Ma said, younger audiences do follow certain social media and celebrity stars closely. These so-called “influencers” can be critical to the success or failure of a media product aimed at younger people.

Also, he said, news publishers need to realise that younger consumers do not use print or even text.

When members of Gen Z – roughly those who are currently 9 to 24 years old – are asked how they consume news, only about 13 percent say print, while nearly 80 percent say social media.

Most of that news is consumed on a mobile device, not a laptop, as well. And video is the medium of choice for younger audiences.

Ma says younger consumers have completely turned away from print and text and gone to social media and video.

Finally, even if publishers can top all of these hurdles and adapt their offerings to younger audiences, one even bigger hurdle might remain, especially for legacy organisations.

‘You have to capture cool’

“Currency is cool. You have to capture cool,” Ma said. “If you don’t capture cool, you lose your currency and ability to monetise.”

For example, Ma said MTV was cool, but over time, due to its programming choices, lost that magic, and newer players like Vice developed a voice that was seen as authentic, creative, and hip – that ephemeral quality of cool.

Author Bill Poorman is a freelance editor, writer, and podcaster, living in Singapore.