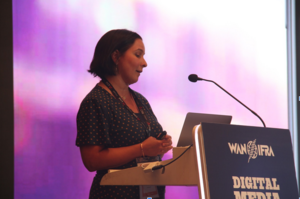 At the Digital Media Asia 2019 conference in Hong Kong in October, Facebook’s Director for News Partnerships-APAC, Anjali Kapoor, talked about the pilot testing of the social media platform’s new “News” tab, which is dedicated to journalistic content.

“This is something that Mark [Zuckerberg] has been speaking about [with] publishers over the past year, about how journalism can look on the platform,” Kapoor said.

“I think the most important thing about Facebook News is that, like Facebook Watch, we’re developing places outside the newsfeed for users to consume more focused content for retentive behaviour. In the case of news, high-quality journalism; Facebook Watch, high-quality video; and Marketplace, building e-commerce,” she added.

Kapoor also explained the potential for growth in the APAC region, where there are over one billion active Facebook users. This is why they set up the APAC News Partnerships group, created teams in the respective region’s local languages, and have been listening to the region’s publishers in the past year and more.

“It’s a region where we see consumer behaviour influencing our products,” she said.

The Facebook Director for News Partnerships in the region said that video consumption is evolving rapidly, with 79% percent of global data traffic being video in 2022. That figure will be nine times what it was in 2017. “Over the years, when it comes to storytelling – aside from being there in person – now with mobile devices, there’s nothing more compelling, persuasive, captivating, than video,” she said.

Kapoor also said the number of viewers who stream on their video platform Watch has grown from 400 million monthly to 720 million.

She adds that, from 75 million visitors in six months spending more than 20 minutes daily on Watch, there is now a 140-million strong viewership in the section that stays for an average of 26 minutes.

But Facebook wants publishers to understand that the social media company is just at the beginning of monetizing videos on the platform with Watch. “We’ve all just begun our run upon building upon Watch and video consumption on services on Facebook. We are taking our time to make sure we get this right, which means now’s the time for innovation and experimentation,” she said.

Facebook allows creators to earn money through video advertisements in the pre-roll and mid-roll or through image ads on top of the video.

“We really do want to partner with news organisations to help develop your audience monetization strategies,” Kapoor said. “We’d love to continue investigating flexible monetisation that fits your business model as you bring users down the funnel, and build close, effective connections with your audiences.”

IMAGE: Facebook’s Director for News Partnerships – APAC, Anjali Kapoor, describes to news publishers how the company’s video offerings are being developed with their business models in mind.

Author Chad de Guzman is a Filipino student journalist from Hong Kong Baptist University, and a scholar of the university’s Master of Arts in International Journalism Studies program.