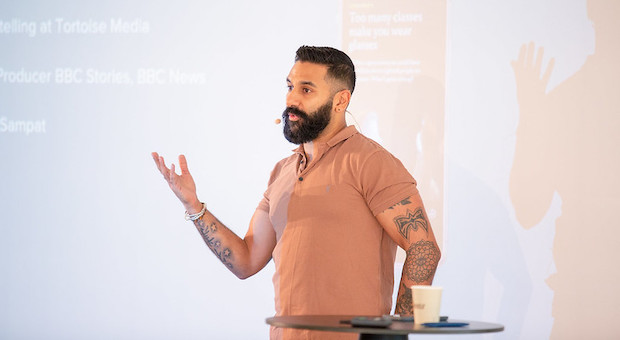 “We don’t do any breaking news,” Ravin Sampat, head of storytelling at Tortoise Media, said during a presentation at WAN-IFRA’s recent Newsroom Summit conference in Oslo.

“We do what’s driving the news. We don’t cover every story, we just reveal a few at a slow pace. We take the time to see the fuller picture, making sense of everything that’s going on around it.”

Tortoise launched in April this year after it raised more than £500,000 (approximately 583,000 euros) via a crowdfunding campaign, and secured backing from eight private investors. Since then, it has gained close to 20,000 members (34 percent of which are under 30), which are heavily involved in the journalism Tortoise produces.

Members are invited to attend so-called “ThinkIns,” discussions revolving around a certain topic held within the Tortoise newsroom (as well as across the UK, and sometimes even abroad).

“Every single night, we open up our newsroom, inviting our members and people they’d like to bring who might be interested in this topic,” Sampat said.

“We hear people’s lived experience. This is how we do our journalism every night.”

The meetings aren’t supposed to work like a debate, meaning questions aren’t allowed, Sampat said. Instead, the Tortoise team wants to hear people’s viewpoints and opinions to learn more about the different ways a topic can be approached and covered.

“The lived experience is the most important thing for us, and we have learned so much from having these sessions held in our newsroom,” he said.

Ahead of every event, participants receive a short primer with information on the topic via email, dubbed “Tortoise Notes,” which is then also distributed during the event. After the discussions, which are recorded and live streamed, the Tortoise team produces a readout, a piece of journalism that brings together all the voices in the room that they heard from, and acts as a springboard for future thought and coverage.

A slow news approach to make sense of the world

Tortoise’s journalistic output tends to revolve around five different themes: “New things,” “Belonging,” “Our Planet,” “The 100-year Life,” and “Wealth.” Members receive access to a paywalled digital edition via the app, tickets to the “ThinkIns,” and copies of Tortoise Quarterly, a print product.

In line with its slow news approach, Tortoise publishes two in-depth stories per day, and an additional two on Saturday, and sends out a daily newsletter to help readers “make sense of the world,” as Sampat put it.

“We look at all the news sources around the world and how they covered a specific event or moment, and we try to get an understanding of it,” he said.

“And if we think there is something interesting, we tell our readers that we will follow up on it and ask them to share their viewpoints or to let us know if there are any other angles we should cover.”

The opinions of Tortoise’s members also inform decisions outside of the editorial realm.

“We constantly get feedback from members via our app, and it’s amazing how often we have changed our product,” Sampat said.

“That feedback loop is massively important for us.”