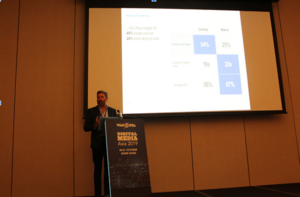 Chartbeat, a content intelligence platform, knows the challenges of aiding publishers in building a loyal audience. But it’s a task that cannot be accomplished without understanding the current trends in reader engagement.

To do so, Chartbeat analysed data collected across 50 billion monthly page views across newsrooms around the world. The findings were illuminating.

The most noticeable trend is the shift from desktop to mobile consumption. Mobile traffic rate continues to increase, while the rate for desktop is in a steady decline.

“Two out of three visits take place on a mobile device. We expect it’ll hit 75 percent within the next two years,” John Black, Chartbeat

But what does this shift mean for newsrooms?

“From the editorial perspective, the very first thing we should be focused on is the mobile-first audience,” said Black.

Pointing out mobile users’ preference for apps over browsers, he added, “The ways people access sites on mobiles are fundamentally different.”

That’s not all. Many of the top, traditional referral sources – such as Twitter – are experiencing a slow but steady decline. Mobile-first aggregators, on the other hand, are doing exceedingly well. One of the few exceptions to the rule is Google and its continued increase of search traffic. But that is more of an exception than the rule.

All those changes, Black said, have a big influence on engagement patterns.

Take direct traffic – an important indicator of the audience’s likelihood to return to a given website. Currently, more than 40 percent of direct traffic takes place on mobile devices. Black predicts that this number will increase to over 50 percent in the near future. “We need to think about homepages from the mobile-first perspective in the coming years.”

Additionally, for the past few years, mobile users have had the reputation for being skimmers, not deep readers. Chartbeat’s findings suggest otherwise.

Using three metrics – scroll, engaged time and click-through rate – Chartbeat discovered that mobile readers are actually more engaged in content than their desktop counterparts. They’re also more likely to click on the stories on a publisher’s homepage. All those findings should bring a change to the newsrooms’ mobile homepage strategy, he said.

“There is a way to optimise those opportunities to increase quality traffic from homepage,” Black said. Mobile optimisation has to be the top priority for all newsrooms, he said. Content creators should try to understand what consumers are experiencing from the mobile-first lens.

And while Google and Facebook continue to be important partners in reaching a broader audience, newsrooms should expand their focus to other sources.

“We should be looking at those other, mobile aggregators and how they can supplement to our traffic sources,” Black concluded.