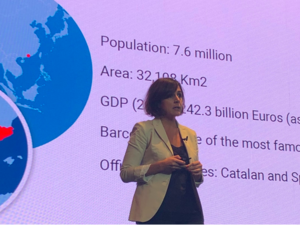 ARA is a local publication with several editions. It saw a sales increase of 5.2 percent in 2018 compared to 2017, and a 15.2 percent increase compared to 2016. During that time, the sector in Catalonia was experiencing a 22 percent fall, Tordera told told attendees at the Digital Media Asia 2019 conference in Hong Kong

After setting up a metered paywall in 2015, ARA created a consolidated business model, unique in Spain’s media landscape, which helped them create a community of 45,000 subscribers.

ARA has developed a special “Audiences First” strategy – note the plural – which is a new approach for B2B and B2C.

Tordera said they analysed the customers first, to define who they are, where they are, what they want, as well as the time and the way they consume, then began creating differentiated content for these audiences.

“We served targeted audiences with targeted content,” said Tordera. “You must change the metrics.”

Using all channels and networks

Tordera also says ARA uses all channels and distribution networks to reach its audiences. She recommended that media companies publish on the platforms that are used most by their audiences, as found through a careful analysis.

“Once we have reached the audience, convert these regular readers into subscribers,” she said.

The process of conversion works like a funnel, she said. In the end, they develop the loyalty of the community, which increases the value of being a subscriber.

Besides Audiences First, ARA has explored other models of revenue, such as their Summer Camp, which is focused on journalism and their services as a communication company.

Even though ARA is focused on digital, Tordera said publishers can’t ignore  their core product.

“Move to a real process of digital priority, without forgetting the quality of the paper. Digital first, paper later and better,” she said.

The author of this post, Carol Yuan, is a year 3 International Journalism student at Hong Kong Baptist University.