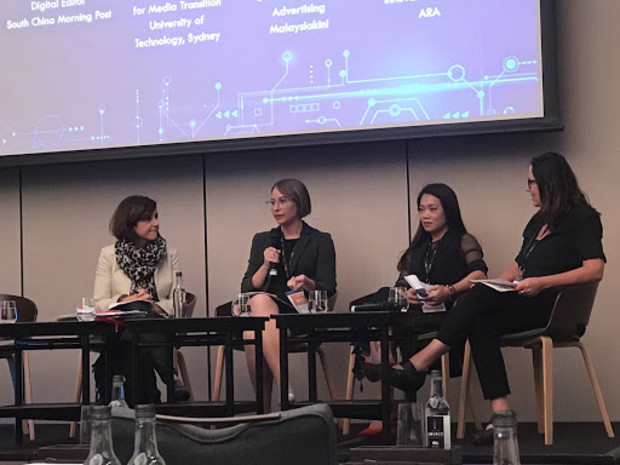 ARA is a Catalan daily newspaper whose headquarters are located in Barcelona.

According to Tordera, women in the newsroom tend to have lower salaries and occupy fewer managerial positions than men. They experience higher unemployment rates and consume fewer media content. Tordera said that this is because it is difficult to find gender-balanced content.

To serve new audiences and balance the genders in readership, ARA built a new vertical community called ARA Feminism this year, putting together the newspaper’s content about gender and women in one place.

Meanwhile, ARA created a database of women experts on a variety of issues. Tordera said sometimes women hesitate to put themselves forward as an expert. To counter that, the newspaper built the database to encourage women to show their expertise and share their opinions.

South China Morning Post also has a newsroom which is relatively balanced in terms of gender, according to Laura Warne. She said women employees are involved in many different roles at various levels in the organisation.

Warne said that her team has been discussing how to provide content that is more attractive to female readers. As part of that effort, SCMP formed a cross-departmental team and broke the problem down into four parts: readership, content women would be interested in, how to tell a story in a gender-balanced way, and how to encourage interactions with and among the female readership.

She said the team dug deep into different topics to find which ones would be a most compelling read to women and set up an internal interface to help the newsroom find women experts quickly. They also encourage all readers to contribute to their stories and hope more women will step forward.

Malaysiakini is an independent online news portal which is largely focused on political content. It is unaffiliated with the Malaysian government.

Chia said about 80% of Malaysiakini’s editorial positions are occupied by males, and only 10-20% of their female readers read political content.

“That means the education about politics in Malaysia is not enough for women,” Chia said.

On International Women’s Day this year, Malaysiakini organized a campaign to encourage women to be more politically aware and why they should speak out.

She also remarked that it is important to reach and understand readership – who they are and what they want – and provide content that they are willing to pay for.

Park also suggested that human resources structures in news publishing companies should be transparent and professional so than gender balance and equality in newsrooms can be ensured.