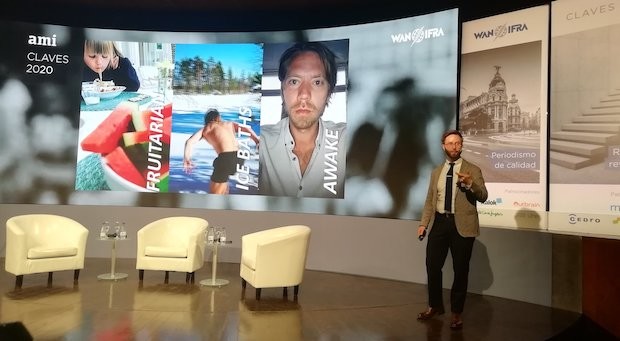 Amid a declining demand for display advertising and a rise in the use of ad blockers, many publishers turned to branded content in the hopes of addressing their digital advertising woes. While it wasn’t quite the be-all-end-all they hoped for, many media groups are finding success with their native advertising studios, and bringing in additional revenue. One of these is Sweden-based Bonnier News Brand Studio.

“Our entire business model is under severe pressure,” said Johan Wilberg, head of analysis at Bonnier News Brand Studio, during the first day of the recent Claves 2020 conference in Madrid. “We must capitalise on our most important asset, which is credibility.”

Bonnier News Brand Studio produces content for a range of Bonnier’s properties: its tabloid daily Expressen, daily quality Dagens Nyheter, financial paper Dagens industri, and magazines. In 2018, it went from 17 to 62 employees, increased its contribution of content to Bonnier News by 70 percent, and won the Native Advertising Studio of the Year award from the Native Advertising Institute. What’s more, native articles perform as well as editorial articles in terms of engagement, Wilberg said, which is measured as active read time.

How to produce a native ad for different publications

He talked about the “cookbook” the studio uses to help show advertisers what works and doesn’t work for branded content, depending on what kind of product they want to advertise and in which publication / platform they want to be featured.

Developed with input from the editorial department, the studio defined six features that factor into the production of a native article and influence its success: “focus”, “angle”, “video”, “article image”, “narrator”, and “special effects”.

The focus can either be on the product or on context. In practice, this means that for a car commercial, for example, one can either write about the product, i.e. the car itself, or opt for context and write about going on a car holiday with family.

With regards to the angle, it’s a choice between an informative and an emotional approach. Wilberg shared an example from postal service PostNord, one of the studio’s first native advertising partners. The company had to change tack strategy-wise after late deliveries and some unfortunate viral videos started to damage the company’s reputation, causing it to move from an informative to an emotional approach. As part of this strategic revamp, Bonnier News Brand Studio produced some 125 unique articles, and around 50 videos, bagging several national awards for the content along the way.

The other decisions that need to be made about the native ad are whether to produce a video or not; what kind of article image to use (i.e. a stock photo, an original image, the advertiser’s own photos); whether to write the article in the style of a newspaper or go for a narrator (the advertiser, an external expert, someone telling the story on the company’s behalf); and whether any kind of “special effects” should be included, such as a quiz, a factbox or a listicle.

The above image illustrates how a native ad about cars is tweaked according to different Bonnier brands. For example, at tabloid Expressen, emotional arguments are preferred whereas an informational angle is recommended for newspapers like Dagens Nyheter and Dagens industri. A neutral narrator works best across all sites, but quotes from experts or advertisers can be added in.

While the five areas can be used individually (for example, featuring a video in a category like health might be the best approach), the Bonnier News Brand Studio believes that the choices made in each area affect one another. This is why they look at the entire chain to determine what works best from site to site and across different industries.