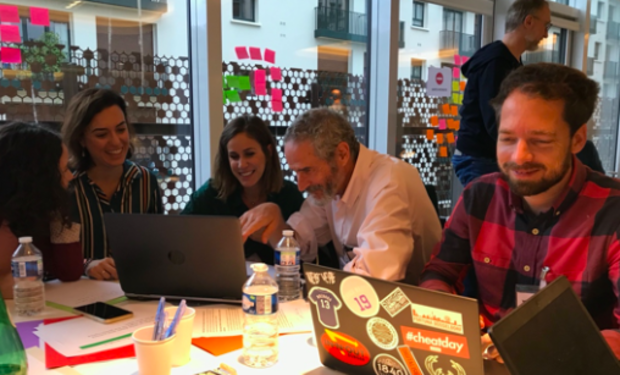 In all there were about 45 participants from 15 European local publishers gathered for the three-day workshop. Each with a different idea about what they would gain by participating in this new WAN-IFRA programme, which is being supported by the Google News Initiative.

It was the first opportunity for them to meet in person and with the architect of Table Stakes, Doug Smith, and the European programme coaches, Alexandra Borchardt, Nick Tjaardstra and Stephane Mayoux.

It’s always fun when colleagues from news media companies meet. Even if they are from different countries and speak different languages, and are a bit tired from their journey, they immediately come together around cups of coffee or tea. This first meeting was no exception, and the chemistry felt good even before the workshop started, which is important because collaboration among the various companies will be key to the success of their projects.

Each publisher’s team arrived having prepared the outlines of the Table Stakes challenge that they were planning to work on during the next few months.

Participants had to choose a project (“a challenge” in TSE language) that was crucial for the success of their company. While the approaches varied, most concerns were around the development of their brands and how to translate this into revenue growth (e.g. better identifying their audiences, creating new products, developing digital subscriptions and so on).

Add performance to your challenge

Tables Stakes is a method associated with tools, and principles but it is also a semantic exercise that underlines how much a shared language contributes to the success of a challenge. In Table Stakes vocabulary, a challenge makes no sense if it is not backed by the notion of performance.

“A common pitfall when organisations start a large strategic project is that during their journey they are so absorbed in building that project that they lose focus on the goal, and they fail,” – Doug Smith, Architect of Table Stakes Europe

“TSE’s core principle is that the primary objective of change is to achieve a performance,” Smith adds. “It breaks down complex challenges into achievable chunks, delivering results that give energy, credibility and momentum within the company. It’s about design/do: trying new skills and concepts in a small-scale way; test and learn what works, what doesn’t and why? And loop to the next step that will take you closer to your final goal.”

Participants must precisely define their “performance challenge” and each word will be carefully chosen to inspire the teams. It will also reflect the “big picture”: what will be accomplished and the expected impact on the transformations underway in the company.

Smith spent some time talking about success measurement and the tools used in the method. The sustainability of the challenge is based on being realistic. Defining the criteria for success is a way of committing to realistic objectives: You are building something ambitious but achievable.

An important part of this performance challenge is therefore to define how success will be measured.

In Table Stakes parlance, what matters are the SMART (Specific, Measurable, Aggressive yet achievable; Relevant and Time-bound) outcome goals. And that you are using a Resources, Activities, Outputs, Outcomes, Impact matrix (the impossible RAOOI acronym).

“In the news industries, success is too often defined by activities (e.g. training, meetings, analysis, reports),” Smith says. “Sometimes, teams get better and talk about outputs produced: e.g. amount of new content produced or number of partnerships…. Far too rarely success is defined by outcomes that matter and the impact on the enterprise.”

“You have to measure output, of course, as it’s showing that something is happening as a result of your activities. But where you really learn is by fixing the outcomes that matter: those that resulted in more digital subscriptions, increases in revenue, new products that generate audiences and revenue, better conversion rates, more time on site and so forth,” – Doug Smith

The Impact indicator is also essential because it is what chains the whole process to effects at the level of the enterprise and to your core mission as a local news brand.

What is your ‘vision’?

By the end of the first day, participants were intellectually onboard with the TSE mindset but still not quite sure where they were going.

“It was not what we expected but in a positive way. I thought it would mostly be about sharing information and our challenges between the different publishers. But the amount of theory and method brought by Doug was really valuable for us,” – Table Stakes Europe participant.

“My challenge was too much in front of my eyes, I have to change on Day Two and focus more on the method,” said another.

During the second day, ideas started to flow about how participants could reframe their challenges using the learnings. In some cases, strategies they had spent time trying to formulate in the past began to take shape.

The group effect played well, the wording of a challenge from one sparked an idea in another: “We need to add inspiration to our project,” said a participant whose challenge was formulated using mostly technical terms. Smith picks up on this passing remark and says: “the more inspiring you are, the more it increases the odds that your colleagues will take the risk. Talk to a number of people and ask them what might make that exciting to them.”

On the second day, the teams were juggling with the notions of performance challenge and SMART outcome-based goals. They had started assessing their gaps.

Using the seven Table Stakes (the essential skills to have) framework, teams registered where they stood in key areas and where their “deficiency” gaps (what to improve) were as well as “aspirational” gaps (what to add) in order to achieve their challenges.

In another exercise they also rated what they were pretty sure would be their strengths. The degree of confidence in each of these was ranked. This exercise is bound to evolve as teams dive deeper in their projects; something Smith has often experienced across the different programmes.

At the start of the third day, everybody was working on overdrive with the number of tools, concepts, and cases they were processing.

“We’ve been hit by a lot of information” said one participant. But they also had a better idea of what was needed to refine their initial performance challenges. The message on the two first parts (what will be done? How will we know it’s a success?) of the 3-part challenge was pretty much assimilated.

Day Three was devoted to “How we will do it?”

Smith used the “snowman concept” to illustrate what was expected here: The head of the snowman represents the vision, which has to describe in a memorable way what is sought and why.

And the bottom part represents the tactics, (operations, and the details that enable the key things to be done: skills, role, workflow, technology…).

The snowman serves as the backbone for how the performance challenge (the vision) can translate into strategies (the key elements to achieve) and split into detailed tactics. Each step being documented with SMART outcomes goals.

For many companies, the “how to” is the tricky part.

“It’s easy to confuse tactics and strategy,” said one participant.

“I find it difficult to take the next step and explain the project to my team… we don’t know how we are going to do that” added another.

Smith was reassuring: “Remember the design/do principle: one loop after the other going up to an S curve. Start small; don’t try to change everything at once. Start with a few people. Who do you start with? Yourself, the people you trust, people you think it’s easy to start with…. Start with the readiness.”

For many of the participants, the chief concern was that projects are done by people and the challenges will need the active support of colleagues beyond the teams present at the meeting. Smith adapted an equation from Eric Abramson’s playbook for that:

As he points out, if any of the D,V, P fail, then the entire project does too. But to win people to a project, it’s the D that is essential to identify: “Dissatisfaction doesn’t need to be negative or deficiency gaps. It can be about an aspiration that has not been realised. You can think of it as a person’s motivations and interests.”

“There are many reasons for dissatisfaction/motivation,” Smith adds, “Money, lack of skills, where are we going, lack of transparency, or excess workload. Some people might want new challenges, are fed up living with negative numbers all the time. They want to make their future sustainable, or feel a lack of recognition and of acknowledging complaints, or there are too many bosses … It’s key to identify them and especially among the persons that will be needed on the project. Who will be favorable to a change, who can be convinced and who could be a distraction to the project? What are the assumptions versus knowledge in this area?”

Sustainable success demands a good understanding of to whom this success matters and why. You need a good narrative to generate momentum and support from the essential stakeholders.

Having guided about a hundred local publishers in his program since 2015, Smith knew what the questions would be even before people started to ask them.

“You can tell his experience with other publishers. For me it’s very visual. We relate to the examples taken from past Table Stakes participants, and we feel it’s accessible,” – Table Stakes Europe participant.

At the next meeting, in December, Smith will be able to relax a little as the participants will do the heavy lifting.

Objectives for the next meeting

Armed with their new concepts and assisted by their coaches, the 15 teams will present a version 2.0 of their challenges, taking into account the Table Stakes criteria: including identified Table Stakes gaps as well as other gaps.

They will have their description of to whom success matters and why with specified SMART outcome-based goals describing success. They will have a narrative to communicate to the stakeholders and a clear vision of where they stand.

Participants will also have identified those colleagues who they can easily win to their cause while identifying those “dissatisfactions” that could be transformed into future support. Most exciting of all they will have already taken the first steps and who knows – maybe we will learn of early wins.

See our other articles about Table Stakes Europe:

Stéphane Mayoux: ‘Local news is often what brings communities together’