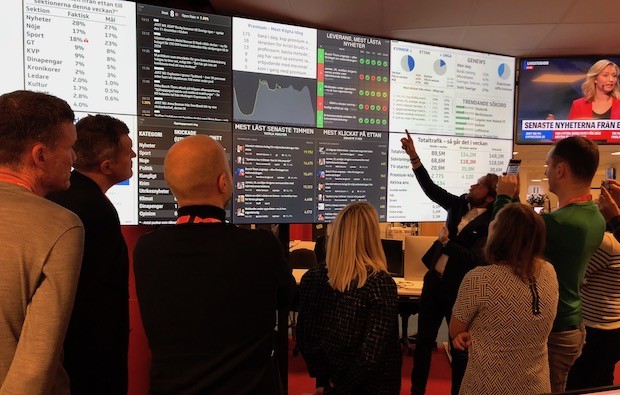 Young audiences are a top priority

Publishers across the world are debating how to better engage younger audiences, but no one seems to be giving the issue quite as much thought as organisations in Scandinavia. At Norwegian tabloid newspaper VG, owned by Schibsted, understanding younger generations and learning how best to communicate with them is a top priority. So much so that it recently launched a dedicated department, dubbed “Z”, with the goal of making journalistic products for younger audiences, and gathering insights into their needs and expectations.

VG has long been aware of the importance of attracting younger generations, and the role they play in its journey towards digital sustainability. In early 2017, it became the first Nordic news brand to join Snapchat Discover, and currently reaches some 300,000 Norwegians under the age of 30 via the platform. While the Snapchat Discover channel is only generating a little revenue, it has served as an important marketing opportunity, as well as a space for experimentation, with learnings feeding into VG’s own products, such as an image- and video-driven app named “Peil” for people under 25.

This mobile-first and visual approach was also reflected in the most-read story VG has ever produced: The Tinder Swindler, an original investigation into an Israeli citizen who conned several women out of thousands of euros, using the dating app Tinder as a means to target his victims. The complex investigation, which took several months to complete and was published in February 2019, combined videos, images, WhatsApp messages, small amounts of text, and behind-the-scenes footage, and was presented in a format similar to an Instagram story. The combination of multimedia elements, a mobile-first approach, the investigative angle, and a topic that resonates with younger audiences proved hugely successful, both within Norway and abroad.

Then there is VGTV, which has dedicated programmes and content focused more on pure entertainment value as opposed to news to connect with younger audiences. Naturally, this raises the question of what news and brand value this type of content actually has. For VG, it’s more, “think very wide, top-of-the-funnel brand awareness.”

This message may seem like a no-brainer, but it’s one that came up time and time again throughout the different Study Tour visits: If you want readers to pay for your content, you need to offer them something they can’t necessarily get elsewhere. Swedish tabloid newspaper Expressen, part of Bonnier, introduced premium content about a year ago, and is now putting 3-4 percent of articles behind the paywall. Since the launch of its premium offer, it has garnered some 60,000 subscribers. Quality stories that, it says, nobody else offers work particularly well in attracting readers, with previous examples focusing on investigating the richest part of Sweden, mental health among the country’s Sami population or the lives of Afghan women who had experienced physical abuse. Moving forward, the editorial team tasked solely with producing premium content, as well as other teams who contribute to it, will increasingly focus on strong personal stories and investigative content.

It’s a similar story at Dagens Nyheter, the quality daily newspaper in Sweden owned by the same group. The most successful drivers for conversion are scoops and investigative stories, followed by content in the long-form or visual journalism category. In-depth guides and lifestyle content focusing on topics such as work, family, relationships, and health also work well in terms of reading time and conversions.

The fourth essential pillar in Dagens Nyheter’s editorial strategy is breaking news, which doesn’t convert well but is extremely important to avoid churn. Martin Jönsson, head of editorial development, pointed out that no one would keep the paper as their main news provider if it doesn’t stay on top of breaking news events. In line with its focus on engagement and reading time, Dagens Nyheter has reduced the amount of content it produces by 30 percent over the past two years, and either completely scraps articles that don’t tend to get read or works towards improving them.

While efforts to break down silos and improve cross-departmental and interdisciplinary collaboration are nothing new for many publishers, it seems that the editorial and commercial side are now moving even closer together. At Schibsted’s Aftenposten, one of Norway’s largest newspapers, content acts as the primary acquisition driver in digital channels, with about 70 percent of web sales coming from the paywall.

Against this backdrop, understanding what kind of content converts, and how long people stay on different types of content has become hugely important, and the commercial and editorial entities collaborate closely on a day-to-day basis, on medium-term planning, and on strategy.

On a day-to-day basis, for example, they discuss what kind of articles should be sponsored on social media or how certain pieces of content should be distributed to subscribers and non-subscribers. They also meet every three months to discuss the editorial team’s upcoming plans, and to potentially move around publication dates to coincide with commercial campaigns. Strategic collaboration revolves around discussing opportunities to monetise content, as well as new types of journalism that could reach new readers. For instance, the commercial team identified lucrative audiences as part of a recent project, and is now working closely with a journalist hired specifically to focus on that area.

At Dagens Nyheter, newsroom staff is also participating in tasks that, traditionally, used to be the sole responsibility of teams on the commercial side of the organisation. Rather than purely relying on the marketing department, journalists are now actively involved in reducing churn, by, for example, working to increase newsletter readership or assisting in the initial onboarding process, which includes welcome newsletters, content recommendation, or highlighting top writers subscribers should follow.

More information on this year’s Scandinavian Study Tour can be found here.