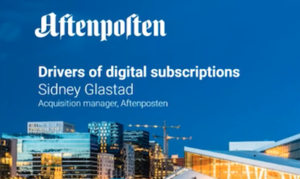 Glastad joined Schibsted in 2017 and is Acquisition Manager at Aftenposten, the leading quality daily newspaper in Norway, where he is in charge of customer acquisition strategies. To do this, he works closely with the editorial team.

In a WAN-IFRA Webinar last week, Glastad told approximately 100 participants about Aftenposten’s digital subscription strategy, what’s working for them and offered a look at what they’ll be focusing on this year.

Sidney GlastadAftenposten is the largest subscription newspaper in the country with approximately 238,000 subscribers, with 119,000 of those being purely digital.

The paper has a staff size of about 150 people, most of whom are based in Oslo, with correspondents in Brussels, the Middle East, Russia and the United States.

Paywalls first began appearing in Norway, historically a subscription-friendly and news-consuming country, in 2011. By 2013, several newspapers had metered paywalls, although “many of them were quite porous and you could often read 10 articles a week,” he said.

Today, however, those figures have tightened considerably and Glastad said 70 percent of readers in Norway hit one or more paywalls a week.

“There’s not a lot of people left who don’t understand that paying for news is important,” – Sidney Glastad

Going all in on user-revenue

In 2015, Aftenposten made a strategic decision to go all-in on user-payment and user-revenue, Glastad said.

“A couple of months later, we launched our hybrid model,” he added. “We had a meter model, where you could read eight articles per week. It was quite porous at the start. We also had some content areas that were premium.”

One of the other things Aftenposten did was to have key articles on Facebook as ads. “That delivered our content to hundreds of thousands of people – content that we knew converted users on our site, but our site was just too small to reach out to the number of people that we needed to convert,” Glastad said.

A couple of months later, they tightened up the meter, changing it from eight articles a week to six, “which also gave tremendous results,” Glastad said. “After a while, we also started to increase the share of premium articles on our front page because we saw that the more of that content that was locked, the more sales we had.”

Fast forwarding to mid-2018, Aftenposten moved into another model. “We are primarily a freemium site, and our meter is smaller,” Glastad said.

“Our meter was basically our primary sales force, but as we moved up the curve, we saw that sales from the meter were becoming less and less relevant and sales from premium content were becoming more and more important,” – Sidney Glastad

At the same time, Norwegians have become more willing to pay for online news, and this is also helping. And in the case of Aftenposten, it is not a cheap subscription. Glastad said the monthly digital subscription is about 25 euros, but that, of course, they do a lot of A/B testing and cheaper campaigns to convert.

“We’ve seen that the distribution of income at Aftenposten has grown radically,” Glastad said. “Back in 2009, almost 60 percent of our revenues came from ad revenues, but now, almost 80 percent of our revenue comes from circulation and user subscriptions. That’s a tremendous change, and it’s been spured on by our change in strategy.”

He added that Aftenposten’s paywall is where they get about 70 percent of our web sales, “and that makes it really important for us to understand what kind of content converts and how long people stay on different types of content. That basically means that the way we work today has evolved around that content,” he said.

Extensive use of data, analytical tools

They are also constantly looking at what kind of changes they can make to the content to make it convert even better.

Likewise, they have regular meetings to look at what is going to be published in the next couple of weeks that they can tweak  in terms of getting the most number of conversions on it, he said.

For example, they used to publish series of articles every Monday for perhaps three or so weeks. Now, however, he said Aftenposten has started publishing all the articles in a series, so that people who are really interested in a topic are able to binge on the content.

“But we still also publish them every Monday over three consecutive weeks, so that we got both the people who are interested in the content right now and want to binge on it, and also the people who just want to discover the content on our front every week,” he said.

Furthermore, they use medium term planning to look at how we’re going to work over the next couple of months.

“We have meetings every three months where we look at the different teams on the editorial staff and see what their publishing plans are and what kind of articles they are working on,” – Sidney Glastad

“We generally discuss how we can move those around and if there’s a huge article, maybe we can split it up into a series, if there’s a podcast attached to it and that kind of stuff. We try to make a plan across our divisions so that we have the optimal way to publish it for sales and engagement.”

Aftenposten also uses strategic collaboration to plan for the next six months or the next year, or even the year after that, Glastad said. “That goes more into what kinds of areas we could cover that might be profitable. Do we see other kinds of content that maybe we should cover more closely? What is the next type of content that we could put behind the paywall?”

“We have a model right now where 30 percent of our content is premium and the rest is metered, so, what’s the next piece of content that we can make to make that percentage go up to 35 percent?” – Sidney Glastad

Among the tools they use is one they call Insight. “It’s basically our real-time conversion tool,” Glastad says. “This is something that the entire organisation looks at, and it’s one of the key factors for our success the past couple of years, and it was developed in-house here at Aftenposten.”

He said Insight focuses on several key metrics, including:

Another tool spotlights engagement, and measures key areas across all subscribers on Aftenposten, including volume (how many articles a user have read during the past 4 weeks) and frequency.

Another tool looks at popular articles, how many articles were finished and how many sales they got per day.

“Each department has its own dashboard where they can follow the metrics that are important to them, and they have been involved in creating the dashboards,” –Sidney Glastad

Looking ahead to this year, Glastad said Aftenposten will be focusing on two main areas: Engagement and Acquisition. For engagement, they will be looking at ways to leverage all signals that can help them to decrease the likelihood of subscribers churning. They are also planning to increase “snackable” content, such as quizzes, he said.

In terms of acquisition, among the areas they will be experimenting with are putting podcast content behind their paywall and creating partnerships with non-competiting brands as a way of prospecting for new audiences. They are also looking at new areas of content they could focus on, such as around parenting.