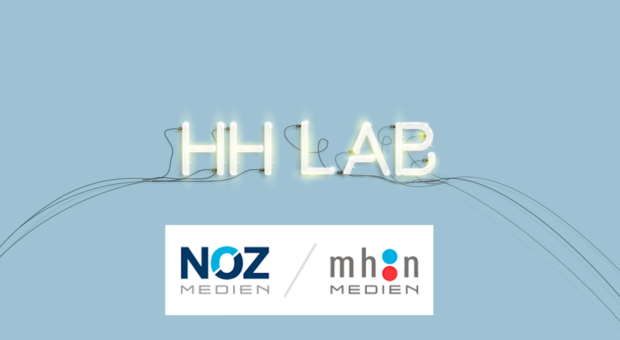 For over a hundred years, the newspaper business was mostly a stable industry. The business model was based on readers and advertisers, and few publishers needed to think about creating commercial offerings outside these two revenue sources.

But now, the news media industry has an urgent need to rethink its business approach. As digital innovations multiply and the audience’s media consumption habits change, news publishers are confronted with a vital need to create new products that suit the radically changed market.

This, in a nutshell, is the vision that drives the work of HHlab, the research and development unit of NOZ Medien and mh:n Medien.

The two north German regional publishers joined forces in 2016, when the former acquired the latter. Together, the companies decided to create a joint media innovation unit tasked with finding innovative commercial opportunities. Thus HHlab was born in January 2018 in Hamburg. (The “HH” in HHlab stands for “Hansestadt Hamburg”, or “Hanseatic City of Hamburg”, an abbreviation used in car registration plates in Hamburg.)

Products based on digitalisation

The lab identified one such opportunity when it realised that small and medium-sized companies are often struggling to keep up with new digital tools.

Digitalisation has transformed how big companies operate, but SMEs tend to lag behind with their digital transformation. Moreover, while large businesses have access to useful networks, smaller firms based outside the metropolitan areas often lack such connections.

This realisation lead HHlab to develop NETZfeld – a B2B vertical that provides both information and networking opportunities about digital transformation for small and midsize companies. Based on a subscription model, NETZfeld users get access to related news and case studies, as well as networking opportunities where they can learn from other companies. (NETZfeld will be discussed more in detail below.)

Both product ideas have now gone through the lab’s development process, and the company’s management is now assessing their implementation.

It may seem peculiar that a regional newspaper publisher would come up with products such as a B2B vertical and an advertising agency. However, the process that lead to the development of NETZfeld is a good illustration of how the lab approaches innovation projects. Joachim Dreykluft, HHlab’s director, says that it started with a simple realisation.

“We noticed that although there are a lot of events about digital transformation in big cities, firms based in smaller towns rarely participate in them. And even if they do, they can’t always relate to conference speakers who are mostly from big companies.”

NETZfeld: Digital future of rural lifeThis led HHlab to develop a prototype event aimed at this specific audience. After a couple of successful test conferences, the lab realised it had to account for competition: chambers of commerce and other non-commercial actors hold similar events, and mostly for free.

HHlab expanded therefore its product concept with an information component. This was possible thanks to the existing infrastructure of the local newsrooms that the two companies have in north Germany.

“We approached our editors-in-chief and explained that a story about digital transformation in one location could be relevant elsewhere,” Dreykluft says. This allowed the lab to add a daily feed of information into the product, which is complimented by quarterly reports and case studies.

“It took almost a year for us to feel that we had the right mix of information and networking at the right price point,” Dreykluft says. “The end result is basically a club. When you join NETZfeld, you buy a club membership.”

HHlab has a staff of 12, half of whom are journalists. “This split is perfect,” Dreykluft says. “We need the journalists’ expertise, but we also need people with a customer’s perspective.”

As mentioned, the lab usually starts its innovation projects when someone in the team identifies a need that the market doesn’t cater for, and then sketches a product concept based on this need. If the concept is convincing enough, the project is put on a “fast track”, which gives the project team four weeks to develop the concept further.

At this point the teams tend to consist of three people, usually a project coordinator, a topic expert and a developer. There are typically 5 or 6 active product development projects in parallel.

Once finished, the product team presents the prototype to the lab, and the whole team needs to give their buy-in in order for the concept to be developed into a full-fledged product.

Not all of the explored ideas are successful, but Dreykluft emphasises that this is an important part of the process. For instance, in 2017 the lab ran a project on “ambient news”, exploring different ways to use “Internet of Things” devices for journalistic content.

“The conclusion was that there are indeed ways of bringing news and journalism to the Internet of Things,” Dreykluft says. “But there is no Internet of Things! There is no speaker on my fridge, no screen on my oven, and my bathroom mirror is just a normal mirror.”

The team thus concluded that the limited number of smart home appliances in the market, such as smart light bulbs and speakers, don’t offer enough opportunities for an IoT news product. But even if the project didn’t result in a marketable product, Dreykluft says such initiatives still produce learnings that are important in themselves.

Focus on agility and knowledge transmission

HHlab indeed values internal learning highly, and everyone in the team is expected to record and transmit their learnings. The lab uses external resources rarely for the same reason, preferring to build up its internal knowledge and competences. Team members also participate in courses on design thinking, lean startup, and innovation in the media industry at institutions such as Hyper Island and Hasso Plattner Institute.

“Everybody is obliged to write down everything he or she does and learns. We want to fail and learn ourselves,” Dreykluft says. “If you want to learn and get better, you need two things: you need to talk within the team, and you need documentation. We document everything.”

HHLab team developing a persona for one of its target groups.

As for the innovation methodologies, the lab mainly uses the design thinking process, sometimes also employing the lean start-up methodology. The important thing, whichever method is used, is agility and the ability to backtrack.

“You constantly need to ask yourself if it’s necessary to take a step back,” Dreykluft says, adding that the team uses well-defined KPIs and data analysis to determine whether a given project is on the right track.

“It really hurts when you realise that you have to go back and start again. But feeling the pain is a very good thing for learning. And you can’t feel that pain from a book or a course.”

HHlab is part of NOZ digital, a subsidiary of NOZ Medien that drives digital transformation of NOZ Medien and mh:n Medien. But when it comes to the relationship with the affiliated companies, Dreykluft admits that knowledge of the lab’s work doesn’t always reach other parts of the organisation.

In fact, he regularly meets people in the wider organisation who do not understand what the lab does. The innovation team is trying to address this through communication.

The lab also aims to identify people within the organisation who feel that the company should be moving faster with digital innovations, bringing them together for a six-week program. This, the lab hopes, will help the participants spread a more forward-looking mindset within the company.

Although connecting with the broader media innovation ecosystem is crucial, Dreykluft sees an unfortunate shortcoming with the related conferences: “The approach at these events often is, everybody should be able to join and understand the discussions. Which means that the discussions are mostly on a basic level.”

This might work in terms for getting people engaged, but Dreykluft says that people working on media innovation full time would benefit from a more advanced approach. “I’d want to meet people who already know what agility is, or what prototyping is, or how design thinking and lean start-up methodologies differ. But the opportunities for this are rare.”

Beyond the media industry, HHlab has an ongoing research programme with the University of Hamburg. But when it comes to working with start-ups, Dreykluft says he is less optimistic about these collaborations than he used to be, even if Hamburg has a strong media start-up scene.

“I now feel that there are not so many connection points with start-ups that I thought two or three years ago, because their needs are very different from ours,” he says. “Their basic need is to convince investors, so that’s where they focus their energy.”

Also different methods separate the two fields, as Dreykluft says that start-ups are mostly based on developing an idea, while HHlab’s approach is more systematic: “In my experience, when it comes to successful product development, one of the least important things is the idea.”

Although the news business model served the newspaper industry well for a long time, relying on the same model for such a long time has made publishers less effective at detecting news business opportunities and creating new products, Dreykluft says. This is apparent in the way many publishers react to HHlab’s work.

“What I often hear is, ‘what you do is great but it’s very expensive, and we could never afford it.’ I always try to explain that actually, what we are doing is the least expensive approach you can have for successful product development.”

He says that the media industry tends to create new products by taking an idea, creating a product based on it, putting it to the market – and then letting the market decide whether the product is successful or not.

“That’s the most expensive approach to product development there is! By contrast, our research and development methods aim to make success as likely as possible,” Dreykluft says. “So in the end, we do not produce costs, we reduce them.”