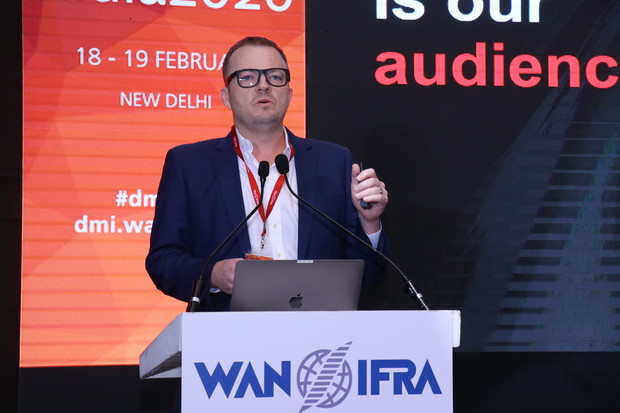 By effectively using audience data, the digital medium allows a publisher to accurately access the consumer’s wants, needs, consumption patterns, align them with brand objectives and strategise accordingly. Embracing analytics and insights to improve newsroom efficiency, however, does not translate to clickbait.

“Journalism is not about what you sell, but how you sell it,” he said. “At CNN Digital, we are constantly optimising the content tone, angle, packaging, and distribution based on what works best.”

“The proof of success is not merely knowing what works, but why and when it works; one can’t rely on instinct alone to break free from the status quo and drive true organic transformational change from within,” McKeehan said.

CNN has access to more than 484 million households and hotels globally. The brand’s combined properties see more than 299 million monthly unique visitors around the world on average, as of the final quarter of 2019.

The company also has more than 166 million social media followers, and gets half a billion video hits each month.

How did they achieve these milestones?

Journalists at CNN treat every market differently, through intense analytical rigour. Knowing what content people consume, as well as when, how and where they consume it, influences every step in the editorial team’s content creation, editing, publishing and distribution process.

Nearly two in five adults globally engage with CNN through either the digital medium or the television on a regular basis. Across the company’s key markets, this statistic translates to 640 million adults – a pool of potential relationships and data points that proves to be a learning source.

“Competition in the media space has never been greater. Audiences today have higher expectations and lower attention spans. They are our asset,” – Brett McKeehan, CNN Digital Worldwide

“We need to find a middle ground to meet their, and the brand’s, expectations of content consumption and creation, without compromising on the quality,” he added.

People are now more connected than ever, with plenty choices and a smorgasbord of information.

On an average, globally, the CNN audience consumes more than 10 hours of media daily, across platforms, of which three hours is on the smartphone.

There is an evident, drastic shift in people from non-English speaking countries spending increasing time online, forcing publishers to write headlines and programme homepages that keep small screens in mind.

Three in four English language news readers in India now consume content on their smartphones, the primary platform for news consumption in the country.

“Stats show that Indian audiences like consuming video content on phones,” McKeehan said. “Twenty-seven of the top 39 most popular pieces of CNN content in 2019 were videos.”

“CNN has a lot of video content, and India has a lot of people,” he continued, “We, thus, optimise digital video and newsroom resources to maximise Indian eyeballs on the smartphone during prime India hours – by displaying stories we know will play well with the Indian readers ranked higher on a mobile homepage than the desktop.”

The strategy is to serve every market differently. CNN numbers show that Australians frequenting the website crave news on US politics over local news.

“It all boils down to striking a balance between statistical proof and instinct. Our play in Australia is lightly programmatic, in that we make sure there are plenty of American news items on the homepage and social media accounts during key Australian hours,” McKeehan said.

Singapore, another key market for CNN, is extremely well served by local media. The company identified the audience’s key interest lay in news about wider Asia, particularly north Korea and Malaysia, and health, military and travel.

In Japan, people engage with the website on their desktops mostly between 10am and 2pm. The traffic peaks at about noon. Hours between 7am-8am and 9pm-10pm (office and commute hours) are key mobile traffic drivers.

Three in five international readers, i.e. an overwhelming 62 percent, (barring the US) engage with CNN using Android devices, compared to 31 percent in the USA.

“All these regions employ different strategies. While we cover consumer food news very aggressively, we acknowledge the fact that we cannot do restaurant reviews, not being a local website,” said McKeehan.

Eighty percent of CNN’s content opportunities are likely to get significant play in both the US and international markets.

How to reach people who aren’t reading CNN?

“Our audience knows us for unbiased, objective and impartial reporting. This translates to an unwavering commitment to accuracy, fact-checking, reviewing data and performance,” McKeehan said.

The brand soon realised that coupled with its unprecedented domain authority, it could attract new audiences and offer more to existing readers through a more diverse content ecosystem.

Business, tech, style, sport, health and travel are verticals that the audience might not automatically associate with the company.

“Our stats, however, showed a strong appetite for these subject interests, and so we actively pursued these areas,” McKeehan said.

These verticals proved to be not only extremely safe for potential advertisers who wanted to be associated with the trust and value of the CNN brand, but also became important areas for offering a 360-degree content mix.

CNN Digital’s @brettmck1 discusses the importance of audience insights in driving change in the newsroom at @DigitalMediaIn in Delhi. #DMI2020 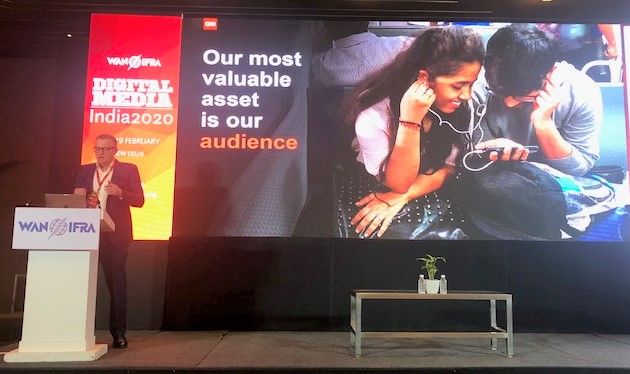 “We looked at the numbers, assessed audience appetites, identified the opportunities and built our brand. We have managed to create multiple entry points for audiences into the wider CNN digital ecosystem. This, in turn, has created several revenue opportunities and ideas around further streams we can focus on,” said McKeehan.

Print media is bound by the distribution model; Digital is global. Having steadily expanded over the years, the CNN universe now comprises the website, app and the direct streaming TV service as its top platforms. Apart from those, the brand uses eight video platforms, 14 social and messaging platforms, and 15 emerging platforms.

Audience habits and platforms are constantly evolving and need to fit into a publisher’s wider distribution strategy.

CNN has a central team at Hong Kong and bureaus across Asia, including in New Delhi. What sets the company apart from its contemporaries in making regional news global?

“Our unique enterprise journalism is what makes us stand out. It takes more resources and is harder but find a way to make local content globally appealing,” McKeehan said.

“A beautiful thing about the digital media is that imagination is as limitless as the audience. We understood that if we analysed data, combined it with the right sort of social media activity, our impact journalism could be extremely powerful and transformative.” – Brett McKeehan

The opportunity for audience engagement in India is unmatched with a 1.3 billion population. More than 500 million people access the internet, and another 800 million people will be connected in the next decade.

“Audience equals opportunity. With the right digital tools and by treating them as people with real interests, one can target readers effectively to the benefit of one’s business,” McKeehan said.