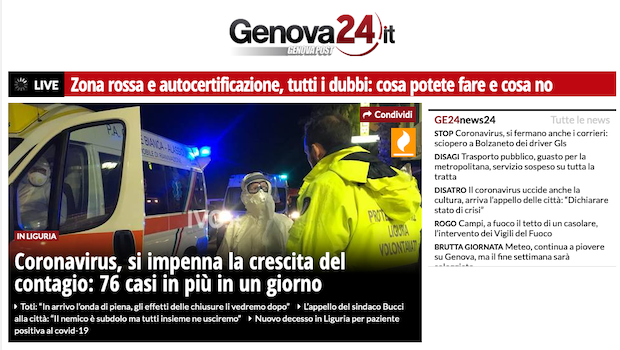 As Italy finds itself in lockdown and people are encouraged to stay at home as much as possible, news organisations have been forced to prepare for a potential full work-from-home scenario, and develop measures to ensure the flow of news isn’t interrupted.

In this regard, Liguria-based company Edinet, which publishes Il Vostro Giornale and Genova24, seems to be one step ahead of competitors, as its reporters have been working remotely long before the outbreak.

Edinet is also taking part in WAN-IFRA’s Table Stakes Europe programme for local news publishers, which is being supported by the Google News Initiative.

On the frontlines providing in-depth coverage

Since mid-February, roughly a dozen journalists have been on the frontlines of the novel coronavirus crisis in the region, providing continuous in-depth coverage.

“The biggest advantage [of working remotely] is that you’re always close to the ‘crime scene’,” says Matteo Rainisio, Edinet’s CEO and Founder, adding that one reporter was first to arrive when guests at a hotel in Alassio were put under quarantine, and spent a week at the location documenting what was happening for 14 hours a day.

Matteo Rainisio at WAN-IFRA’s Table Stakes Europe programme in LondonWhen covering a highly infectious disease, the lack of a physical newsroom is, of course, another benefit, reducing the risk of contagion among colleagues.

Rainisio hasn’t issued any particular guidelines to staff, aside from following the WHO’s basic protective measures against the disease, such as frequent handwashing.

Rainisio says some of the first measures to tackle the spread of Covid-19 in Edinet’s coverage areas were implemented in late February when all schools in Savona were closed.

A few days later, events were cancelled, and cinemas and clubs were shut down. Amid fears of possible isolation, citizens emptied supermarket shelves and flooded pharmacies stocking up on essentials.

In terms of coverage, uplifting and inspiring stories have been performing particularly well, says Rainisio, which perhaps doesn’t come as a surprise at a time somewhat marred by fear and uncertainty.

One article published in Il Vostro Giornale told the story of a young Albanian waiter at a hotel under quarantine who started taking care of elderly guests confined to the premises.

But readers have also been craving hard facts. Journalists have provided live coverage of press conferences held by Liguria’s regional government since 16 February, and conducted multiple interviews with Matteo Bassetti, Head of the Infectious Disease Division of the San Martino hospital in Genoa, a leading medical institution in the area.

A story in which he downplayed the risks of coronavirus was shared more than 320,000 times on Facebook, while a live interview reached some 2.5 million views.

Matteo Bassetti in an interviewIn response to the government extending emergency measures and urging people to stay at home as much as possible, reporters created an interactive map of shops and pharmacies in the region that offer home delivery.

Since starting its Coronavirus coverage, Edinet’s publications have experienced an increase in daily traffic, Rainisio says, and are outperforming legacy media outlets on Facebook.

‘We listened to our readers and decided to slow down’

Despite this uptick, however, he cautions against covering every single development, as it could potentially lead to inducing further panic among the public.

After the first week of coverage of the outbreak, some of Edinet’s readers said they felt overwhelmed by the constant onslaught of information, accusing reporters of exaggerating the situation and causing unnecessary alarm.

“We decided to take a step back,” Rainisio says.

“When you’re there, you want to cover everything, but we also have a social responsibility not to scare people, even if that is not our intention. We listened to our readers and decided to slow down on live videos, articles… just to feel more ‘human’.”