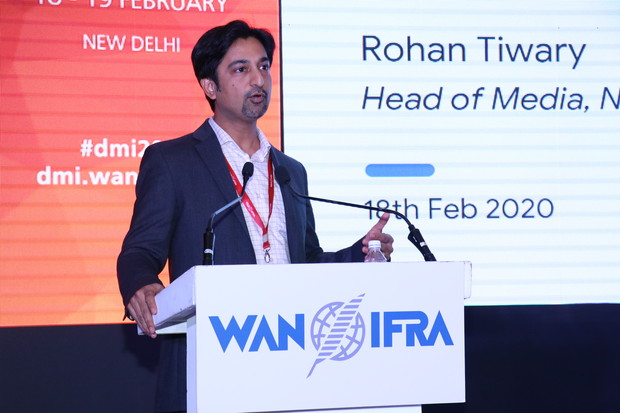 According to Google research, about 92 percent of internet users in India access news at least once daily, which is among the highest rates in the world. This offers industry stakeholders, including Google, a vast market and tremendous opportunities.

“News still has extensive reach, but it’s important to break down what are the authoritative sources that are being sought by users,” said Tiwary. “It’s important to rethink business in those parameters.”

Google has been a frontrunner in this aspect. Close to 24 percent of the company’s investments into the Google News Initiative in the APAC region is in India.

Furthermore, nearly all of this news consumption is being done through mobile phones. A 2019 study by Kantar suggests that 97 percent of consumers seek news through their phones, a clear indication of where publishers should have their focus.

Google has been actively developing services based on this trend, such as its “Accelerated Mobile Pages” or “AMP,” which they launched in India in October 2016.

AMP helps to speed up the rate that articles load on mobile devices, and publishers have been quick to embrace it, Tiwary said. He added that adopters of AMP have seen 6x growth in traffic and 2x growth in CPM.

“We have also recently launched AMP stories, and here the expectation is that this is going to see 3x the CPM for banner ads,” he said.

AMP stories, which launched in August 2019, offers publishers an opportunity to provide users with an immersive experience. AMP stories can offer “a mobile-focused format for delivering news and information as visually rich, tap-through stories,” according to its website.

“I think this would have a profound impact on your (publishers’) business, mostly in terms of the vertical layout that the AMP stories present,” Tiwary said.

In addition, he said that Google has been carrying out pilots of flexible pricing and “Subscribe with Google” in the region.

The Google News Initiative (GNI) launched in March 2018 brought several programmes under one umbrella. The company dedicated $300 million to GNI, and through it, Google has been working with 350 news organisations across 70 countries.

GNI was introduced in India in June 2018 as Google News Initiative Training Network to support journalists in their fight against misinformation. In December 2018, Google selected 10 Indian media companies for funding under the initiative.

“Two years back we started the GNI India training network, which was in partnership with Boomlive, Internews and Dataleads where the intention was to look at how we could train and provide support for the fight against misinformation. As of today, we have trained about 26,000 journalists,” – Rohan Tiwary

“This is an activity that has been going on and there’s a lot of scope out here for us to do,” he continued, adding that India was the first country where Google introduced fact-checking on YouTube.

In January, along with the news literacy organisation Internews, Google announced an investment grand of $1 million to promote news literacy in India, where the focus is on developing programmes that train internet users to spot authentic news from the ocean of online misinformation.

“This is going to be across seven languages aimed at non-metro cities,” Tiwary said.

Aiming to drive revenue to publishers

The ever-changing news consumption patterns have been adding to the amount of complexity in monetisation models, however Tiwary likes to believe his team has been providing value to publishers by building audience and driving traffic to their websites.

“Google has been driving 24 billion views or times that users come every month to authoritative news sites providing the opportunity to build your models on top of this traffic. A lot of partners work on the ‘ad-manager’ platform where there are a lot of options where you could leverage that technology to capitalise on the monetisation aspects,” – Rohan Tiwary

In 2018, Google shared about $14 billion with the publisher ecosystem.

“We have products like ‘Subscribe with Google,’ where we work with 83 partners across 19 countries. You will see a lot of focus and push by Google across India also in this area. This is where we bring in the technology expertise and help that create a smooth funnel where we could hopefully provide insights in helping you drive revenue through advertising and converting users who could be potential subscribers,” Tiwary said.

“The other aspect is around new users. We are trying to make both content and experiences more locally relevant. For the advertisers, this gives an opportunity to reach a new population that is coming online, which could be the Indic population. For the users, this helps them to see ads that are more relevant to them,” Tiwary said.

“These are programmes where Google looks at ideas across both legacy print business and digital natives as to what are some of the innovations we could help you with taking it to the next phase of testing,” Tiwary said.

“A new journalistic tool called Backlight, which is in alpha testing and not yet launched in India, helps journalists make sense of heaps of data. The test we ran in the US was on the Kennedy assassination where 75,000 pieces of documentation were fed into this tool and the results were quite interesting. These are the kind of tools we plan to launch in the market,” – Rohan Tiwary

Tiwary noted that the company has also been leveraging its technological prowess in machine learning, artificial intelligence and automation to develop tools that would help the publishers.

“There is a tool called ‘Flourish,’ which is widely used by journalists in creating maps. This was very useful when we were looking at election coverage or data visualisation,” Tiwary said, pointing out that the tool has been helping many news organisations in India including The Quint, Business Today, Indian Express, Deccan Herald and News18 to add value to their efforts in the newsroom.

Audio has been another focus area of Google. It has been investing GNI funds amounting to $5 million into audio news partnerships. Tiwary notes that the near future will see a lot of development around podcasts and audio partnerships.

Data Studio was introduced by Google for those who wanted to go beyond Google Analytics. Tiwary noted that in India it is being leveraged by media houses like Jagran.

“When you look at things like programmatic advertisements or avenues to increase your advertising or or even subscription, how do we help you create cohorts of what kinds of audiences are you targeting; once you have that kind of audience how do you re-target – these are the kind of things we try to do,” he said.

Apart from Data Studio, Google has also introduced other initiatives, such as the Insights Engine Project and features such as BigQuery.

“We are looking at providing subscription support for publishers. So could we use these tools and data to help news organisations understand their audience and get insights on which users are more amenable to move towards a subscription point of view,” – Rohan Tiwary

“We are very mindful of the privacy part,” he continued, “what we are looking at is if you could use cohorts to understand the areas they would move to.”

“We have experimented with a lot of models – be it ads or subscription,” he added. “We are also looking at a lot of pricing options. By mid-2020 you would see a lot more innovations and products from us on the data front.”