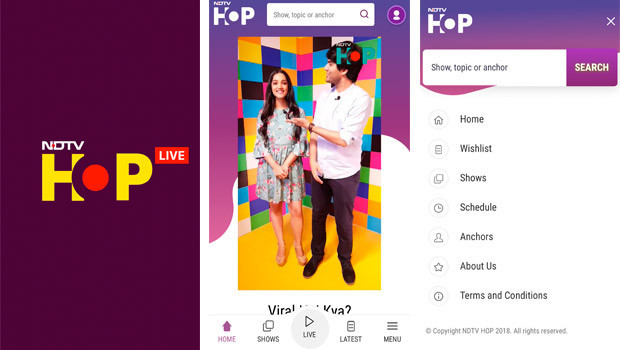 With the help of their in-house expertise in content, design and technology, NDTV HOP Live went from conception to launch in just six months, expedited by the backing of Bharti Airtel – one of India’s biggest telecommunications services companies.

The brand offers a smorgasbord of content genres with an emphasis on eye-catching visuals, graphics and snappy editing styles.

The decision to stick to Hinglish (a mix of Hindi and English) as the primary language of communication was made to captivate a wider audience base and give off a welcoming and casual vibe.

Every piece of content, ideated and executed by a team of millennials, has an appointed time to go live, since the application works 24×7 and demands flawless content streaming even in low internet connectivity areas.

The cycle of drawing up a video plan, executing it, editing it and publishing is fast paced. It begins with an idea discussed editorially, followed by chalking out a concept, a shoot and an edit plan.

“We ensure that none of our team members are overworked. We constantly revisit our workload and try to ensure there are people to chip in whenever possible,” – Vivek Gupta, Managing Editor, NDTV HOP Live

“Yes, it’s a challenge, but the team also gets a free hand to experiment and try new ideas, which keeps them motivated.”

Streamlining content in terms of format and style was initially a challenge. Even though, over the course of one-and-a-half years, the basics of structuring and producing content have been taken care of, every piece of produced content is still quality and fact-checked multiple times before it goes live.

“The most traffic is brought in by anything newsy, be it a hard news story, an explainer, or a comic take on news. This is followed closely by genres such as food, travel, and entertainment,” said Gupta.

Interactivity is a key element of the channel. While viewing the content, users can vote in opinion polls, participate in quizzes, and even buy merchandise online simply by clicking on the in-video popup links. The best use of these interactive features comes into play.

in the show “Deal Le Ke Dekho,” a daily offering about the best online deals. Viewers can simply click on an interactive link, which will redirect them to the deal discount being advertised on the show.

Sending readers away from one’s channel comes across as an unusual decision, in a time where publishers are pooling in resources to direct all traffic to their channels, NDTV HOP Live is directing traffic away.

“We are committed to an overall satisfactory user experience that goes way beyond the minutiae of clocking views. Since its conception, NDTV HOP Live, has believed in experimentation,” – Vivek Gupta

HOP is a hybrid of appointment-viewing and Video on Demand (VoD) formats. VoD is an interactive technology that allows subscribers to view programming in real time or download programs and view them later.

After a piece of content goes live, it is saved as VoD on the app. A user can then choose to view a show or segment at a convenient time or better still, download it on their phone’s memory.

“At HOP, we don’t only care about the mega stars, but also shine a spotlight on the silver screen,” Gupta said.

The show “HOP Corn” is built on the “Netflix and Chill” philosophy. It is dedicated to helping viewers clear the clutter and invest in watching not only the most talked about but also hidden gems in India’s fast-growing original content OTT space.

Since the brand’s USP is tailored content for smartphones, it made sense to stick to a vertical aspect ratio, primarily for two reasons: First, multiple studies have reported that users hold their phones vertically 90 percent of the time for most purposes. Secondly, vertical videos, when shot smartly, offer a more engaging and immersive experience.

Since HOP expected users to consume its content on-the-go, it wanted to ensure that a user could navigate the app and click on videos without having to use their second hand to rotate the phone 90 degrees.

Shooting vertical videos is slightly different from shooting horizontal ones, but not difficult. Since the frame is narrow, if the focus is entirely on the subject and not on capturing too many elements, vertical videos work just fine.

“Editing these videos can be fun as there are many ways to split the videos in different frames and use the 9:16 space creatively to add text and graphics that complement them,”  – Vivek Gupta

As any news publisher knows, producing daily engaging content is no easy task. The HOP team has experienced an organic and steady growth by striking a balance between producing content and engaging viewers.

“There is no secret formula – only persistence and passion,” Gupta said.

One of HOP’s top daily shows, HopStart, shines a spotlight on budding start-ups and established companies, the trials and tribulations they face and advice from industry leaders.

While producing daily content is a challenge, the fashion and technology teams at HOP have found a unique way of engaging viewers by dividing the genre even further.

The show “Tuesday Travels” finds the best fashion hotspots in the country and brings it to the mobile screens. “Follow Me Fridays” offers easy-to-do makeup and dress-up hacks, keeping track of the ever-changing millennial fashion trends.

The technology and gadgets team is responsible for programming that ranges from reviewing the newest gadgets and applications from across the world, to helping the not-so-tech-savvy people with tech advice. At the centre of these two teams are industry veterans Ambika Anand and Rajiv Makhni who engage with viewers directly.

While fashion and tech programming are the new cornerstones of a millennial platform, HOP has also long been associated with providing credible and trustworthy news. HOP furthers the trend of accessible news with live news bulletins through the day.

“The news team routinely manages to blend the complexity of the everyday news cycle with a fresh outlook that makes the content a lot more accessible and interesting to watch,” – Vivek Gupta

During the 2019 general elections, HOP launched a campaign called “Vote is Woke,” an initiative dedicated to first-time voters. The campaign covered the elections from the “millennial lens,” featuring content that ranged from helping voters get their ID cards to explaining the complicated election process of the largest democracy in the world.