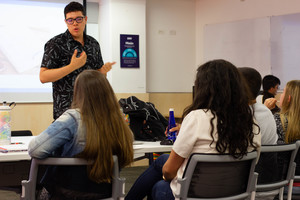 The MediaLab EAFIT is part of the department of communication studies at Universidad EAFIT, located at the university’s campus in Medellín, Colombia. The lab was founded in 2009, with modest resources (second-hand computers and one teacher), to explore digital convergence. This first iteration of the lab investigated virtual worlds (Second Life at the time) and emerging media formats, such as video blogs and live blogging.

“In the beginning it was very informal, and the activities and topics were based on people’s personal interests,” says María Isabel Villa Montoya, Coordinator of the master’s degree in Transmedia Communication at Universidad EAFIT.

In 2012 the lab’s status within the university was formalised, and it was given a dedicated room at the campus. The same year it started its own YouTube channel MediaLab TV, and launched projects exploring media literacy and transmedia storytelling. The year after the EAFIT university launched an MA in transmedia communications, closely linked to the MediaLab.

Currently the lab has two classrooms dedicated to students’ work, with a new research space opening in 2020. A new BA on interactive design, also connected to the lab, will also start this year.

Today the lab organises its work based on four strategic pillars:

The last pillar relates to societal issues that explore topics outside the traditional media sphere: “We don’t think that technology per se is important. Rather, technology exists for people,” Villa Montoya says. “So we work with real people on real problems to develop real solutions for them.”

Given the lab’s status within Universidad EAFIT, the university’s students are heavily involved in the work of MediaLab: over 200 students participate in the lab’s projects.

Some of the initiatives relate to the MediaLab’s expertise in transmedia. For instance, TigoUne, a telecommunications company, contracted the lab in 2017 to develop a transmedia strategy in order to redesign its social responsibility strategy aimed at the creative and responsible use of technology in Colombia. “We developed a big strategy for the whole country, and it’s been one of our biggest projects so far,” Villa Montoya says.

The lab also works on journalistic projects, sometimes in collaboration with the university’s courses on digital journalism as part of the bachelor’s degree on Communications. For instance, a project called Narcotour investigated drug traffic and the impact of drug gangs in the city of Medellín.

For this project, the lab collaborated with local and national news publishers in the country, such as the newspaper El Colombiano and the radio station Caracol. “There are a lot of victims and families with tragic stories, and we wanted to tell their stories using new technologies,” Villa Montoya says.

The lab aims to produce similar investigative stories every year, often with support from external media companies. Although such collaborations are important, Villa Montoya says that the differences between commercial media companies and an academic research lab can sometimes get in the way.

“Media companies in the region are just waking up to the convergence and digitalisation,” she says. “They also need to move fast, and as an academic lab we don’t necessarily have enough resources to do that.”

Mapping media labs around the world

In order to explore the highly complex ecosystem of media innovation, the MediaLab EAFIT has an ongoing project to identify and categorise media labs globally. Currently its database includes over 150 labs, categorised in three groups (academic, commercial and social) and classified based on their activities (ranging from research and training to product development and consultation).

This mapping initiative is based on online research, accompanied by interviews with the identified labs. MediaLab EAFIT is preparing to publish a paper about the results later this year, but some findings already give an indication of the state of the global network of media labs.

Geographically, the majority of media labs are based in Europe, followed by North America. However, the research finds that media innovation units are a global phenomenon, and labs are increasingly also appearing in Latin America, Asia, Africa, and Oceania.

The study also found that the majority of labs worldwide operate in an academic context, although surprisingly academic media labs are not prominent in the literature. Nonetheless, most labs concentrate on content production and technology development, with research and teaching taking a less important role.

As for media labs operating in a commercial context, they mostly focus on developing new products and business models to adapt to the changing news environment and digital convergence, while also developing new formats that aim to attract new audiences.

Finally, social labs, usually ran by governments or non-governmental organisations, try to respond to challenges in their communities, for example by organising living labs and hackerspaces, Villa Montoya explains. Typically the aim is to address societal issues such as promoting media literacy by employing new technologies and bringing different professionals together. Examples include Medialab Prado in Madrid and the Vive Digital initiative, which has set up many labs in the Colombian countryside.

In terms of innovation methodologies, Villa Montoya says that the MediaLab EAFIT uses a variety of methods on a case-by-case basis. However, based on her experience, methodologies that are created in first-world countries do not always work in different environments.

“In developing countries such as Colombia, we have a lot of problems with methodologies. We don’t have the same resources, or the same context, that is sometimes needed for the methodology to be applied.”

According to Villa Montoya, her counterparts in developed countries tend to have focused lines of research, and western labs often concentrate on narrowly defined topics. “We have to work in a more reactive manner. We have to adapt based on our funding sources, so we have to be able to work in many contexts,” she says. “It’s important to be really multifaceted and able to work in many fields, and it makes it really difficult to specialize.”

As for MediaLab’s future plans, Villa Montoya is particularly interested in virtual reality and how VR can change the relationship between the content and the consumer. “It’s a big shift in the narrative style, because it forces you to put yourself in the audience’s shoes when you construct stories in VR.”

Finally, the modest beginnings of the MediaLab EAFIT have taught Villa Montoya that a dedicated space and resources are secondary when it comes to starting a media lab – what you need is the right attitude, an open mind and a wish to develop new things.

“I think that it’s a mistake to start with worrying about the place or the budget. It’s much more important to think about the meaning of what you are doing.”

She says that many labs focus excessively on the technology when solving problems, but often the source of the problem arises from human issues. “My advice is not to start with technology but to put your focus on the human problem. And then use technology to solve that problem.” 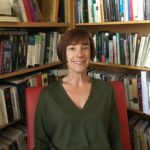 Lori Emerson, founding director of the Media Archaeology Lab at the University of Colorado