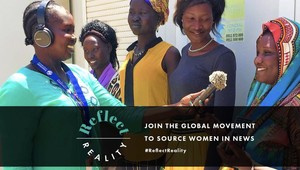 “Women are often at the heart of decision making in all levels of society, be it as politicians, as entrepreneurs, scientists, educators, and at their households,” said Juliana Iootty, Head of Asian Region, BBC World Service Group. “Representing their choices, challenges, dilemmas, passions, and journeys is what journalism is about.”

Globally, only 24% of people heard, seen or read about in the news are women. This gender gap is widest in news about politics and government, where women are featured in just 16% of political news.

The absence of women’s voices in the news contributes to a culture that devalues women – a world where women’s potential is perpetually limited by their lack of exposure to powerful role models, their limited opportunity to connect with a shared experience and the reinforced notion of traditional gender roles. It also means that newsrooms miss out on perspectives that are critical to break stories and grow their audience.

While female experts and spokespersons are abundant, they are often less noticeable to reporters either due to unconscious bias, cultural barriers, and women’s own reluctance to engage with media. Many women experience harassment in response to media appearance. Others may lack confidence in their expertise or ability to engage with media. Reflect Reality responds to these challenges with practical tips, approaches, and tools.

Key contributors to Reflect Realityare United for News coalition partners. Bloomberg reveals lessons from their New Voices initiative, an internal effort to diversify the financial and business experts they turn to around the world. Edelman lends insights from the Trust Barometer and their effort to advocate for gender parity in corporate spokespersons. The BBC’s 50:50 Project shares best practices for news teams to reach gender parity by tracking their sources daily. WAN-IFRA contributes expertise from its Women in News program. Informed Opinions shares strategies on how to cultivate sources and overcome women experts’ reluctance to be interviewed.

“Companies must foster environments where women are empowered to put themselves out there as go-to contacts for media interviews, panel discussions, and more,” said Lisa Kimmel, Chair & CEO, Canada and Latin America, Edelman.

Reflect Reality’s strategiessection is informed by United for News pilot projects with Canada’s The Globe and Mail and the Toronto Star. Both newsrooms tested new interventions into their story production process, with a goal towards increasing female and ethnically diverse voices.

“What we are trying to do is break people’s habits. The intention is there, it’s just that when we are busy, we do things the exact same ways as always,” said Angela Pacienza, Managing Editor, Experience, The Globe and Mail.

“If you want people to pay you, they need to trust you, and they won’t trust you if they can’t see themselves in you,” said Kathy English, Public Editor at the Toronto Star.

Reflect Reality was developed by Internews with support from the News Integrity Initiative and the CUNY Graduate School of Journalism.

#ReflectReality – Join the global movement to source more women in the news by reporting on/promoting/adopting this resource.

About United for News:

United for News is a multi-stakeholder coalition led by Internews in collaboration with the World Economic Forum. It seeks to transform media markets around the world, so that citizens, businesses and governments everywhere can benefit from the positive impact of high-quality, local news and information.