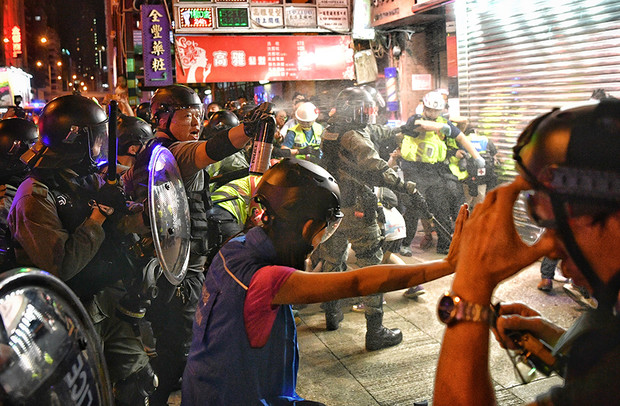 (A police officer uses pepper spray on the media and medics as the police stop the media from photographing the arrest of a bystander who had berated them along Nathan Road in Hong Kong on September 22, 2019. Photo credit: Straits Times / Chong Jun Liang)

Journalist Louisa Lim has been covering the protests in Hong Kong – over the Fugitive Offenders amendment bill – on and off since they began in June 2019. For reporters and photographers on the ground, there is a constant threat of being beaten; sprayed with teargas, pepper spray or water cannons using chemical additives; hit by rubber bullets, sponge grenades or even live ammunition.

But sometimes, says Ms. Lim, the simple fact of being in a large crowd can be the most risky situation for journalists.

“It’s easy to get trapped if you are not careful,” says Lim, an award-winning journalist based in Melbourne, Australia, who has reported from China for a decade. “And of course crowds do have a particularly volatile dynamic, and can sometimes turn on reporters…. During these protests, the mood can shift on a dime and without warning, and police seldom follow their own guidelines.”

Social and protest movements have taken place in most societies around the globe throughout history. As journalists continue to throw themselves into such potentially violent situations – some as local reporters and photographers, others as foreign correspondents – it is essential to be properly trained and know the risks before entering a new environment. Both journalists and editors have a responsibility to make safety a priority in what can quickly become a dangerous atmosphere.

Protest movements can become volatile for any journalist, regardless of experience, but certain profiles are particularly susceptible to hostility. Freelance journalists, who may have not had hostile environment training, access to security advisors or appropriate security equipment – like bullet-proof vests and gas masks – are especially vulnerable.

Female journalists and journalists who are a cultural minority in the country in which they are reporting can be particular targets, says Thomas Durkin, Education Program Director of the James W. Foley Foundation. Mr Durkin says that dangers can present themselves as physical risks but as online harassment and cyberbullying as well.

Shaun Earl Harris, a photographer and founder of Afrika Moves Media Agency in South Africa, was caught up in protests in Johannesburg in September 2019, when South Africans pitted themselves against foreigners. Harris, who is Jamaican and Rastafarian by faith, says he almost got caught up in an angry mob while taking pictures of the damage and loss of life following protests in Johannesburg’s central business district.

“As I passed through the terminal, I saw in front of me a body on the ground uncovered, laying spread out,” he says. “I was recording but wanted to take images, better images, so I took out the camera, raised it to my eye and started to shoot images. Then [I heard] a shout, ‘Hey! What you doing Rasta? What you doing taking pictures?’”

Harris says that with the help of a few locals, he was able to escape a potentially violent or lethal situation.

Sometimes, it doesn’t matter whether journalists are foreign or locals – it is the mere fact of being a journalist that can cause added risk.

Louisa Lim says that while reporting in Hong Kong, she witnessed an escalating violence against journalists by both police and pro-police protesters. Journalists were beaten up inside subway stations and assaulted on the street. There was also a risk of getting injured in the crossfire of protesters throwing Molotov cocktails or bricks at police.

“Working journalists face a wide variety of serious threats including lethal force used against them,” says Lim. “Perhaps just as worryingly, they are being targeted for being journalists, so sometimes wearing high-vis vests and visible ID is actually more dangerous as it draws attention to their status as journalists.”

Being prepared for the worst

Despite the increased risk for journalists of self-identifying as such during a protest movement, most experts – and journalists such as Ms Lim herself – say that using appropriate safety equipment is vital for covering civil unrest. A high-vis jacket, helmet, full-face mask, visible press ID, and bullet-proof vest are a first start for protecting one’s physical safety. Extra phone batteries can be essential.

Journalists should also stay to the edge of crowds and always be aware of possible escape routes. Making sure they are not alone is also vital – pairing with another journalist on the ground or a local fixer, and regularly checking in with a staff member back in the office. This can be a challenge for freelancers, but should still be the goal for all journalists, says Harris.

“Freelancers like to run free, trying to get the best story,” says Harris. “But always liaise with your fixer, newsroom, picture editors – whoever you have direct contact with – so that they know where you are and how safe you are. This can save your life and bring you home safely.”

Of course, even before journalists go out on assignment, there are things that newsrooms and editors can coordinate. Thomas Durkin says that the best way to mitigate risk is through preparation, and that all members of the newsroom – including journalists, crew members and managers – should complete a risk assessment beforehand.

Newsrooms must also clearly inform staff about the support available, from emotional counseling to health or life insurance. And journalists must be realistic with themselves about their physical and emotional thresholds.

“Yes, there is pressure to get out there and get the scoop, but if a journalist deems the risks too great to cover a story, this decision should not be treated as a source of shame or stigma,” says Durkin. “Ultimately, the most important question every journalist must confront is whether the potential risks involved are worth the benefits of covering a situation and completing an assignment.”