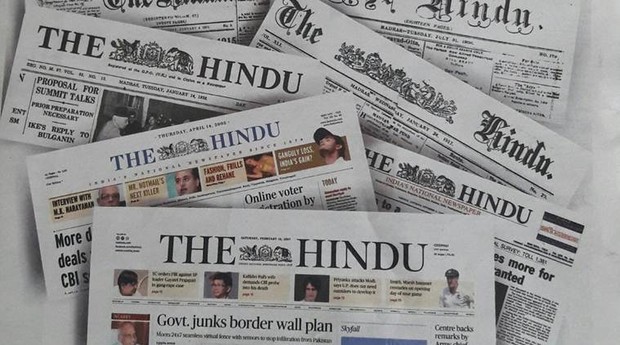 Credit: Screenshot from The Hindu e-paper

Different product offerings require different kinds of paywalls for maximum revenue optimisation. While the company’s financial arm, BusinessLine, has only made certain sections paid, Crossword, e-Paper and Young World Club are all behind a hard paywall. Frontline, the brand’s long form content magazine, and Sportstar, a fortnightly sports magazine, also have a few paywalled stories.

The company won a gold award for having the best paid content strategy, at WAN-IFRA’s South Asian Digital Media Awards in 2019.

Since THG is a subscription newbie, the current subscriber base is low. The company’s long-term goals are directional in nature, and the management aims to take stock of the situation every three months, fine tuning growth targets and strategies, driven by deep business insight.

Though advertising in all areas is taking a big hit due to the COVID-19 situation, THG has made sizable ad revenue in the past and the decision to implement a hard paywall might have resulted in a suboptimal yield.

“We will keep experimenting, and depending on revenue optimisation opportunities, will be open to changing the model for each of our publications” – Pradeep Gairola, VP and Business Head, The Hindu Group

Print advertising has long been the biggest revenue source for most news publishers in India, and it may be some time before reader revenue becomes the primary contributor.

So how does a newsroom that has just implemented its paywall prioritise subscription without letting go of the ad business?

THG nurtured its SEO audience for ad business, at the same time nudging its most loyal subscribers to pay for access. Predictably, The Hindu’s pageviews took a hit, post paywall implementation. The flagship website lost about 20-25 percent of the SEO traffic but made up for lost ad revenue in reader revenue.

Before putting up the paywall, the company studied various markets and prepared itself for loss of SEO traffic.

“In international markets, where most publishers are behind the paywall, search engines have changed their strategy and now do not penalise that content. In India, once reputed publishers start building paywalls, the SEO impact will be nullified for everyone,” – Pradeep Gairola

The company foresaw only a small percentage of its userbase turning into subscribers, and hence ads remained an important source of revenue.

Journey from free to paid

The Hindu website, behind the paywall, became faster after removing advertisements and third-party recommendation engines. Articles and landing pages gained greater cohesion and became unbroken units. These moves empowered subscribers to have a say in the kind of articles, topics, regions and authors they’d be interested in seeing more of.

This level of personalisation surfaced relevant articles more easily, reducing the burden of navigation on the subscriber, enabling them to discover a much wider selection from the story archive.

The Hindu Group also built into its databases a machine-learning algorithm that analyses reading patterns of millions of users to identify the stories that resonate with various cohorts and creates articles for subscribers to widen their reading.

The company further introduced a news round-up mechanism that curates the top 10 stories, three times each day. The user is given the power to access all these features from an intuitive dashboard, giving them a sense of ownership over the content they have subscribed to.

“The larger idea of building an economy with reader revenue is extremely powerful. It has a potential to change the course of the news business in our country,” said Gairola.

“There are some first-mover disadvantages for us, but we learn more from our failures. The only way out is continuous experimentation. We are building a culture wherein ‘failure’ is acceptable, and people are not afraid of it,” – Pradeep Gairola

The company gave users a free trial period of 30 days upon registration. Rather than offers based purely on pricing, THG opted for limited-period subscription packages that included specially created e-books with content from its 140-year-old archive. An e-book on The Hindu’s edition of August 15, 1947 (the day India got independence) helped the company get a number of subscriptions.

THG’s current offering includes four subscription packages for – 3 months, 1 year and 2 years, ranging from Rs 235 (€2.85) to Rs 1599 (€19.41). Due to the COVID-19 pandemic, the company has introduced a couple of short duration plans that are tactical in nature, which they plan to remove once the situation is under control.

Currently, the iOS and iPad applications have free access. Since iOS has a small user base in India, the company’s priority was putting the website behind a paywall, followed by Android. The iOS app is expected to be made paid in the next couple of weeks.

Product strategy of major media houses in the West, that have enforced paywalls, often centre around providing content in formats beyond the traditional article. For a sustainable subscription-based model, it is not enough to put hard news behind a paywall.

What is it that will make people want to subscribe to The Hindu?

The challenges the company faces are both internal and external. Its print value is still way more than that what digital has to offer.

“We are not yet ready to trade our print dollars with digital pennies,” Gairola said. “Print is still a very dominant revenue source and currently, our processes are more print oriented than digital.”

The long-standing question of whether Indians are ready to pay for news or not persists. The Hindu is one of the first legacy media houses in India to enforce a paywall.

“Other publishing houses will have to build alternate sources of revenue as well. In the next 2-3 years’ time, I expect most legacy news organisations to adopt the subscription model,” – Pradeep Gairola

The governing principle for digital businesses is “niche is mass.” Currently only a small percentage of print users are subscribed to the company’s digital properties, and the situation is expected to stay the same for a while.

However, given the large base of users of The Hindu’s online products, even small percentages are encouraging. For instance, if the brand can convert even 1 percent of its 40 million monthly unique user base, it will have 400,000 paying subscribers.

“We also have to remember that this 40 million is a growing number. The overall consumption of news has increased dramatically, fake news is pushing readers towards the trusted sources of news, free time is a scarce commodity, and all this bodes very well for the subscription business,” says Gairola.

Considering the COVID-19 pandemic, The Hindu has doubled its monthly free articles to 20, from the usual 10. The brand has also published an e-book, “The Pandemic Notebook,” containing essential information and helpline numbers, which can be freely downloaded as a PDF.

“This PDF will soon be available in multiple languages, with The Hindu Tamil translating it in Tamil and Confluence, a web-forum of the Indian Academy of Sciences, translating it in eight other Indian languages. The translations are available under the creative common license,” says Sriram Srinivasan, Strategy and Digital Editor.

The company has also made its hardwalled e-paper free for the 21-day lockdown period.

THG ran a trial subscription offering with The Briefcase, a mobile application that provided subscribers with the five most important news stories of the day. The app, which was ad-free and behind a hard paywall, was launched at a nominal price of Rs 149 (about 1.80 euros) for a year’s subscription and ran on minimal marketing support.

While the application garnered a decent number of subscribers, building a sustainable business with such a low price point was difficult and taught the company not to launch low cost offerings.

“Consumers have a value chain that guides their behaviour. People subscribe due to reasons that range from emotional to rational. While launching a subscription business, brand loyalists have an emotional connect and pay for access. As time passes and the net widens, rationality catches up and that’s when the brand must give users the bang for their buck,” – Pradeep Gairola