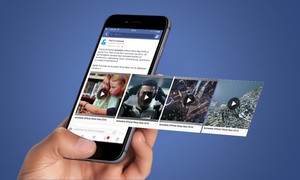 Growth in demand is reflected in statistics such as these:

“In India, BBC produces content in nine languages, including English. While legacy brands – Hindi and Tamil – have been around for years, Tamil, Telugu, Punjabi, Gujarati and Marathi are 2.5 years old and have grown by almost three times,” said Rupa Jha, who heads BBC’s Indian Language Division.

Jha was a speaker at WAN-IFRA’s Digital Media India 2020 conference in New Delhi.

Facebook has chalked out two broad categories to identify people according to their consumption patterns and behavior types, which are mapped to different product functionalities, said Barot.

On-the-go viewing: These are consumers who browse Facebook at random times for a quick tap and scroll. Their behavior is often unplanned and tends to occur at frequent intervals through the day. The primary purpose of this segment is discovery or to keep in touch with friends and family.

This behavior is usually concentrated in the Newsfeed and increasingly on Stories which has been a breakout success in the last 18 months and growing rapidly in India.

Captivated viewing: These are consumers who are seeking relaxation and entertainment, and who login to Instagram and Facebook with an intention to view video. These sessions tend to be longer, usually during the morning, breaks or in the evenings, when people are relatively free.

In the last 18-24 months the brand has been building products to suit this kind of viewing, such as Facebook Watch, Live, Watch Party, Premiers and IGTV.

Facebook Watch, a relatively new intent-based platform, was built for people who log in with a deliberate mindset to consume video. The company says the product, every month, registers more than 720 million global users who consume at least one minute of content on it. On average, daily visitors spend over 26 minutes on Watch, a considerably higher number compared to the Newsfeed, where video consumption is accidental.

The Indian video market is extremely noisy and crowded, and it is important to remember that every story is not suited to a video format.

“If your content doesn’t feel right to be converted into video, present it as text or graphics. Audiences love simplicity.”
– Rupa Jha, BBC’s Indian Language Division

“Every online platform has its own tone and demand. Storyboarding pictures is crucial to producing good videos and form factor is of utmost importance. While a 4-minute video works well for YouTube, 1-minute long, vertical videos are fit for Instagram.

Facebook’s Stories is claimed to be an exciting platform for newsrooms to test and learn new video formats. “We have integrated Stories between Instagram and Facebook for far-reaching distribution and cross posting,” said Barot. This move is particularly helpful for newsrooms who feel their Instagram viewership is different from that of Facebook, he said.

A vertical aspect ratio has become the standard form for optimal video viewing with people increasingly consuming content on their mobile phones.

Newsrooms are training employees to transition from the standard widescreen to intelligently framing shots. Audiences directly interacting with journalists on Facebook Watch or Instagram has helped publishers rake up engagement. Breaking news and live coverage are significant areas to capitalise on, whether it’s an election result or a court ruling.

BBC India makes use of IGTV

Reinventing the wheel for each piece of content is not necessary and working with templates smoothens the production process. “Digital media changes quickly and audience behavior is directly proportional to that change,” said Jha. “Engaging with data to guide our content strategy is crucial. Coverage of elections in India is a challenge. How we can make our storytelling different from what hundreds of other players are also reporting on is a challenge. It is important to revisit our basics.”

It is important that journalists treat a video like a call to a friend. A personal connection is built in looking straight at the phone, with tightly cropped head space. A rule of thumb is to try and create content that has a retention rate of at least a minute, or three minutes if the publisher intends to monetise the video by adding in breaks.

Paying attention to technical specifications is as important as building a personal connection. Audience is a publisher’s biggest growth engine and using as high a resolution and encoding as possible within capacity helps. A common mistake journalists make is that they create content for people like them; it is essential to deconstruct stories and assuming less knowledge on behalf of the audience. The key is to humanize the content, not dumb it down.

Featuring relatable personalities in videos helps garner engagement. This becomes especially important during crisis situations such as COVID-19, when ground reportage sees a hit. “It is important to lend authenticity and relatability to keep the audience engaged. Find who your stars are within your team. These people need not be your typical TV anchors,” said Jha.

Journalist Faye DSouza, former executive editor of Mirror Now, has established a brand for herself on Instagram. She makes use of Instagram posts and IGTV to disseminate news, often left uncovered by mainstream media, to her 300K followers.

Several organisations have now become comfortable using Facebook Live, which was built in 2016. The fact that the product encourages social viewing and not just passive consumption helps news organisations rake up views. Viewers feel involved if they can contribute to the content through real-time questions and comments, particularly effective during breaking news, television debates or political rallies and protests.

Brands, now, are also effectively experimenting with live polls, which are available in different formats within the Facebook video platform. Live polls are claimed to be a great way to get a sense of public opinion, and to ascertain what the audience wants to see more or less of.

Facebook’s Creative Studios, built over the past few weeks, is claimed to be a powerful, all-encompassing tool to help publishers with video production and get their hands on performance insights, new followers, time spent by viewers. It also is claimed to help publishers figure out how they can start subscriptions, brand collaboration, assess monetisation, and projections around it.

Facebook will be testing its video accelerator programme in India this year, after having tried it out in the USA, South America and Europe.

Jha said it is important to keep audience interests in mind while producing content. “Even though we get content globally, audience behavior determines which geographical area it is to be shared with,” she said. In India, BBC audiences tend to drop off if there are too many foreign languages, faces or accents.

In 2020, BBC plans to foray into investigative video storytelling, that have a relatively longer shelf life than news videos. The brand also plans to experiment with technology, collaborate beyond the coterie of journalists with artists and independent studios.

The impact of COVID-19 on news videos

As the COVID-19 pandemic unfolded, Facebook sent all its global content reviewers home. Naturally, this had a direct affect on monetisation. By March 18, all videos submitted for monetisation were required to go through a brand safety review process. The brand temporarily suspended monetisation of newly uploaded non-English videos.

By March 27, the company began exploring supplemental compensation solutions to help with lost advertising revenue, based on historical performance of a page’s content.