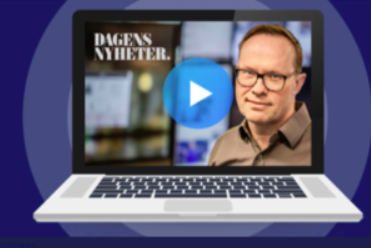 During a WAN-IFRA Webinar in mid-April, Martin Jönsson, Head of Editorial Development at DN, told more than 250 registered participants from around the world that this welcome development is largely due to two key factors.

First, DN doesn’t have a single paywall strategy – “We have several,” Jönsson said. Second, the Bonnier-owned publisher has spent the past five years transforming itself from its traditional, print-dominant culture to a digital-first news organisation that relies much more on reader revenue (70 percent) than on ad revenue.

“Being a digital-first organisation has helped us a lot,” Jönsson noted.

Before the crisis began, DN already had more digital subscribers than print ones (56:44 percent), and this had been developing for some time. “The number of digital-only subscribers had increased over three years by 182 percent,” Jönsson said.

Pre-Corona, DN had 1.1 million daily readers, but Jönsson said now, “it’s much higher than that: it’s up to between 1.6 and 1.7 million (Editor’s note: Sweden’s population is approximately 10.3 million). Also pre-Corona we had 330,000 paid subscribers.”

Today, he noted, they have 460,000 subscribers, which is an all-time high for them (150,000 of these are print subscribers, and the total figure also includes registered users).

Thanks to a recent campaign to open up the DN site until early May to users who register, Jönsson said they have added 115,000 new registered readers. “This is a record number for us,” he said. “In the previous times when we have tried this, such as with the general Swedish election, we’ve had 40-45,000, so this is enormous.”

Most interestingly, Jönsson said, is that DN has also managed to bring in record numbers of new digital subscribers – more than 8,000 a week during some weeks.

“We’ve seen 350 percent growth compared to the previous best weeks we’ve had this year. So we have growth on both levels – on registration, and on traditional paying subscribers.” – Martin Jönsson

New ways of working, and some setbacks

However, like publishers throughout the world, DN has undergone some drastic changes since the outbreak began. For example, Jönsson said about 90 percent of employees are now working from home, and have done so for the past month. This includes the editor-in-chief and most of the people in top management.

“We have a lot of [online] meetings on a daily basis,” he said. “We’ve also done some temporary layoffs (20 percent) due to a quick and drastic fall in ad revenue (25 percent).” While the growth in web traffic (an increase of 125 percent) compensates a little, it is not enough, he added.

“The growth in subscribers is fantastic, but that will also be delayed revenue,” he said. “So, right now we have to cut costs to get a balance.”

As part of this, DN has instituted shorter working hours, for at least some staff, Jönsson said, adding, “It’s very hard, because we have some people who have the disease. We have people who are affected by close relatives who have it, so it’s affecting us, as it’s affecting the entire society. It’s also difficult when everyone’s working from home, but I am happy that we’ve come so far in our digital transformation process because if this had happened five years ago, it would have been very, very hard for us.”

Now, about those paywall strategies…

As mentioned above, DN uses a variety of paywall strategies. For example, they have a metered model, but they also have a premium model and one Jönsson called a dynamic dashboard model, “where we see what kind of content works, keep it open (freely available) for three or four hours, and if we have a lot of high external traffic and direct traffic, we’ll put the content behind a paywall. It’s very flexible.”

DN has further refined these strategies during the past few years.

“When we first started on digital subscriptions, everything was focussed on acquisition,” he said. “Then, we realised that we had growing problems with churn, so we focussed on anti-churn. And the past two years, we’ve been focussed much more on the cost-of-the-reader revenue business: The acquisition, and how we can keep and improve the lifetime value, the net value of each subscriber to find the right offer, the right package, the right pricing in order to get people to stay on for a long time.”

Likewise, DN has tweaked its paywall strategies in regards to COVID-19 content, and was among the earliest paywalled publishers to make that content free. As time has passed, the general health-related content has remained free, but other related COVID-19 content, such as longer reads and opinion pieces, have gone behind the paywall.

Overall, DN’s paywall strategies have developed in parallel with investments in their content during the past several years to ensure they are producing high-quality content that will keep readers engaged and encourage them to return regularly, Jönsson said.

“Our most important KPI is always the total amount of time spent on a story. Anything you can do to get people to create new daily habits, such as listen to a new daily podcast, or opening a daily newsletter for instance, is very, very important to creating the kind of daily habits that you want to keep them around for a long time.” – Martin Jönsson

“To aim for digital loyalty we have to work very much on digital quality, and right now, to show as many readers as possible in Sweden that we are the best source of coverage of Corona,” he added.

DN is trying to ensure that these readers also spend time with their other content to develop habits and a relationship that will encourage subscription growth over the long term.

For example, as mentioned above, in mid-March DN decided to open up its entire website until early May, requiring only that a new reader registers with their email address. People who have previously subscribed to DN are asked for additional details.

“This has been the key to our entire strategy: to say that it’s not just the open corona coverage, that if you like the corona coverage that we have, you might also like the entire website,” Jönsson said. “So, we offered a registration wall, so you could get access for about six or seven weeks, until early May, if you just sent us your email address and so on. No payments, no credit card details, just register so that we could get your contact information.”

He added that last week, DN decided to open its website and epaper editions to students, who are all now at home. This offer will continue until mid-June. Students are required to provide their social security numbers.

“All people in the higher education levels in Sweden are sitting at home, so we offered all home-schooling students total free access, not only to the website as previously, but also the epaper. So, we have many different ways to reach out and many different offerings to get leads,” Jönsson said.

During a question-and-answer session at the end of the webinar, Jönsson said that their most important learnings so far from the crisis is that the staff overall “has taken a giant step forward to being a truly digital organisation. … And the other learning is to be open to change. We’re trying to be very dynamic and try numerous different things, and trying to be creative in the process so that in the long term, we will be able to say that we have learned from this, even if we don’t see revenue in the short term.”

For more details about Dagens Nyheter’s digital transformation during the past several years, please see the below article from when we visited them during a WAN-IFRA Study Tour late last year: