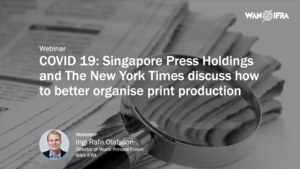 The situation in Singapore (Home to Singapore Press Holdings)

Guidelines and communication to the staff

The situation at The New York Times

Ensuring distribution and protection of carriers

Concluding the webinar Lim Swee Yeow from SPH remarked that the crisis has been a good learning experience.

“One thing that becomes clear from this is that paper is an essential product – be it in printed version or digital version. (Prior to this) readership has been dropping, at least the younger generation has not been reading much in terms of papers. I think these experiences will change some things for some people who will come to see that paper is something they can rely on for information.” – Lim Swee Yeow, Singapore Press Holdings

Find the full video recording of the webinar below.

This was part of a series of weekly WAN-IFRA Webinars addressing newspaper production during the COVID-19 crisis. Please check https://events.wan-ifra.org/webinars frequently for upcoming webinars.