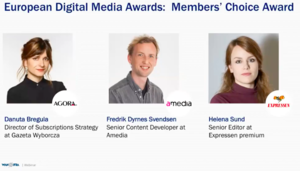 Attendees of the webinar had a chance to vote during and after the webinar and the winners (which will then qualify for the World Digital Media Awards competition) will be announced tomorrow.

Here are our takeaways from the finalists’ presentations:

First published in 1989, Gazeta Wyborcza is the biggest newspaper in central Europe and produces 20 local editions besides the national edition. Poland has a culture of free digital news consumption and does not have a tradition of either newspaper home delivery or paywalls. People prefer making bank payments rather than using credit cards and are resistant to recurring payments.

Bregula is part of the core team leading transformation (traffic sources, social media, product, audience, development, reader revenue) at Gazeta Wyborcza. As of February 2020, the company had 240,000 digital-only subscribers, but this milestone did not come easy.

In 2018, only 11 percent of the brand’s subscribers were ready to opt in for a recurring subscription. Users not sharing credit card details resulted in a higher churn rate and a low average revenue per user (ARPU).

As a quick fix, the company began selling one-off, discounted, annual/quarterly access, which meant avoiding fighting a high churn rate on a monthly basis. Even though this resulted increased subscriptions to 10,000, about 80 percent of the users did not renew their subscriptions, and the long-term aim of having a stable revenue model was unfulfilled.

Results
Within a year of implementing these changes, Gazeta was able to reduce the number of promotional offers, register a 50 percent drop in churn and a much higher ARPU. The share of users with recurring payments grew at a rate of 70 percent and 2019 saw a 30 percent overall increase in subscription growth.

Amedia AS, the second-largest media company in Norway, produces 74 local newspapers and one national newspaper. Fredrik Dyrnes Svendsen, a Senior Content Developer, said the company’s biggest challenge is that the majority of its subscribers are older than 50.

“Our content tends to be relevant for people over 50 years of age, simply because they are our biggest target group,” Svendsen said. “However, one of our aims, a year ago, was to even out this imbalance and attract people under 40.”

How did Amedia engage millennials?

The company address this two phases.

After a year of implementing these changes, the brand’s subscription growth is now mainly driven by users younger than 40. “The COVID-19 crisis has shown us that younger audiences are just as interested in hard news as older people,” Svendsen said. “We have never had so many people under 40 reading our articles.”

Expressen, published by Bonnier and counterpart to the publisher’s quality daily, Dagens Nyheter, is a liberal newspaper that was founded in 1944, during World War II, to fight Nazism in Sweden. The company has a newsroom staff of 270. During the past five years, the brand embarked on a digital journey that has produced impressive results:

“We are on the top in Sweden in terms of Facebook engagement, Google visibility and print paper,” said Helena Sund, Senior Editor.

Zero to 70,000 subscribers with a data-driven approach

Expressen reaches 70 percent of Sweden’s population through its newspapers and website. The company’s goals, therefore, in the runup to launching Premium was to make the product indispensable by providing quality content and attracting as many subscribers as possible without negatively affecting the brand’s already established digital reach.

How did they do it?
The brand studied the successes and mistakes of its competitors, and shared all of their findings with all employees. Editorial, analytics, tech and commercial teams worked closely together to make smart, data-driven decisions. Three key strategies which propelled the company to success were:

Results
In addition to going from 0 to 70,000 subscribers in only one year, Expressen also met its revenue target and exceeded its goals for churn and retention; all this while increasing its digital reach.