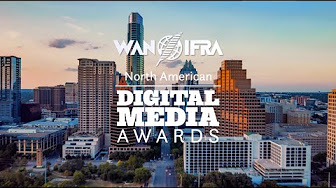 WAN-IFRA would like to thank everybody who took part in the North American Digital Media Awards 2020 competition; from the participants to the top-level international jury. We were delighted to see so many innovative projects serving the future of news. You will find the full list of 2020 winners below.

The Washington Post’s work in 2019 continued to shape the national discussion. The Post released the landmark Afghanistan Papers, an exhaustive report that detailed U.S. officials’ attempts to mislead the public about progress in the war. The trove of documents was obtained and released exclusively by The Washington Post. The Post also continues to push forward as a technology company, experimenting with new publishing strategies, more immersive storytelling and a massive growth in digital subscriptions.

“The Washington Post is providing readers with top quality journalistic content, innovative digital storytelling, a smooth and friendly user experience. This is all reflected on their website, its different sections and the great technology behind. Definitely a world-class news website.”

The Globe and Mail developed an artificial intelligence engine called Sophi, which currently curates 99% of their content autonomously, according to them. Sophi’s job is to analyze each story’s potential and performance in terms of subscriber retention, subscriber acquisition, registration potential and advertising dollars. Sophi determines what to promote in digital, print and social media in order to help journalists allocate their work hours more efficiently and to automate web pages to free up valuable talent to do journalistic tasks. Sophi also determines what to leave in front of the paywall to maximize advertising revenue and drive subscriptions.

“Very impressed with Sophi. The most important and attractive piece from the creation of this AI is that editorial input was key to it. In many newsrooms, the business models undermine the value of their key product but from this presentation it’s evident that it was not the case for The Globe and Mail.”

Refusing to put all eggs in one basket, STAT has turned to the event business as a way to diversify its revenue streams. STAT began hosting in-person events for its hyper-loyal community of digital subscribers (STAT Plus). Up to this day, events have been their most successful revenue stream, resulting in gains of up to $100,000 in ticket sales and nearly three-quarters of a million dollars in sponsorship.

“An impressive case study showing the importance of understanding your target audience and putting readers at the heart of your recurring revenue strategy.”

Bloomberg Media partnered with BlackRock, one of the world’s largest asset managers for individuals, professionals and institutions. BlackRock aimed at demystifying and broadening the access to their management portfolio called Factor Investing, amongst an audience of Financial Advisors (FAs). To do so, Bloomberg’s AI research tool identified FAs’ professional and personal interests and found ways in which Factor Investing could be a lot less complex to understand. According to Bloomberg Media, 69% of campaign recognizers said they were likely to invest in BlackRock.

“The campaign demonstrates, through engaging content, what this type of investment strategy entails; it is surprisingly successful in doing so. The display mechanisms are clear, the content is witty and dynamic and leverages audience interests in an entertaining way.”

The Atlanta Journal-Constitution (AJC) carried on an investigation into Georgia’s booming senior care industry and its failure to protect senior citizens. AJC found out that families pay thousands of dollars to take care of their elders but didn’t really know that systemic issues of neglect and abuse, as well as a lack of regulatory oversight by the state, were taking place. A behind-the-scenes video of the investigation – which is at the core of AJC’s values around hard-hitting journalistic work, commitment to exposing the truth and public service journalism – built up a successful marketing campaign for the brand.

“An important project, featuring very commendable investigative work that embodies the mission statement of journalism and is executed well, with thoroughness and humanity.”

Vox raised awareness over nature-based climate solutions often ignored by the current tech-worshipping culture. Vox paired their journalists with local photographers in Brazil, Indonesia, and the Democratic Republic of the Congo to meet the scientists studying the forest ecosystems of 3 special supertrees that are able to contribute to climate thanks to their scientific composition. Vox produced 3 longform pieces on each supertree, further describing their threats and policy making around their protection.

“This is a fantastic project that embodies, in both style and substance, what well-conceived, thoroughly researched, and beautifully executed visualizations, can do to both inform and entertain audiences.”

Puerto Rico manufactures and produces different local products. El Vocero de Puerto Rico created a video series on Facebook to showcase the uniqueness of each one of these products as well as the cultural background behind their making. Up to today, El Vocero has produced three video episodes followed by a full in-depth business story. According to them, these have been the most organically viewed videos of any special project produced by them in 2019. With three videos, they achieved more than 381,000 organic views and more than 83,300 engagements.

“A unique approach to covering local business. Combination of video, images and in-depth business stories. Evidence of audience interaction on Facebook and news site. Impressive views and engagement figures across the platform.”

The Washington Post launched a branded TikTok account in 2019. It connected The Post to a new and younger audience and worked over time to show them what journalism is and how important it is to society. The creative video team at The Post came with a noble mission: restore trust in the media and gain new audiences through funny, informal content. “We are a newspaper” currently has more than 19 million “likes” and a legion of fans who engage with it.

“Love seeing the Washington Post taking content to the platform of the moment. This is where Gen Z lives! Two thirds of TikTok users are under 30. The casual/conversational tone is engaging and brings a face to the newsroom to help restore trust in news and build new audiences.”