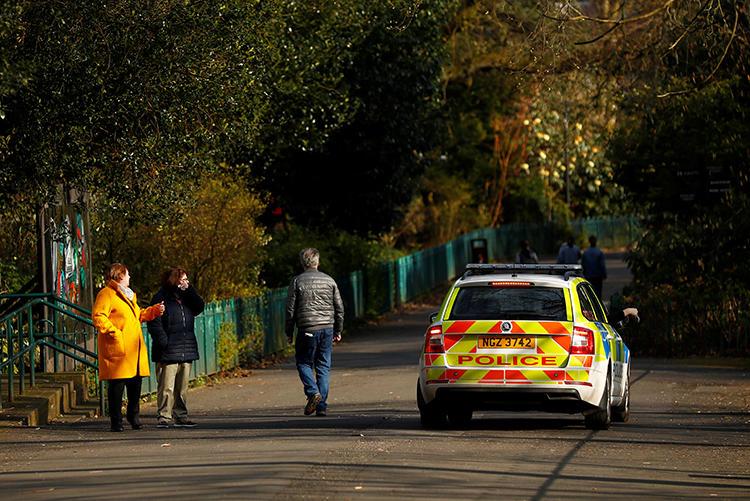 A police car is seen in Belfast, Northern Ireland, on March 26, 2020. Police in Belfast recently warned several journalists of ‘imminent’ attacks against them. (Reuters/Jason Cairnduff)

On 8 May, the Police Service of Northern Ireland (PSNI) warned a number of journalists about imminent attacks, including details of a planned booby-trap device to be fitted under a journalist’s car. Members of the South East Antrim faction are understood to be behind planned attacks on journalists working for the Sunday World and Sunday Life newspapers. Both the Sunday Life and Sunday World have covered the South East Antrim UDA in their coverage of the murder of Glenn Quinn, as well as the UDA’s role in the Northern Irish drug trade.

Stand up for Journalism

Over the past 12 months we have witnessed with alarm an increase in the number of violent threats against journalists in Northern Ireland.

This month Loyalist paramilitaries have threatened all journalists working at the Sunday Life and Sunday World newspapers in Belfast. This follows recent threats against a journalist working for The Irish News.

Attempts to intimidate journalists have come from dissident Republican and Loyalist paramilitary groups and are intended to prevent the media from investigating their activities and exposing criminality.

Threats against journalists and media organisations have no place in our society. It is vital that such behaviour is not tolerated. No worker should be exposed to threats for doing their job.

At a time when the media is playing such an important role in covering the terrible Covid-19 pandemic the recent, blanket threat is especially worrying.

Elected politicians who criticised the threats have now become the subject of intimidation from groups without any mandate.

Attempts have been made to silence public representatives for defending the right to freedom of expression.

Public support has sustained journalists during the dark days of the past.

Today we assert the right of our communities to be informed by journalists operating without fear or intimidation.

It is the function of the media to ask difficult questions, to speak truth to power, to expose corruption, to shine a light into dark corners.

Journalists in Northern Ireland will continue to do so.

A free, independent media is a cornerstone of democracy.

No group can be allowed to undermine the freedom of the press. Every effort must be made to ensure that those who are guilty of intimidation are brought to justice.

We call for the immediate withdrawal of all threats against journalists in Northern Ireland and for the freedom of the press to be respected and protected.