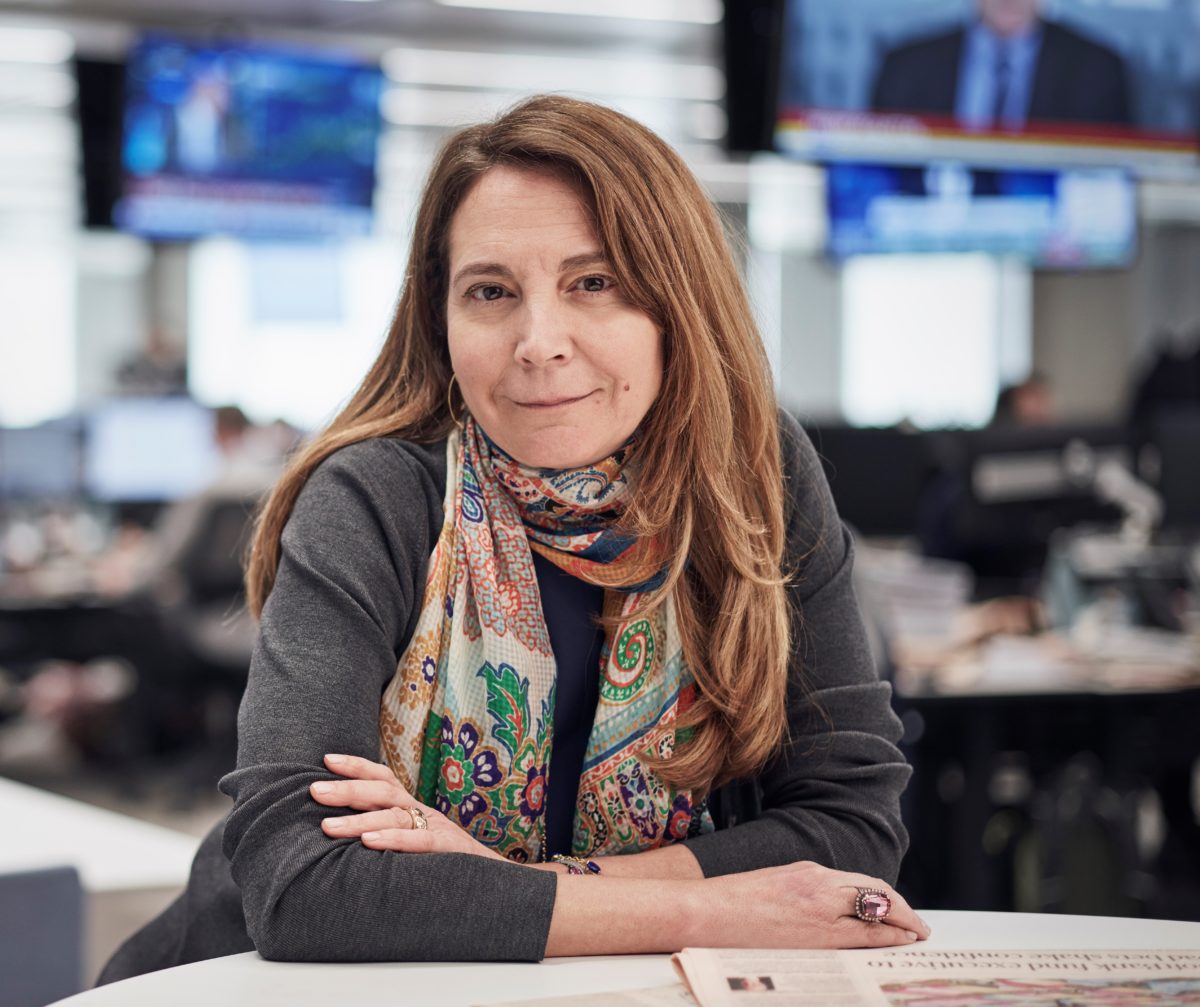 The Q&A session covered everything from gender diversity to new products to innovation, but, naturally, the pandemic framed everything.

A 25-year veteran of the FT, and Deputy Editor from 2016, Khalaf took over as the first female editor in the 131-year history of the paper in mid-January. Less than two months later, the newsroom of some 600 journalists that she leads suddenly found itself dispersed and working remotely.

“We have discovered how flexible and how nimble our newsroom is. To be able to, from one day to the next, produce the website and the print newspaper from home is something that if you’d asked me two weeks before if this was possible, I would have said ‘No way.’ And it’s been largely seamless, much smoother than I would have expected,” – Roula Khalaf

“For us it’s been both a huge challenge, but also just an amazing opportunity because it’s been the story of our lifetime,” Khalaf said. “Part of it is our sort of sweet spot, which is the business and the economic side, but it’s also opened our eyes to the science reporting that we have which has really blossomed during this period.”

Another high point for the FT has been its data journalism, especially its data tracker. “Our coronavirus tracker is our single most viewed piece of journalism ever,” she said.

As for the benefits and downsides of working remotely, Khalaf said “a lot of reporters can work from home without any problem, without any issue. I’ve learned that I would prefer for news editors to be in the newsroom. I have also learned there is an element of serendipity that we miss, that there is an element of creativity that may not be as sharp when you are working from home.”

“I think overall you can do this for quite a while,” she added, “but for me it’s not what I would like to do in the long term. I do think this will allow us to create more flexibility for journalists in general, and I think that is something that will endure. But not to be a completely remote working organisation.”

Good communication throughout an organisation is always an important factor for success, but it becomes especially crucial during a crisis.

“I think as a leader what you also have to do is communicate more. You have to be more transparent with the staff about what is going on. So I have found myself writing more to the staff than I might have otherwise or that they are used to from the editor,” – Roula Khalaf

Furthermore, she said she is trying “to make sure that everybody feels involved, so everything from hangouts with groups of reporters to making sure that every team leader is in touch – not just individually with their team members, but also as a group, so that reporters and editors feel that they are part of a small group.”

Budget cuts, but not job cuts

While there have been some cuts in compensation and bonuses at the FT, these have been largely confined to the upper levels of management, Khalaf said.

“I was quite determined that we could not cut the pay of staff in the newsroom because people were working even harder than normal. But we have had to take other measures in the newsroom,” she said.

“The key for us from the start was also job protection, so we made a promise of job protection: Nobody will lose their jobs. We could not send people out to a job market such as the one we have today. And I think we made decisions early on that have allowed us to not be firefighting every single week, but to refocus on our core strategy,” – Roula Khalaf

Instead, she said, the FT went through its newsroom budget and tried to reduce expenses as much as possible.

“All of the measures that we have taken are temporary. They are for six months, and they will be reversed,” she said.

Khalaf also noted that on the business side, the FT’s decision a decade ago to focus on a subscription strategy has proven to be the right one.

“Our conviction that that is the way to go has been reinforced by this crisis,” she said. “We have seen extraordinary levels of traffic to FT.com and our previous high was around Brexit and the year after Brexit. What we have seen now doesn’t compare, it’s twice as much. We have also attracted tens of thousands of new readers who have stayed and who have subscribed to the FT after getting a taste of the FT. It’s been a very good crisis from a subscription business point of view.”

Likewise, Khalaf is very straightforward in what it will take to keep these readers and convert them to subscribers.

“Whether it’s in the US [where the FT is working to expand] or elsewhere, we have to remain focussed on our core business and finance reporting. This is what we provide that others don’t. … I think of our US operation as an insurgency: you have to pick your battles and you have to make sure that you can succeed in certain areas,” – Roula Khalaf

For the FT, two of these areas are technology, which they have expanded coverage of during the past couple of years, and also energy. “If you look at what our US readers want, energy stories are just off the charts,” she said.

In addition, she noted that the FT does “very well on our coverage of the Fed, economics and trade. For example, last year, we started a vertical called Trade Secrets, and we have a daily newsletter that just reports on trade and that has been very successful. So I think it’s very important to pick your battles, to be very focussed and to zero in on where you can have competitive advantage rather than just try to compete across the field.”

A few years ago, Khalaf said the FT began looking at what they could do to attract more female readers. The newsroom’s audience engagement team came up with a tool they called JanetBot to alert news editors when the number of published pictures of women went below a certain minimum level. It was one of several related initiatives the FT started, Khalaf said.

“We wanted to project the image of a news organisation that can appeal not only to men but also to women and also to different age groups,” she said.

Another bot tracks the number of women who are quoted in FT stories.

“The big piece here is really raising awareness within the newsroom. Once you raise awareness it becomes part of what editors and reporters write. And of course there are still stories that don’t mention women because we are also writing about a world where men still dominate, but I have to say that I have been really, really pleased with the change that I have seen,” – Roula Khalaf

Today, she said, there are a lot more women quoted in the FT.

“And now because we are part of what’s called the 50:50 Project, we actually do it manually as well, we count. It’s totally voluntary … all of these measures have to be voluntary as you are raising awareness, but little by little they get used to it. So all we do is track: The data is there, it’s transparent, everybody can see it, and different desks can see what other desks are doing. It creates a certain dynamism where every desk wants to improve.”

Furthermore, she said the company has set targets for its leadership groups and is on target to meet the ones for this year.

“I have found that targets help,” she said.

In addition, in recent years, Khalaf said the FT has been making a concentrated effort to track the career progression of women and try to identify who can be leaders of the future.

“I suspect that for many of us there is still work to do in the middle level,” she said. “We tend to hire more women than men now, but because of legacy issues and because that in the past we hired a lot more men, what you have in higher levels and middle levels, you still have far more men in the organisation, leading news desks, for example, or leading teams.”

“On racial and ethnic diversity, we still have a lot of work to do. We have done much better with trainees and interns, but now the push is going to be on attracting talents at different levels of the organisation because I don’t think we can wait for trainees, it will take 10 to 20 years before they reach leadership positions. So I think you have to work at every level of the organisation,” – Roula Khalaf

New products and areas of coverage

Looking ahead, Khalaf said a major focus will be on climate change.

“One of my main projects for 2020 was the Climate Change hub, which we were going to launch a couple of months ago, and that has now been delayed and will launch in September. I think with COVID-19, it’s even more important for us to focus on climate change because we believe that the recovery should be a greener recovery and despite all the pronouncements that we don’t slip back into the old normal,” she said.

“We need to constantly think about where the story is moving and how to redeploy resources. There are, for example, several new jobs that I think we should have in a world that is post-Covid. One is employment. We need to be writing a lot more about employment. But who’s going to do that? How are we going to do that? What is our strategy for that? And there are always changes that we are making in the newsroom that allow us to stop doing something because the story has moved on.”

Looking ahead to the next year or so, Khalaf said that the story that the FT needs to own is the economic and business story.

“This is a recovery that’s going to take us to a point where there’s still a lot of scarring. There are companies that will go bankrupt, there will be massive levels of unemployment – these are the stories the FT has to own. There is a lot that will be going on in the next year or two, but this is a story that we absolutely have to own, and I have every confidence that we will own,” – Roula Khalaf

On the topic of digital transformation, Khalaf offered this advice to an audience member’s question: “It takes many years of a transition, it doesn’t happen suddenly. I think it takes a change of mindset, so you have to start making structural changes within your newsroom and make sure that you can carry people along [through ongoing training, for example]. I’m not going to pretend that this is something you do overnight or that it’s seamless or that it’s easy: It’s a journey. It’s really a journey.”

“You don’t suddenly build up skills,” she added. “We have the whole data journalism team now that 10 years ago we didn’t have. Today, everything we think about is purely digital. When I talked about the Climate Hub, that Climate Hub has nothing to do with print, and will probably have hardly any interaction with the print editors. But it’s building blocks, steps that you have to take on this journey, and it never ends in a way. You have to keep innovating. It’s really important that you keep innovating. It’s not ‘I have a plan, I put it in place, and then that’s it. I have a digital organisation and I don’t move.’ You have to constantly innovate.”