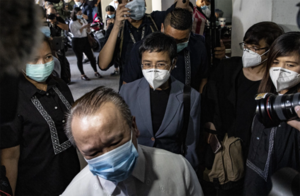 “We are appalled by the court’s decision and urge Maria’s guilty verdict to be quashed at the earliest opportunity,” said WAN-IFRA CEO, Vincent Peyrègne. “The law is being applied retroactively and is now a threat to all independent publications in the Philippines. This is a dark day for press freedom in the country, and a dark day for all Filipinos.”

Ressa, founder and Executive Editor of Rappler, was charged along with former researcher and writer, Reynaldo Santos Jr., for an article the news site published in 2012.

The piece, written by Mr Santos Jr., revealed businessman Wilfredo Keng’s alleged ties to drug smuggling and trafficking as well as his relationship with a senior judge. Mr Keng filed the complaint in October 2017, more than five years after the story appeared.

Despite the elapsed time, and the fact that the law the pair have been found guilty of violating was passed only four months after the original article was published, the Justice Department had argued that the article was effectively republished in 2014 when a Rappler employee edited a spelling mistake, bringing it into the law’s jurisdiction.

Rappler had argued that in her capacity as Executive Editor, Ressa did not edit the piece herself and could not be held responsible. The fact that the prosecutors pursued her and not the editors directly responsible for the article was, to many, an indication of political motivation behind the charges.

Rappler was found to have no liability, but both Ressa and Santos were found guilty. They are entitled to post-conviction bail, and can appeal the case in the Supreme Court. They have been ordered to pay P200,000 (US$3978.37) in moral damages and another P200,000 in exemplary damages.

Maria Ressa and Rappler have become synonymous with opposition to Filipino President Rodrigo Duterte and his administration’s controversial war on drugs. Rappler has consistently spoken out to detail the effects of the government’s policies on human rights, particularly related to police violence and extrajudicial killings. Ressa herself has become the target of horrific online abuse and has denounced the ‘weaponization’ of social media, particularly Facebook, by pro-Duterte supporters.

As a result, the cyber libel case is just one of seven more cases facing Ressa involving allegations of tax evasion and controversy regarding the ownership of Rappler. She and the company have denied all the allegations.

Today’s decision will have a chilling effect over the media in the Philippines and confirms the opinion of the United Nations’ high commissioner for human rights that there is “a pattern of intimidation” of independent media in the country.

“To the Filipinos watching this, this is not just about Rappler,” said Ressa in a press conference after the verdict. “This is not about us. This is about you. Because freedom of the press is the foundation of every single right you have as a Filipino citizen. If we can’t hold power to account, we can’t do anything.”