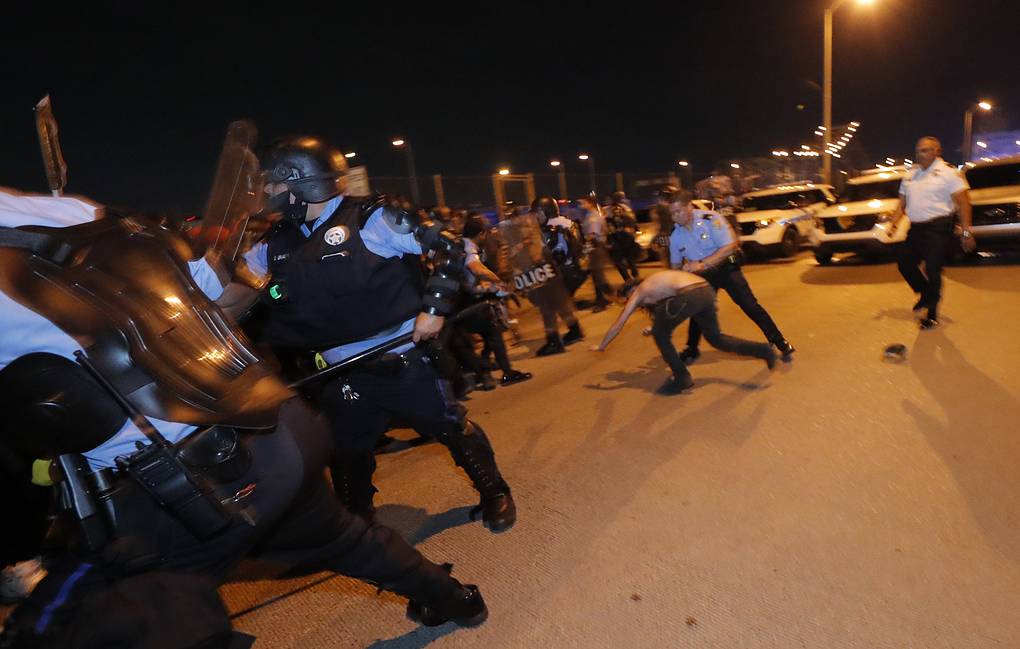 Protesters breach a line of police atop the Crescent City Connection bridge, which spans the Mississippi River in New Orleans, Wednesday, June 3, 2020, during a protest over the death of George Floyd, who died May 25 after being restrained by police in Minneapolis. (AP Photo/Gerald Herbert)

It calls for thorough investigations into over 400 attacks on media professionals reported to the US Press Freedom Tracker – a non-partisan online resource that documents press freedom violations in the United States – related to coverage of nationwide protests against police brutality and in support of social justice following the death of George Floyd in police custody.

“If justice is to be delivered, if the nation is to address the historic failures at the root of these latest protests and begin the long process of healing, then citizens, policymakers and law enforcement officials need reliable independent information to assist them in this process. Journalists need to operate freely and in safety, without fear of attack,” the letter says.

The letter urges President Trump “to carefully consider” his power to influence action and opinion, both at home and abroad, and “to find the appropriate language that will stem the violence and protect journalists from further attack.”

Reminding the president of Constitutional guarantees protecting the freedom of the press and that are admired across the globe, the letter urges President Trump to reaffirm the United States’ historical commitment to a free press “clearly and unambiguously, so that it is heard across the country and may resonate around the world.”

“Attacks against journalists must stop. Attacks already perpetrated need to be investigated to the full extent of the law, and the press must be free to carry out its essential role safely and without fear of reprisal.”

ABOUT WAN-IFRA WAN-IFRA is the World Association of News Publishers. Its mission is to protect the rights of journalists and publishers around the world to operate independent media. WAN-IFRA provides members with expertise and services to innovate and prosper in a digital world and perform their crucial role in society. With formal representative status at the United Nations, UNESCO and the Council of Europe, it derives its authority from its global network of leading news publishing companies and technology entrepreneurs, and its legitimacy from its 80 national association members representing 18,000 publications in 120 countries. www.wan-ifra.org

ABOUT THE WORLD EDITORS FORUM WEF is the leading WAN-IFRA’s network for editors and news organisations around the world. It is built on a commitment to defend press freedom and promote editorial excellence. It was established around two decades ago and has since built up a network of editors around the world who focus on building the capacity of newsrooms through training, innovative practices, conferences and sharing of experiences. It is part of WAN-IFRA – the global organisation of the world’s press. Read More