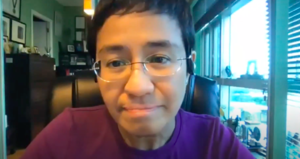 The COVID-19 pandemic has fueled political divisions and given rise to a spurt in misinformation. In June of this year, Ressa was found guilty of cyber libel and faces up to six years in prison over an article that was published in 2012.

In 2018, Rappler, which is known for its extensive coverage of President Rodrigo Duterte and his war on drugs, was slapped with 11 criminal cases and in 2019, with eight arrest warrants. Human rights and press freedom advocates say the charges filed against Ressa and Reynaldo Santos Jr, a former Rappler researcher and editor, demonstrate how the government is cracking down on media freedom and the independent press in the Philippines.

As Maria Ressa prepares to return to court in Manila on 22 July, the #HoldTheLine Coalition demands the Philippines authorities drop a barrage of bogus tax and foreign ownership cases against her.

According to Ressa, technology has taken away the gatekeeping powers of journalism and polarised society. The onus of the global fall in trust levels in news is not on journalism alone. “Part of the blame lies with the world’s largest distributor of news – Facebook. Polarisation is built into social media platforms,” she said.

In 2016, Duterte came into power by using social media to his advantage, the first Filipino president to do so. “In July 2016, the drug war began and social media was weaponised. The attacks were exponential. When Rappler published a propaganda war series and a drug war series, we came under attack that was meant to pound us to silence, and take away our narrative,” Ressa said.

The largest television network in the Philippines – ABS-CBN, which employs about 1,000 people – was shut down on 5 May, two days after World Press Freedom Day. Today, Duterte has issued a warning for journalists who don’t follow quarantine rules to be “shot dead.” “A few people have died, tens of thousands have been arrested,” Ressa said.

In March, the country’s House of Representatives passed an anti-terror bill that allows any critic of the government to be designated a terrorist, arrested without a warrant, and held for up to 24 days.

“For the Philippines, and many other parts of the world, technology has enabled the rise of authoritarian, populist style leaders who divide and conquer,” – Maria Ressa

“If you’re a news group, standing by the values, standards, ethics and mission of journalism is actually good business,” she continued.

Ressa pointed out that most news groups in the Philippines are in the political middle without an apparent Left or Right leaning. In the past, readers came directly to news companies for information because of credibility.

“However, now, social media has become a big source of news and polarity is the very essence of its growth strategy. If a reader is pro-Duterte, Facebook will encourage you to make friends with people who also like Duterte,” said Ressa. “After a point, the reader no longer sees anti-Duterte content or news, and vice versa.”

How can publishers create a safe environment for healthy public discourse when the environment is toxic and polarising? In Rappler’s case, Ressa said that disinformation networks are government allies.

“We are exposing them. The problem with influence operations is that, combined with technology, it polarises society and if you try to give the readers a fact check, they won’t budge because it plays to their cognitive bias,” said Ressa. “Unfortunately, social media platforms prioritise lies, laced with anger and hate. Misinformation is distributed faster there and a lie told a million times, becomes a fact, and if facts are debatable, society becomes polarised.”

For more takeaways and analysis from the World Media Leaders eSummit, download our easy-to-digest slide deck report (free for WAN-IFRA Members and available for purchase for non-members).

So, what is the solution? For Ressa, before COVID hit, 2020 was to be the year that technology was going to be held accountable. “I still push for enlightened self interest in technology platforms and think that is the silver lining of the pandemic for them – they are doing things they never would have done for political disinformation,” she said.

Rappler’s response to the pandemic

Manila-based Rappler, which was launched in 2012 with 12 people, now clocks 14 million uniques and employs about a 100 people, including 63 women.

Even though the present appears dystopian, Rappler learned to embrace technology early on and grew from 100 to 300 percent year-on-year from 2012 to 2016. “Our Venn diagram is an intersection of professional journalism, technology and community, and Rappler sits smack in the middle of it,” Ressa said.

The blue line (in the graph) represents Rappler’s revenue, the red line represents spend and the orange line is EBITDA. When Rappler was launched in 2012, its goal was to break even by 2016. In April 2016, a month before Duterte was elected and the attacks against Rappler began, the publisher saw its first month of net positive income. Even though the company hit positive EBITDA, the attacks from the government scared away advertisers.

“By 2017, I realised the attacks were far from over and hired people to build a new tech platform,” said Ressa.

In January 2018, the government tried to shut down the company, revoking its license to operate. By April 2018, Rappler’s advertising dropped by half and employees took a 20 percent pay cut. The brand was forced to pivot and find a B2B model, using data and tech, that led it to make money in 2019.

According to Ressa, advertising is not just crumbling – it’s dead; and media organisations that are only reliant on advertising and don’t have diversified revenue sources will certainly suffer.

When COVID-19 hit the Philippines, the country’s health system collapsed, resulting in a strong lockdown. In March, Rappler had three teams exposed to Members of Congress in the Senate who were declared COVID positive.

To rewatch sessions from the World Media Leaders eSummit, please fill out this form.

“We were under attack from the government. I had to figure out if we had enough money for medical exigencies. Each manager took care of their teams, and maintained medical sheets. That’s how closely we were monitoring our employees. How do you reinvent journalism when you’re stuck at home? With data,” Ressa said. “Now that we are thinking of going back to the office, we had to figure out physical distancing, PPE, etc.”

While constructive journalism might be the way to go for Rappler, accountability journalism is still its soul.

“Investigative journalism is more important today than ever, against the greater powers of the government and the kind of abuses that tech platforms allow. It is more dangerous to be a journalist today,” said Ressa.

“Studies show that anger and fear spread the fastest on social media. What spreads second fastest is inspiration; and where does hope come from? It comes from courage,” – Maria Ressa

Rappler has had a link between citizen journalism and professional journalism, ever since it was launched. The company’s civic engagement arm, Move.PH, engages with communities, finds out their concerns, and runs workshops around those pressing issues.

“You have to know what your community wants, but at the same time how it fits into the context of our nation,” Ressa said.