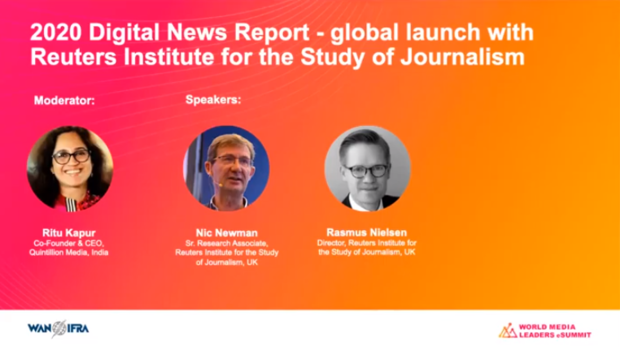 By Neha Gupta and Elizabeth Shilpa

The annual Digital News Report released by Oxford’s Reuters Institute for the Study of Journalism after conducting a survey across 80,000 respondents found that formats such as newsletters and podcasts have seen significant growth during the pandemic-induced lockdown.

The survey was conducted across 40 countries and spanned six continents. The study, published every year capturing trends in global digital consumption patterns, this time included Kenya and The Philippines as new additions.

The first round of the survey was conducted in January/February when the pandemic was in its nascent stage. A second round was conducted in April in six countries (US, UK, Germany, Spain, South Korea, Argentina) to understand:

Nic Newman (Senior Research Associate) and Rasmus Kleis Nielsen (Director) from the Reuters Institute joined WAN-IFRA for a panel discussion based on the report during the World Media Leaders eSummit. The session was moderated by Ritu Kapur, co-founder and CEO, Quintillion Media, India.

In fact one of the main trends witnessed in the study this year was the growth of these daily updates, which are especially popular among older readers. The pandemic has given a boost to newsletter culture, which has been helping to drive frequency. As Newman pointed out, The New York Times, for instance, finds its recently relaunched “morning updates” nearly as important as its front page.

If newsletters connect with an older audience, podcasts are the publisher’s way to reach out to a younger audience. Podcasts used to be the commuter’s door to news while on the go. But despite the lockdown and the subsequent work-from-home culture kicking in, the popularity of podcasts hasn’t diminished, according to the study.

“News is actually a category that has done best during the lockdown and some of the hits have been NPR Coronavirus Daily, Coronavirus – The Latest, The Coronavirus Newscast among others. People say that they really value the depth and understanding that podcasts can bring,” – Nic Newman

In times of crisis, people have been shown to turn to trusted and reliable brands, before falling back to a level still higher than the starting level. All media sources such as TV, online, social media, in countries that were part of the second round of survey, showed a hike in consumption. The only exception was print, which has been hit hard on the distribution side.

“However, the biggest impact of coronavirus is likely to be economic, especially for advertising revenue dependent media. A consequence of this is likely to be an acceleration towards online and paid content,” Newman said.

Reuters pre-pandemic tracking data from January shows a significant global increase in payment levels. Notably, in the US, the figure for people paying for online news went up 4 percent to 20 percent (a number that has doubled in the past four years). Norway saw the figure surge 8 percent to 42 percent. Similar spikes were seen in European countries, Latin America and parts of Asia as well.

Between a third and a half of the subscriptions in the US, the UK and Norway go to a few big national brands such as The Times, The Sunday Times and The Telegraph in the UK, and the NYT and The Washington Post in the US.

The primary reason for people subscribing to news is driven by the distinctive nature of the content (65% US, 64% UK, 44% Norway). The secondary motivation is convenience and price; for instance, The Washington Post’s subscription bundled with Amazon Prime. (57% US, 58% UK, 51% Norway).

A third motivation is to support journalism. For example, in the US this was a key factor for over half of the people who are paying, Newman said. “This may be because people feel journalism is under political attack and needs supporting,” he said. “Certainly in the case of local journalism – if you don’t support it with money, local journalism might not be around. (52% US, 39% UK, 21% Norway).”

The survey found that 80 percent of the respondents in the three countries were likely to re-subscribe this time, next year. So, what might encourage more people to pay for news? Again, comparing the US, the UK and Norway, the survey found that valuable content, ad-free content, flexibility and price are all motivators.

“Perhaps online news is seen as too expensive compared to other kinds of media such as Netflix and Spotify. Incentives such as family subscriptions might encourage people to pay, too,” Newman said.

Half of those not paying for news in the US and the UK say that nothing could persuade them to change their minds. “For many people, free content from public and commercial broadcasters suffices,” said Newman.

While the pandemic has rendered local newspapers particularly vulnerable, the survey found that readers around the world still care about local news. Seventy-one percent of the respondents said they access some kind of local news on a weekly basis.

Newsrooms, globally, have witnessed cutbacks and temporary closures. In some cases, publishers have stopped printing altogether.

Even before coronavirus weakened the business side of news companies, people were increasingly turning to “non-news media” – Facebook groups, local politicians, council police and social media feeds for news, forcing regional publishers to lose the monopoly they had over the news coverage in their ambit.

The study shows that there are significant differences in the perceived value of local news across countries, which makes it harder for regional publishers to charge for news.

The survey found that even amongst regular local news consumers, only about half the respondents in Germany (54%) said they would miss their newspaper or website, if it were to be discontinued.

Trust in news becomes particularly critical now that the journalistic business model is moving towards direct reader payment online. Even though the coronavirus crisis saw trust in media shoot up in several countries, it also saw that trust plummet shortly after.

Reuters’ year-on-year tracking data (from January 2020) shows a global fall in trust, compared to 2019. Only 38 percent of the respondents said they trust most news most of the time. The number was slightly higher at 46 percent for the news people use themselves, while search and social media ranked the lowest on the trust scale at 31 percent and 22 percent.

There are stark differences in global trust levels. Finland and Portugal emerged at the top with 56 percent of the respondents from each country saying they trusted most news, most times, whereas Korea and France were at the bottom with only 21 percent and 23 percent trust in news.

Countries that have been fraught with political turmoil during the past year recorded significant dips in trust. Hong Kong, which saw protests over the extradition bill, had a 16 percent dip in trust, Chile, which had protests over inequality, recorded a 15 percent fall, and the UK saw a 12 percent decline due to divisive politics and Brexit.

The growth of partisanship has raised new questions about whether the media should try to be neutral in its coverage or take sides on big issues such as Black Lives Matter, climate change etc. The survey data, this year, showed that despite a rise in partisanship, the vast majority of respondents still say they prefer news that at least tries to be neutral or objective.

This seems to be especially true in countries with a tradition of impartial public broadcasting, for instance Germany, Japan, UK and Denmark. It holds slightly less true in countries such as Brazil, the US and Spain. The percentage of respondents in the US saying they prefer news that shares their point of view jumped from 6% to 30% from the last Reuters survey conducted in 2013. “Even here we see a silent majority; 60 percent that holds on to the idea that news should at least try to be impartial or objective,” said Newman.

This debate is also heavily influenced by generational differences. People between the ages of 18 and 24, and 25 and 34 seemed significantly less likely to want news with no point of view (51 percent, 52 percent) and a little bit more likely to want news that shared (32 percent, 34 percent) or challenged (17 percent, 14 percent) their point of view. “Over time, this could prove to be a significant challenge for many newsrooms,” said Newman.

“On deeply divisive issues, there’s always no clear neutral point of view. The number of organisations that have been successful often express an identity, political culture, class,” said Nielsen. “For instance, The New York Times and The Guardian. The most widely used sources of news are very often such legacy broadcasters.”

Misinformation has been a major issue for a while, nevertheless, newspapers might in fact find an opportunity there.

The majority of the respondents, about 56 percent, said they found it difficult to know what to believe online when it comes to news.

Across countries, the highest level of concern was around Facebook followed by messaging apps like WhatsApp, online search, YouTube and Twitter although there were country level variations. For example, if misinformation through Facebook was of bigger concern in North America and Europe, WhatsApp was a much bigger problem in countries such as Brazil, Chile and Malaysia.

“Closed messaging apps are a real issue because it’s often much harder to see what’s going on in these closed messaging environments,” Newman pointed out.

There is no doubt that platforms are of growing importance to publishers and a group of smaller platforms such as Snapchat and TikTok which are growing in certain markets makes it even more challenging. While this year’s survey showed Facebook’s reducing importance in the context of news due to its algorithm changes in 2017-18, the importance of YouTube and Instagram grew significantly.

“We don’t have TikTok on this chart, but we are also seeing that picking up as a news source in some countries,” Newman said. The fact that only 30 percent of respondents across countries said they preferred to go directly to the publishers’ website for news also tilts the balance towards the social networks. As Newman pointed out, the convenience and pull of social platforms and search is increasingly strong for many people, particularly for younger groups.

However a silver lining for news publishers is that people’s trust issue with such channels might still leave them an opportunity to tap into.

“So far publishers provided content for free, for reach. But there’s a social conversation around it in many countries now,” Nielsen said. “Trust in news provided by publishers is more than that in social media, which might create an environment for this conversation. People are more worried about platforms when it comes to misinformation. Might there be an opportunity for publishers to say we are offering something else, valuable, that’s worth paying for and constantly build a relationship with the reader?”

WAN-IFRA Members can download our new playbook for publishers report, which was produced from insights from a spectrum of news media companies such as The Wall Street Journal (USA), the Financial Times (UK), The Globe and Mail (Canada), Schibsted (Scandanavia), Nine (Australia), The Straits Times (Singapore), among others, part of the World Media Leaders eSummit, to help publishers fight the pandemic. The report is available for purchase to non-members.