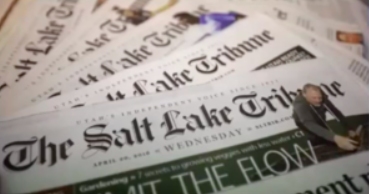 The Tribune has since launched individual and major gifts programmes, and has now received more than 3,000 individual gifts this year, according to Tribune Editor Jennifer Napier-Pearce.

“We are 60 percent on the foundation’s side, and on the Tribune’s side, we’re also doing really well,” she told participants during an online session of WAN-IFRA’s recent World Media Leaders eSummit.

For more takeaways and analysis from the World Media Leaders eSummit, download our easy-to-digest slide deck report (free for WAN-IFRA Members and available for purchase for non-members).

“The wild card is really ‘What is COVID going to do for our long-term projection?’ … We don’t know what philanthropy is going to look like in the second half of 2020 and going into 2021 as the economy continues to rebuild,” Napier-Pearce said.

Reader revenue, traffic on the rise

Like many other news publishers, The Tribune has also seen substantial reader revenue increases since the COVID-19 crisis began.

“Our digital subs are up 30 percent. Our traffic is up. Our unique views and pageviews are both up more than 30 percent from last year at the same time, so we’re encouraged that people want to come to us when they need this really critical information,” – Jennifer Napier-Pearce

So how did they get to this point?

In 2016, a local businessman named Paul Huntsman bought The Salt Lake Tribune, and while the first two years went well, a major decline in advertising revenue in 2018 forced the layoffs of about one-third of the newsroom, Napier-Pearce said. Taking a long-term strategic view, she said Huntsman began looking for ways to help make the nearly 150-year-old Tribune sustainable for another century.

“After maybe six months of searching, we came up with a model that would work for him,” she said. “He was willing to deed over his ownership to the community and become a nonprofit. So we had these two pieces that we thought would present a solution for long-term sustainability.”

One part involved creating an endowment fund. To do this, in April 2019 The Tribune applied to the U.S. Internal Revenue Service for non-profit status for a new foundation, which was approved last August, she said.

The next step was the transitioning of the newspaper itself, in order to “open the doors to some grants that we were not eligible for and allow donations to augment our existing advertising and circulation strategies,” Napier-Pearce said.

This was something that had never been done before in the United States.

The Tribune applied to become a non-profit in May 2019 and received approval in late October.

New board, policies and proceedures

“That’s when the heavy lifting really started,” she said. “All of the different pieces that had to come together for us to be able to transition our newsroom. Instead of a single owner, we now needed to build a board of directors that reflected the community. … We ended up with nine board members who are exceptional, very engaged and supportive.”

The Tribune also needed to implement new accounting procedures because nonprofits are governed by a different set of laws, Napier-Pearce said.

Furthermore, The Tribune’s management then had to learn about things such as grant management, and get familiar with new policies around issues like gift giving and fundraising.

“Our community also had a new set of expectations from us, even though we’ve been in the marketplace for almost 150 years, this non-profit identity changed the perception,” – Jennifer Napier-Pearce

“People wanted to be involved in the newsroom in a little bit of a different way. So pre-COVID, we started focus groups, and we started some cottage meetings and town halls and things like that live and in person. Post-COVID, we’ve had to shift all of that to our virtual environment. Fortunately though, our audience still feels very engaged and they want to be part of what we’re building here.”

A major challenge has been developing a donation / subscription strategy. “We’ve had a digital subscription since 2018, and now we’ve got this additional donation piece and how do we explain to our readers what the difference is and what the opportunities are for them to help support the newsroom that they enjoy?”

Since March, Napier-Pearce said The Tribune has added about 3,000 new digital-only subscribers. She added that this had occurred even though the paper dropped its paywall on essential coronavirus coverage and fewer people were hitting their meter.

“That tells me our audience really values this information: they need it, and they are willing to pay for it,” – Jennifer Napier-Pearce

The Tribune also has combined its donation and subscription efforts.

“We decided to create what we’re calling the Subscribing Supporter Program, which gives you the basic subscription (which costs $7.99 a month) but adds a little bit of stuff on top of it.”

While the programme was launched only in early June, Napier-Pearce said they were already seeing success with it.

“Most people are choosing the annual subscription Subscribing Supporter package, which is really heartening because that gives you a little bit of long term coverage – it’s over 50 percent signing up for that. We’re really encouraged by that.”

In addition, they launched a membership group called the First Amendment Society, which she described as a group of people who donate at a higher level.

These donors pledge a minimum of $1,000 a year for three years, and it goes up to $10,000 a year. She said these donors receive additional behind-the-scenes, insider information, newsletters and so on.

While this initiative is also quite new, Napier-Pearce said it is off to a very encouraging start.

“We’re hopeful that we can get up to 150 members, which would be a significant revenue stream for us going forward,” – Jennifer Napier-Pearce

In addition, The Tribune is pursuing grants and partnerships. “We’ve had some really great success with our national partners in addition to some local foundations who have supported us,” she said.

Likewise, they collaborate with a local radio station and a local TV station.

“We have content-sharing partnerships with them, so their reporters are helping us, and we’re helping them, and so far, so good. Those partnerships have been in place for maybe a couple of years,” Napier-Pearce said.

Lenfest Institute: working with the Philly Inquirer as a ‘tech kitchen’ for COVID innovation and more