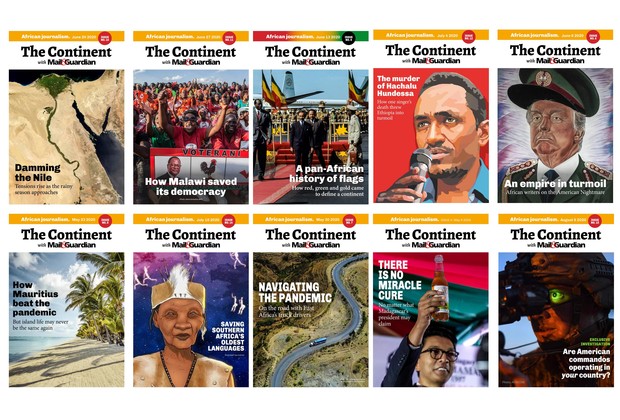 Plagiarised digital copies of some of South Africa’s leading weekly newspapers started making the rounds the first weekend after the country went into a strict COVID-19 lockdown at the end of March.

At the same time, there was a “particularly pronounced” amount of fake news circulating on WhatsApp.

While it’s still not clear where or how the breach in the production process happened, being forwarded a PDF version of South Africa’s Sunday Times on WhatsApp got Mail & Guardian (M&G) journalists Simon Allison and Sipho Kings thinking.

That is how The Continent—a Pan African weekly newspaper produced in partnership with the M&G—came to life. The PDF publication features news from across the African continent and is easily shared and read on mobile phone screens. The articles are short, on average about 250 words and a news edition is distributed mainly on WhatsApp every Saturday.

“WhatsApp was almost always the source of fake news and that’s when we realised that we had to start thinking very seriously about how we can get our credible news onto WhatsApp. Sipho and I started asking ourselves what product can we make that can showcase the news that we’re doing in a way that works on that particular medium,” explains Allison who is M&G’s Africa editor and co-founder of The Continent. Allison has become the de facto editor of this new publication and says there hasn’t been any time to set up formal structures because the idea executed within two weeks.

While Allison liked the idea of reading a newspaper on his mobile phone, the pinching in and out to better read was not a great user experienced. “Reading an online article is not like reading a newspaper,” he adds. “It’s a very different experience because a newspaper is curated that stories are intentionally put where they are. We wanted to create the feeling of a newspaper without leaving your house to get it.”

WhatsApp as the perfect medium

WhatsApp is the most popular messaging app in most English-speaking countries in Africa and it’s sometimes the first app most people download when they get a new smartphone. The platform has garnered interest from various media entrepreneurs looking for ways to reach readers and audience in the most intimate ways. For instance, Zimbabwean publisher Nigel Mugamu started 263Chat—an ad-based free news service that distributes articles via WhatsApp groups to thousand of its subscribers— in 2012.

WhatsApp’s draw card is its ability to reach people in an intimate way. Users are able to control who and how they interact on the app. Media scholars argue that the platform allows large numbers of people to communicate in group discussions like other social media platforms such as Twitter, but in a more private manner where users have more control over who sees their content.  The publication’s cross-border nature also circumvents the power repressive African states may exert over their citizens as compared to other traditional forms of media such as newspapers and television.

According to media researchers, WhatsApp’s encryption means it cannot be monitored and censored in the same ways as newspapers, Twitter or Facebook. “WhatsApp has strengthened the hand of opposition parties and civil society groups that have historically faced repression, and this disrupts the status quo.”

A digital copy is almost entirely uncensorable by authoritarian governments, which has been one of the publication’s unexpected strengths.

“A PDF newspaper can slip past borders and can be shared by people without governments being able to see. Ultimately, that might be the most powerful aspect of this way of publishing,” Allison says.

As print media organisations try to find new revenue models for the digital era, monetising these products has been an uphill battle. The Continent is yet to explore any revenue-generating models, and at this stage the weekly publication doesn’t even carry any advertisements. It’s mostly self-funded with some financial support from the Konrad Adenauer Stiftung and the National Endowment for Democracy. Advertisements are not completely off the table for the publication in future, but it’s difficult to track the publication’s reach when it’s shared through WhatsApp.

“We aren’t able to track how many people are reading the publication in the way that you can with websites. But we’re able to find out how people engage with the content through getting feedback from readers,” Allison says.

The Continent has published 15 editions since launching in April and sends a new edition to close to 8000 of its subscribers (equally split between email and WhatsApp subscriptions) who are based in about 48 African countries—with most readers in Nigeria, Kenya and the Southern African region, says Kiri Rupiah, the M&G’s online editor who is in charge of The Continent’s digital and distribution unit.

While it’s not yet clear how they plan to monetise the publication, Allison says it’s still early days. “We do believe that this is a model that can generate revenue, but the key stumbling block is knowing how many people we are reaching and finding a way to measure the exponential sharing of The Continent has because of the nature of WhatsApp medium. Those are numbers that we can take to advertisers and get real money.”

The distribution costs on WhatsApp are very low, even when switching from a free-to-use WhatsApp Business account, limited to businesses with 5 000 users, to the WhatsApp API, with an unlimited number using, and costing from about $200 per month.

Rupiah says manually distributing each edition is time-consuming work, however, it works for them. At the time of the launch, The Continent didn’t have money to register for the WhatsApp API, but apprehension about bots also influenced this choice. “There always needs to be a human in the loop. It’s important to talk to readers so we can gauge how they feel about our product,” she explains.

But relying too much on WhatsApp can be disastrous. In September, Business Insider South Africa was forced to end its daily morning WhatsApp newsletter after the messaging app decided to enforce its terms of service, specifically keeping the platform purely for personal communication instead of bulk messaging.

Whether they like it or not, The Continent will have to switch to bot soon as they creep closer to the 5000-limit on WhatsApp Business. “We’re a boutique service. Not an expensive hotel but rather a mom and pop store where you always go because you know you can trust the quality because you know the people.”

When it gets more revenue, The Continent plans to expand into other languages such as KiSwahili or French, to serve more African readers. It recently experimented by publishing a story about the current unrest in Zimbabwe in Shona.

The author, Pontsho Pilane is an award-winning South African journalist.