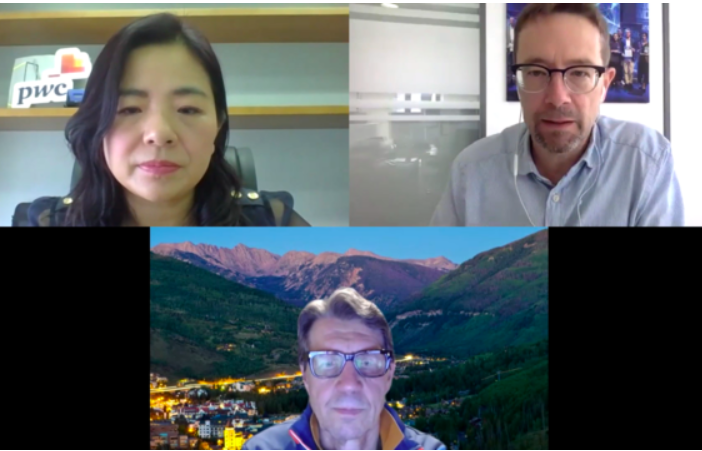 In this panel discussion, moderated by WAN-IFRA’s Director of Insights, Dean Roper, speakers discussed the potential for “U” shaped or “V” shaped recovery curves.

Yau, a Partner and the Mainland China and Hong Kong Media Leader at PricewaterhouseCoopers, said a “V” shaped recovery curve would be the best-case scenario for the industry.

In this scenario, public lockdowns would last only two months and the economy would recover fairly briskly, returning to “normal” in 2022, she said.

In what Yau called the “core case” scenario, public lockdowns lasting three to four months would result in a “U” or “W” shaped recovery curve. The hit to both consumer and advertising spending would be terminal for many media companies.

“It is likely that China will be one of the best cases, and recovery in Hong Kong and Tokyo, could be something like the ‘W’ shaped curve,” she said.

Harding, a Senior Managing Director in Telecommunications, Media & Technology at FTI Consulting, had a more sobering take on North America.

“It’s clearly not going to be V-shaped. It’s going to be a U, or an extended U,” he said, predicting an unrecovered advertising revenue loss of between 17-28 percent as a result of COVID-19 by the fourth quarter of 2021.

“We get a lot of questions: ‘Will this come back?’ Well, the trends are going to improve, but we’re going to reset the base and that really results in that 17-28 percent unrecovered advertising loss,” – Ken Harding, FTI Consulting

Early reopenings in the U.S. have created an additional decline in projected revenues that Harding expects to fall even further.

Performance of newspapers vs Out of Home media

FTI looked back at the performance of two different legacy industries – newspapers and Out of Home (OoH) – after the 2008 recession as the most recent proxy for what could happen, Harding said.

FTI found that print media suffered more significant losses and a slower recovery than OoH media. Harding said that this suggests print media could fare worse than other sectors post-COVID.

Both speakers said that consumer revenue would be the industry’s saving grace.

“It’s a great thing that we actually have consumer revenue. If we had been the industry of 10 years ago where we were at 80 percent advertising revenue – it’s serious now, but it would be extremely serious,” – Ken Harding, FTI Consulting

FTI’s forecast predicted an even greater swing to a consumer-led business, with print advertising falling from 31 percent in the first quarter of 2020 to under 20 percent in 2021. It projected that print circulation will grow to 50 percent, with total consumer revenue growing to 62 percent after the pandemic ends.

Yau echoed many of these findings.

“Most consumer-type entertainment media segments are performing quite well, especially the digital ones, however the advertising side has been badly impacted, especially physical advertising,” she said.

While Yau noted that segments like OTT and video games were doing well, she cautioned that prolonged lockdowns could still limit content and cause consumers to cut back on OTT subscriptions, and also result in supply chain disruptions for hardware.

Both speakers said the crisis has accelerated the digitisation of the industry.

“Digitisation has been high in China already, especially from the e-commerce side. However, during this pandemic, you can see people have expanded their digital experience to areas like e-learning and telecommuting, with over 70 percent of Chinese consumers trying new online activities,” – Cecilia Yau, PricewaterhouseCoopers

Harding said FTI’s view was that whatever path a news company was already on – in terms of the transition to digital – is probably now accelerated by two years.

Despite the disruption to offline advertising, Yue said COVID-19 has been an opportunity for industry leaders to further expand in a good pricing environment.

China’s largest offline advertising provider, Focus Media, had adequate cash flow and chose to increase their investment in indoor advertising channels, such as billboards in the lobbies of commercial buildings.

Citing the recent bankruptcy auction of the McClatchy Company, Roper asked the speakers about the prospects for more mergers and acquisitions happening soon.

Yau said she expected more action. “The major entertainment media companies in China are internet-based and rich in cash, so they are looking for good targets for their acquisition and keen to go into new areas such as education,” she said.

Meanwhile in the U.S., Harding said that over half of the newspaper industry could eventually be owned by private equity.

In terms of chasing other revenue streams, Harding said that while digital marketing services are difficult for publishers to make decent margins on, they seem to be pushing hard on branded content.

Yau said that while digital services could be a way out, the margins are low and take time.

However, social media groups in China have been taking the opportunity to move the marketplace onto their platforms, she said, with the Chinese version of TikTok and even Alibaba hosting live shows where celebrities or key opinion leaders sell products.

“Reader revenue is still the number one, but I don’t know if that’s going to be enough to sustain the industry,” Harding said.