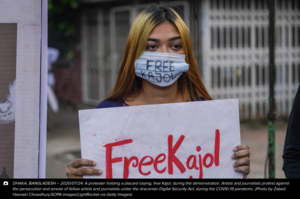 We, the undersigned group of civil society organisations working to promote and defend freedom of expression and information worldwide, are writing to express concern over the treatment of renowned journalist Shafiqul Islam Kajol including his disappearance, the charges against him under the Digital Securities Act, and current imprisonment.

We are calling on you, as prime minister, to immediately address these concerns, and personally intervene to ensure the safety and immediate release of Shafiqul Islam Kajol from prison. Considering the repeated overreach by authorities to arbitrarily arrest people, we also urge you to take steps to repeal the Digital Security Act.

It has been over 140 days since, Shafiqul Islam Kajol, a Bangladeshi photojournalist and editor has disappeared, been “found,” and been taken into custody. There is strong evidence to suggest that while Kajol was missing, he was in the custody of security forces. The manner of Kajol’s disappearance and the multiple charges that have been brought against him under the draconian Digital Security Act, raise serious human rights concerns.

The day before his suspicious disappearance on March 10, 2020, Kajol was one of 32 individuals subjected to a criminal defamation complaint by a member of parliament of the ruling Awami League, Saifuzzaman Shikhor. Kajol was accused under the Digital Security Act of publishing defamatory news about Shikhor in a social media post. His disappearance, and suspected torture, appear to be heavily connected.

On May 3, 2020, 53 days after he disappeared, Kajol was “found” by the border-guards in Benapole, a town near the Indian border. Kajol was 150 miles away from Dhaka where he was last seen. He was discovered in a field, blindfolded, with his legs and arms bound.

While finding him alive was a great relief for his family and friends, it has not marked the end of his ordeal. Kajol has been charged in four different cases against him: three under the Digital Security Act, an additional charge of trespassing , and was further held under Section 54 of the Criminal Procedure Code. On the charges brought against him under the Digital Security Act alone, Kajol faces up to seven years in prison.

After Kajol was found, he was accused of attempting to illegally cross the border and charged with trespassing. A court ordered that Kajol be granted bail, but the authorities have refused to release him. Instead, he was arbitrarily detained under the widely criticized Section 54 of the Criminal Procedure Code, a law used to detain anyone under suspicion, without requiring evidence or proof, in order to justify his extended captivity.

Furthermore, the RSF Word Press Freedom Index ranks Bangladesh 151 out of 180 countries, and explicitly criticizes the Digital Security Act, calling it a “custom made judicial weapon for silencing journalists.” Amnesty International has stressed how the Digital Security Act violates the International Covenant on Civil and Political Rights, a treaty to which Bangladesh is a party.

In addition to the political attack on Kajol’s freedom of expression, we are deeply concerned about Kajol’s health and the increased risk he now faces of contracting Covid-19 in Bangladesh’s overcrowded prisons. Although the prisoner capacity in Bangladesh is around 41,000, the current number of prisoners is approximately 90,000. While 45,000 inmates have been granted bail in the last 30 days in order to stop the spread of Covid-19 in the prisons, Kajol’s case has been rejected time and again. The World Health Organization (WHO) has raised the alarm on the troubling Covid-19 death rates in the country and civil society organisations from all over the world have called on states to release journalists among these unprecedented public health risks. Due to the outbreak of the virus in Bangladesh, courts are operating at limited capacity and Kajol’s trial could be put on hold indefinitely.

You recently urged Bangladeshis to show humanity and stay at home in order to contain the pandemic. We ask that you show the same humanity be to Kajol by:

We know how busy you are during this difficult time, and we would appreciate a response regarding this unsettling case.