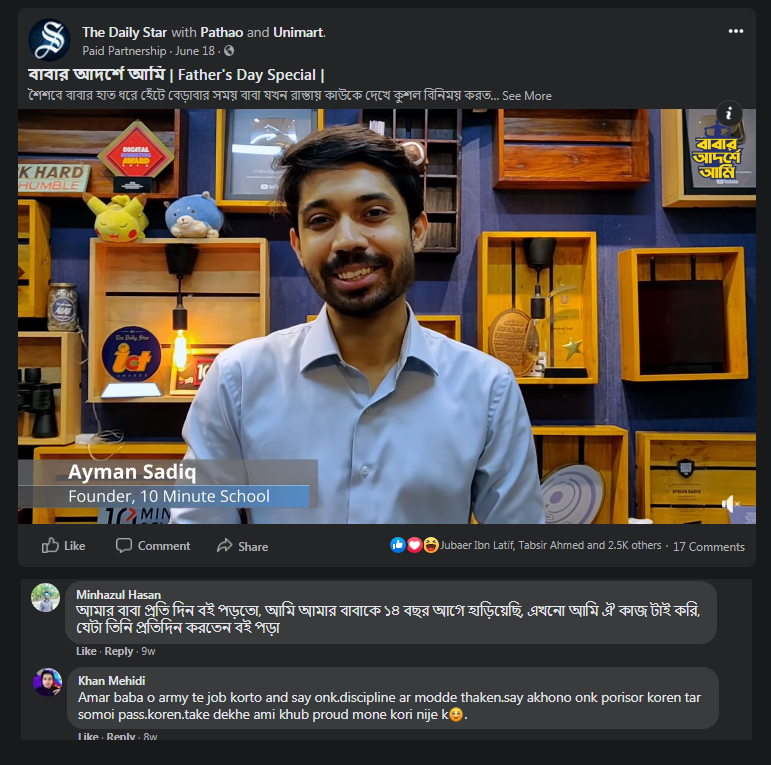 Newspaper circulation is declining, businesses are not spending on ads and there are problems clearing payments. While living up to their daily duties, journalists are exposing themselves to a plethora of threats due to COVID-19. In times like these, when the newspaper industry over the globe is swedging, The Daily Star has persistently tried to come up with initiatives to engage its readers.

‘Desh Gorar Karigor,’ a digital campaign initiated by The Daily Star marking International Labor Day kicked off on 1 May. For this campaign, the daily partnered with Guardian Life Insurance, a leading insurance brand in Bangladesh.

The informal sector of the country was severely impacted by the outbreak of COVID-19. The laborers lost their sources of income due to the country-wide lockdown and there was no foreseeable end to this crisis period.

Videos and other posts were published on social media portraying the significance and impact of these laborers in our day-to-day lives. The partnership and powerful storytelling strategy helped to raise significant amounts of funds for ‘Mission Save Bangladesh.’

This campaign set an example of the positive impact of storytelling in the digital era and leveraged the core strengths of a publisher during a crisis time. 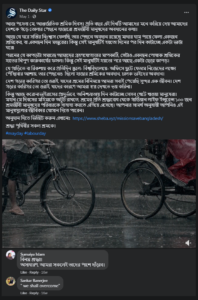 ‘Bondhutte Bondi’ is a digital campaign marking International Friendship Day initiated by The Daily Star. In this campaign, The Daily Star partnered with two rising brands of the country- Pathao and ShopUp which have made their mark in the digital sphere.

The closure of educational institutions, offices, and all other public places have restricted the physical interactions with our friends and closed ones. However people have been connected with their friends with the help of technology. Video calls, fun online classes, online game competitions and 10-days-challenges became our new exciting ways to connect with friends all day.

The campaign Bondhutte Bondi (Locked in Friendship) was to celebrate this new picture of friendship and to spread the spirit of friendship to every corner of the country through storytelling. A microsite  was created for the campaign where participants shared funny and memorable stories of their virtual friendship moments. People could vote online for their favorite stories and 10 winners were selected based on public votes.

The microsite had a unique feature which was a “Friendship Map”. A digital map of Bangladesh was created showing 64 districts of Bangladesh. There was a ‘district-selection’ option while participating in the campaign. With each and every participation, one “heart-sign” was added in the district from where the participants were taking part. Within a few days, the map was filled with heart-signs.

The campaign exemplified the power of user-generated-content and storytelling and how to turn it into an impactful visualization. 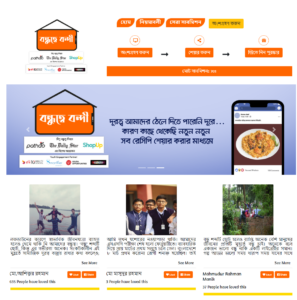 The Daily Star, Pathao, and Unimart collaborated to initiate a digital campaign called ‘Babar Adorshe Ami.’ This campaign marked International Father’s Day which was observed on June 21, 2020. The idea was to engage the young netizens by asking them to share what was that inspiring trait of their fathers that they carried with themselves to be a better person.

The campaign was launched on June 18 on the official Facebook page of The Daily Star. Two well-known influencers — Ayman Sadiq, founder of ’10 Minute School’ and Sayed Zaman Shawon, a popular TV actor — were the ambassadors. The video stories of these influencers inspired the youth to share their own stories with the world.

The rule was to upload a picture with the father along with the story. The campaign which ran for six days received more than 500 entries. There was also an online voting system for individual stories and ten winners were selected based on the number of votes received from the readers. The top three stories got more than 3000 votes each, which was an overwhelming feat.

It was ensured that the core strength of the three collaborating brands were leveraged. The Daily Star being the leading publisher in the country, leveraged it’s online media presence to drive engagement. Winners received free coupons from Unimart, a trusted retail store in Bangladesh. And Pathao being a trusted name for delivery service ensured the efficient disbursement of the gifts. All in all, it was a successful collaboration of brands in the digital sphere. 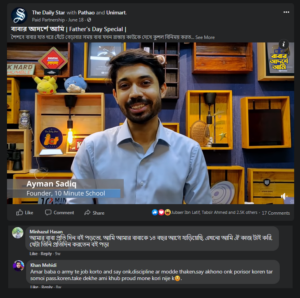 Dabur Bangladesh, in collaboration with The Daily Star, organized ‘Ghorer Eide Ronger Chhite,’ an online art competition for children, for the occasion of Eid-Ul-Fitr. The Daily Star contacted 25 schools across Bangladesh and in a span of four days, the organizers received over 750 submissions. Children aged between 4 and 13 years participated in the competition, in three categories. The esteemed judges selected three winners in each category. 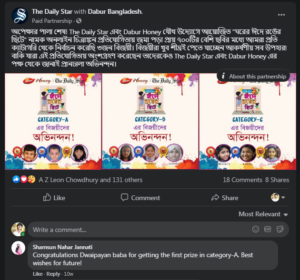 The Daily Star hosted the Youth Skills Summit 2020 on July 15, marking World Youth Skills Day, to explore ways to harness Bangladesh’s youngsters. More than 60 speakers, comprising industry leaders, entrepreneurs, and young aspirants representing different fields participated in the daylong virtual event. This year, the day — which was designated by the United Nations in 2014 with the view of creating a dialogue on the importance of technical, vocational education and training for the youth in securing gainful employment and living up to their potential — has added importance. The global coronavirus pandemic has led to closures of educational and training institutions and job cuts, leaving students and university graduates in a state of uncertainty about their careers and future. The summit featured numerous panel discussions, where experts talked about different industries, starting from technology and business to arts and culture. They guided the young attendees about the job market in these difficult times, and the different skill-sets needed to remain employable in the post-pandemic world. The event, emceed by Zunaed Rabbani, CEO, The Right Kind, and AIRN, was in association with SBK Tech Ventures, Shah Cement and Mountain Dew. Star Youth, 10 Minute School, Preneur Lab, and Youth Opportunities were the youth engagement partners of the summit.

These initiatives have proved how crucial the role of print media is. During such trying times, every publisher should ensure authentic news, as well as encourage brands and partners to support each other to sustain the industry and to help the society. 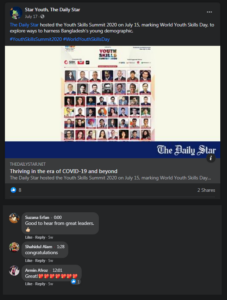 About the author: Tajdin Hassan is Head of Marketing, The Daily Star, Bangladesh.