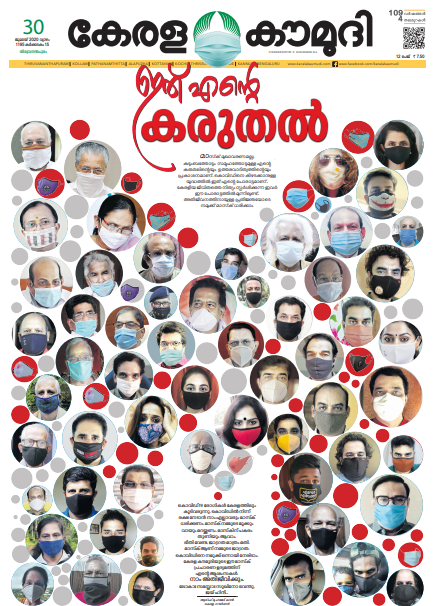 As the state continues its battle against the pandemic, Kerala Kaumudi, one of the leading newspapers in the state that publishes in the regional language Malayalam, has been trying to raise public awareness through campaigns.

With one of the reasons behind the prevalent spread of the virus being lack of understanding about the usage of masks, the paper decided to organise a mask awareness campaign.

On 30 July, the newspaper was published with its jacket cover titled ‘Ithu Ente Karuthal (This is my protection)’ featuring portrait photos of prominent people from different fields with their masks on.

“After about four months of continuous lockdown in various degrees, we could sense a certain level of fatigue in the general public. Plus people were becoming a little complacent in following the strict COVID social protocols stipulated by the authorities. Hence we decided to run a series of awareness campaigns in a lighter vein and to get the readers some hands on activity,” – Deepu Ravi, Managing Editor, Kerala Kaumudi.

The statistics revealed by the Chief Minister during press conferences showed that in a period of about one and a half months a sum of Rs 1.5 Crore (approximately 170,345 euros) was collected in fines for not wearing a mask, which translated to about 5,000 people a day being fined.

“It was in such a situation we thought about this mask campaign,” said Sajeev T.K, Visual Editor, Kerala Kaumudi.

The campaign caught people’s attention and was widely shared on social media in the following days.

“Readers were asked to send in their selfies, the mask being a work of art or as an expression of their thought. We announced that we would print the best result picked by a panel of top movie stars,” Ravi said.

The campaign got an overwhelming response with more than 1,500 readers sending in their self portraits.

“The result was so overwhelming that we ended up publishing a page full of faces the next day,” Ravi noted. The page carried images of about 100 readers with their masks on.

As readers continue to post their selfies on the social media pages of the daily, the team is planning similar awareness campaigns going forward.

“After the mask campaign we are now planning one on social distancing. Following it we would like to bring out one on the importance of handwashing. The idea is to highlight the different stages of precaution one should take against the virus,” – Sajeev T.K, Kerala Kaumudi.